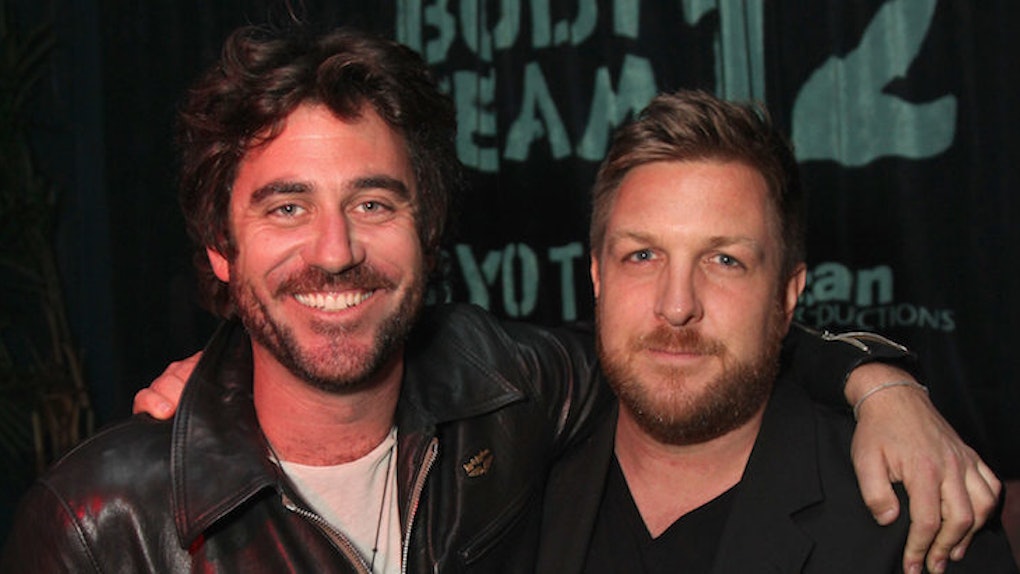 The largest Ebola outbreak in history overcame West Africa in March 2014, infecting more than 27,000 people and claiming the lives of at least 11,000. The disease, spread through bodily fluids of the infected, attacked the countries of Sierra Leone, Liberia and Guinea.

Soon after the disease took hold, flights in and out of the region were canceled; the entire world seemingly turned its back on those who needed help most.

Except for David Darg and Bryn Mooser.

David and Bryn may be two of the most relaxed men you'll ever meet. They are best friends, documentarians, a team support system, filmmakers and co-founders of RYOT.

They met in early 2000, while working in West Africa for the Peace Corps in Gambia and doing aid work in Senegal, respectively.

I went to meet the two to discuss their short documentary, “Body Team 12,” a film that has earned countless accolades before its official March release date, including a nomination for Best Short Documentary Film at the 2016 Oscars.

Inside their office in Venice, California, David sits on the couch and Bryn takes a comfortable seat on the floor; they're both so effortlessly at ease discussing their project that has the film world buzzing.

On the ground in the Liberian capital of Monrovia, Darg joined humanitarian organization Operation Blessing International to direct the development of the country's first chlorine production facility.

With chlorine killing the Ebola virus on contact, Operation Blessing distributed tens of thousands of gallons across the country in an effort to diminish the outbreak and prevent further spreading of the deadly virus.

“[At the end of the day], I was freaking out that I'd been infected,” Darg says of his time in Liberia. “I had a horrible headache, as I did every day there because it was super hot, and that anxiety really played on me."

Submerged in the severity of the situation and following media coverage of the outbreak, Darg and Mooser took notice of the aid workers wearing protective gear; they were shown in photographs, but never given due recognition. The “sinister and gnarly” images, as Darg describes them, were of body collectors, Red Cross health workers tasked with retrieving the bodies of deceased Ebola victims.

Darg's admiration for the body teams' “[willingness] to sacrifice everything for their country and for all of us” left him inspired. It was their story he sought to tell, an personal account of the utter despair in the villages surrounding Monrovia.

He requested to join the Liberian Red Cross on the body team's daily mission to remove the dead from their homes and was randomly assigned to Body Team 12, the last of 12 teams working in Monrovia. Of embarking on his first day working beside the body collectors, Darg says,

It was super intense. The Red Cross just told me, 'Wear long sleeves, and try to keep your distance.'

On subsequent days working beside Body Team 12, Darg wore protective gear and filmed the team's day-to-day happenings during the height of the Ebola crisis. He would accrue hours of footage from four trips to Liberia, which would later be edited, in self-quarantine, to 13 captivating minutes.

Two times, 21 days each, for a total of 42 days, David would remain in self-quarantine on US soil upon returning from Liberia in the middle of the epidemic. It was during this time the CDC required any US citizens returning from West Africa -- specifically Guinea, Sierra Leone, Liberia -- to monitor their symptoms and check in twice a day.

Though the dramatics of “quarantine” weren't required of him, David says,

At the time, there were reports of journalists returning [from West Africa] and then being caught in public and losing their jobs, and it was a huge scandal. … The US was freaking out. So in an effort to not be a news story in the US and lose my job, I decided it was probably best.

Bryn would join David in his self-quarantine, making somewhat of a mockery of the whole idea and actually putting himself in danger in the chance that David ultimately had been infected.

Fortunately, David came out victorious over the virus and in good health, and in addition to the resulting award-nominated film the two produced together, came to be a pretty funny story to be remembered at the end of it all.

Before offering a much too graphic photo to show here, Bryn recalls when David got bit by a brown recluse spider while at home in Venice, California during quarantine. Only now, he laughs, recounting the situation sans the stress of the moment, saying,

After three days, the quarantine would end, and David would ditch the “tough guy” facade for a hospital bed. Talking about the then-life-threatening-now-laughable situation, David says,

Ironically, it was more dangerous being in Venice than it was being in West Africa. … I was too scared to go to the doctor. I didn't want to be on the news: 'Man Returns From West Africa And Now Has Bleeding Lesions.' … [Doctors] were like, 'If you waited one more day, you would've lost your finger.'

Just being among the five other nominated films in the category for Best Documentary Short at the 88th Academy Awards makes the winding road of making this emotional film, including almost losing a finger, worth it. But it's not all about the shiny gold statue that will surely soon collect dust on their shelves.

For Bryn and David, it's about the reach; getting these stories out to an audience of any degree is where the reward lies. Bryn calls their work in the developing world "intoxicating," citing the thrill of not only being of service but also being in the face of danger and ultimately soaking up that reward. David says,

It starts as a hope that we can get the story out and grows from there. ... All of the documentary shorts we've made have come [to us when we're on the ground not as journalists but as humanitarians]. ... We're there, in amongst a lot of chaos and carnage and seeing things that maybe aren't reported in the news and traditional media, and seeing things that we feel maybe should be given a voice or a story.

This particular story, “Body Team 12,” is of an epidemic, made intimate through the eyes of Garmai Sumo, the sole female body collector on her team. Garmai, a registered nurse, became the focus of the documentary if not for her pure heroism and fearlessness, then for her emotional strength to focus on the greater good in the most selfless manner.

Darg talks about Garmai with such respect, telling of her son and how she is, essentially, a single mother, with her husband overseas in the Liberian military. Offering her aid and standing on the frontlines of this “war on Ebola” was an unfathomable inner struggle, illustrated by the mere isolation of Garmai and her son by their friends, family and community who refused to associate with the mother and son after discovering her contact with Ebola victims.

She was glimmering inspiration for Darg, a symbol of hope in an otherwise tragic setting.

It's a heartbreaking narrative, but Garmai's profound outlook on her role amongst the chaos encourages viewers through the immersive perspective through which we experience the Ebola epidemic. On the days he was able to pull her away from work, Darg would take Garmai away from the carnage. He says,

I'd try to take her somewhere nice, somewhere quiet where she could talk and decompress and tell me how she felt. Those were the moments when she did really open up and start to talk about some of her philosophy. So a lot of the film, if you listen to what she's saying, it's really deep stuff about her philosophy of life and her faith; things I found really remarkable that she could hold onto, or the fact that she had those few things left to hold onto that kept her going strong.

While Garmai was the only woman on Body Team 12, the presence of women on the body teams was required by the Red Cross. In fact, the female body collectors acted as leverage, engaging with families of the deceased who were not yet ready to say goodbye to their loved ones, using their innate maternal instincts to calm family members and to bring them to a point of understanding.

Women made the best negotiators in those situations where the families were angry and reluctant to give up the bodies, sometimes to the point of threatening [the body teams] with violence. ... [The families had] no time to process the grief, no answers as to where these people are going. The only thing they knew was that the body was going to be cremated that day. … Not only were they hugely fearful for their own lives, they were in grief with no hope for a grave marker.

You're entrenched in this horror; the magnitude of the situation weighs on your heart as you experience grave loss alongside the families affected by Ebola in “Body Team 12.” Brothers, sisters, mothers, fathers, elderly relatives and innocent children were among the lives claimed by the virus.

Only as of January 2016, nearly two full years following the first reported cases, has Ebola been eradicated from West Africa.

In a transition from tragedy to recovery, Garmai now invests her compassion in the orphans who lost their parents to Ebola, through a charity supported by Operation Blessing. Darg talks about how the charity provides Garmai with a sort of redemption, saying,

There are 3,000 [orphans] alone in Liberia that lost parents to the outbreak. And now, the program she's helping to run is providing education, scholarships, food, medical care and all that for 300 kids. She was there for all of those kids at the time. She was there carrying their parents away. It was a really tough time for the kids and for her too. But, now, for her to be able to go back and be with those kids and care for them is not only helping them, but also helping her cope with the aftermath of this whole thing.

Should David and Bryn take the stage Sunday to accept their Oscars for “Body Team 12,” they'll be joined by executive producers Olivia Wilde and Paul Allen, with whom a celebration is in order.

But it's not the Academy Award after-parties they look forward to most, crossing the finish line and introducing the film to an even bigger audience following its newfound prestige.

For David, the greatest pleasure will be delivering the award to the young Liberians who made it all possible: Body Team 12.