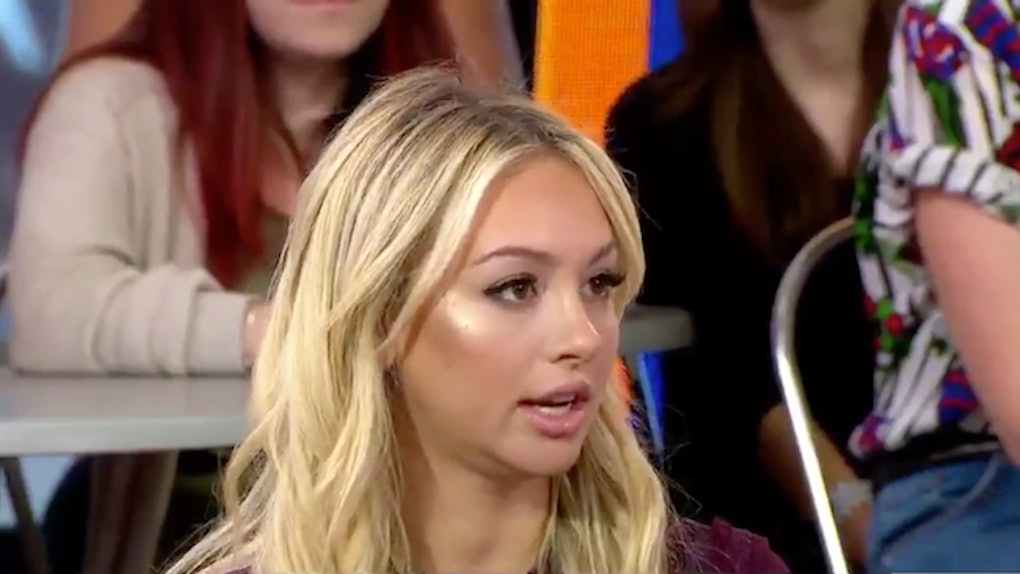 It's been months since Bachelor Nation was rocked by scandal, but despite multiple promises of explanation, we're still foggy on exactly what went down between Corinne Olympios and DeMario Jackson on the set of Bachelor in Paradise to get production shut down. And it sounds like Corinne is in the same boat as the rest of us. The reality star opened up about the incident in her first live interview since it happened on Good Morning America Tuesday morning, and Corinne's Bachelor in Paradise interview really drives home how scary the situation was for Corinne.

No, we still don't really get any illumination on what happened in that pool to bring Bachelor in Paradise to the brink of cancellation, but that's because Corinne explained she really can't remember anything from that day. Corinne shared that she was on medication that she shouldn't have mixed with alcohol, but did, and it caused a total blackout. When she watched the clips of herself and DeMario in the pool in the first episode, she said it felt like she was watching someone else.

I did drink too much. I definitely understand that. But I was also on a medication that severely blacks you out and impairs your judgment and messes with your balance. But I didn't know you were not supposed to drink on. And so I really just caused a horrible, horrible blackout. It was like I went under anesthesia and just woke up... I've seen some of the footage, and, obviously, I watched the first episode... It's like I'm watching not me. I'm watching someone else. I was, like, in shock.

But according to Corinne, the real struggle came when fans of the show and the media began chiming in on the incident. Shortly after the scandal was reported, Corinne released a statement to TMZ stating that she is a victim and was trying to put the details together from the event, which she had no recollection of. On GMA, Corinne clarified she thinks she's a victim of the media, not Paradise producers or DeMario. Corinne said there's "no bad blood" between her and DeMario, and that she's actually "super thankful" to BiP producers for stepping in when they thought something unseemly was happening. But, Corinne was annoyed by people making assumptions about her, when clearly nobody (not even her) knew the full situation.

I was a victim of just being blown into the media and having people make these crazy assumptions and judgments about what happened that day. You know, I was really a victim of the media. All of a sudden people became an expert on the situation and what happened, and it's like, 'Well, I'm still trying to figure out what happened.' It was just horrible to deal with.

Check out Corinne's full interview below:

Corinne Olympios will be speaking even more about the Bachelor in Paradise scandal on Tuesday night's new episode of BiP, so stay tuned for some more info about what actually happened in that pool.