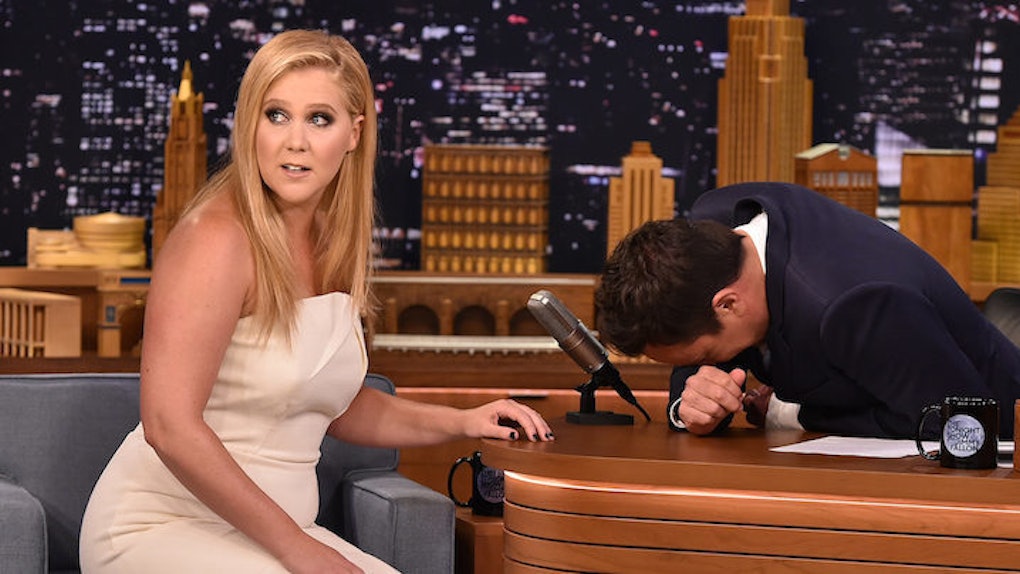 Team Schumer: 4 Reasons I'd Rather Be A Comedian Than A Kardashian

This weekend, during Amy Schumer's stint at hosting SNL, the "Trainwreck" actress poked fun at the Kardashians, saying they:

Take the faces they were born with as a light suggestion.

Amy stressed the importance of having role models of all shapes and sizes, and I couldn't agree more.

In my mind, the funny woman beats the plastic woman every single time.

I suppose that may not be true in the mind of a man, but if he has any sense at all, he'll come around to what I'm saying.

If you still aren’t convinced, here are four reasons you should pick the comedian over the Kardashian.

1. She uses her face to accentuate her hilarious jokes.

Have you ever actually seen one of those heavily made-up, surgically enhanced women in person?

I literally can’t stop staring at them and trying to figure out what exactly has and has not been “improved.” They look a bit otherworldly, and not in a good way.

If you’ve ever seen an older woman with too much plastic surgery, you know that eventually these young women are going to look like aliens.

Funny women leave their faces alone because their expressions are key tools in their humor. They also know there are more important things than looks, like landing a perfect one-liner.

It isn’t always true, but unfortunately, most of the time, that perfect-looking woman tweaks her looks to make up for a lack of personality.

If you sit her in a corner, she looks nice, but if she opens her mouth, does she have anything interesting to say?

If you’re with a funny woman, you already know you’re guaranteed to have a good time, no matter where you are.

She makes the most ordinary, humdrum events into rollicking parties.

Personally, I would rather be the life of an event than a lovely statuette.

Again, this isn’t always true. Some people use humor to hide their insecurities.

On the other hand, women who change the entire looks of their faces and bodies are definitely self-conscious. They are literally covering themselves with masks, instead of being who they are.

If people just accepted how they looked and worked with it, maybe our world wouldn't be so obsessed with perfection.

It’s infinitely more attractive when a woman moves through life with humor, swagger and an innate comfort in her own skin.

A funny woman uses her sense of humor to project her inner warmth and self-assurance into the lives and hearts of others. No one’s mad about that.

4. She’s not concerned with messing up her hair, makeup or clothes.

She has more important things to worry about, like enjoying herself and living life to the fullest.

Have you ever hung out with one of those women, who spends half your night together in the bathroom primping, and the other half making you take selfies with her?

At the end of the evening, you have a lot of perfect pictures of a night you never really experienced, and even that won’t be enough.

She’ll throw at least one filter on every single one of them.

You see, appearances matter more to her than anything else, and that’s sad.

She may look back on her life and wish she had done more, saw more and worried less about what others thought of her.

The funny woman is refreshing to be around because she’s concerned about engaging with you and her surroundings. She makes sure she, and everyone else, has a night you'll all be talking about for years to come.

If her hair is mussed or her makeup gets smudged, so what? She’s naturally beautiful because her personality rocks.

So, there you have it; real trumps fake every single time.

There’s a reason those plastic women are always together in big groups, stumbling about in their stilettos.

They're out at the club together, trolling for men and wearing the tightest dresses they can somewhat breathe in, with faces frozen by Botox.

Normal, confident and chill people simply don’t want to be around all that.

Where are the funny women, you may ask?

They’re at the bar next door, drinking beer, shooting pool and laughing their asses off with a bunch of relatable and funny dudes.