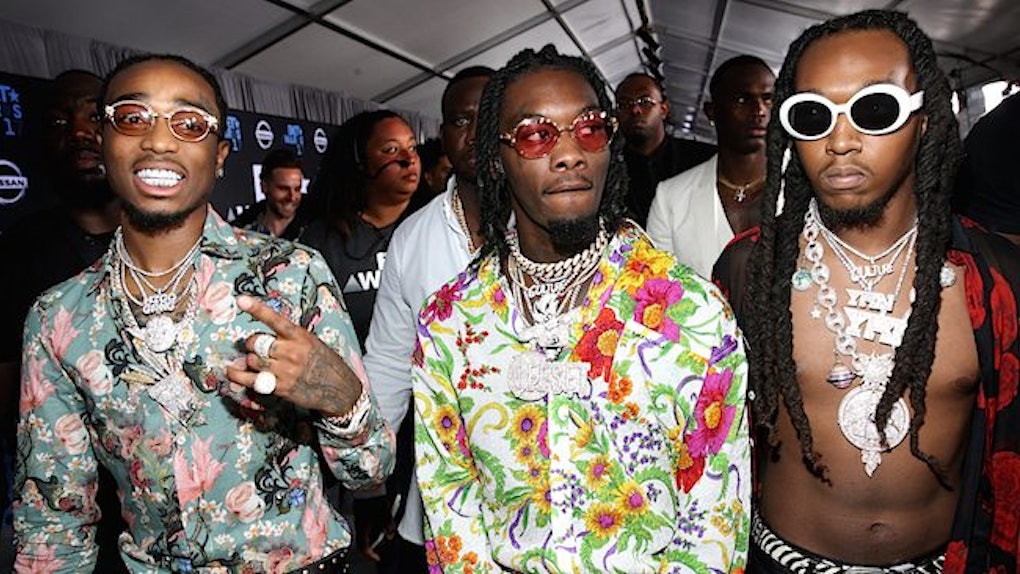 What Does Boujee Mean? Migos Made The Word So Popular

Migos’ single "Bad and Boujee," off their 2017 album Culture, was a massive hit. The track went viral on social media and on the radio, ultimately hitting No. 1 on the Billboard Hot 100 and snagging them super-prestigious accolades, including nominations for Best Hip-Hop Video at the 2017 MTV Video Music Awards and Best Rap Performance at the 2018 Grammys. "Bad and Boujee" was one of 2017’s most memorable songs, so it's no wonder the Migos track is still a fan-favorite, party-playlist go-to for fans to this day. But what does boujee mean? Here’s what you need to know.

The "Bad and Boujee" lyrics, “My b*tch is bad and boujee (bad) Cookin' up dope with a Uzi (blaow),” quickly became iconic. According to Urban Dictionary, in the context of the Migos song, "boujee" means, "High class, flossin', ballin'. One who possesses swag. Elite, rich."

But the word is also a stylized version of the already-popular slang word "bougie." When used colloquially, it often has more of a negative connotation and is used in reference to someone who is snobby and puts on airs, or who aspires to be of a higher class than they are.

Both words are an abbreviation of the word "bourgeois,” a French term established in the 18th century to describe the middle class who adhered to a materialistic life of luxury. Today’s closest equivalent might be upper-middle class people who spend a lot of time at country clubs.

But in “Bad and Boujee,” Migos puts a spin on the word and redefines it in a much more positive way, and that’s part of what made the song so popular.

In the music video, Migos and a group of women consistently contrast themselves by wearing expensive clothes and drinking champagne while eating ramen in a fast-food restaurant. They also eat out of Chanel-labeled fast-food containers. That contradictory symbolism is featured throughout the video, and paired with their chosen stylized spelling of "boujee," the video is basically about Migos defining their own type of luxury.

Bad, in this case, means good, and boujee doesn't necessarily mean rich people who frequent golf courses and live in lavish mansions or someone who’s aspiring to be something they’re not like the established definitions of the words imply. In “Bad and Boujee,” the word “boujee” is exactly what Migos want it to be: simplicity and luxury all in one.

Check out all the lyrics to the “Bad and Boujee” intro and chorus below. It paints a perfect picture of what Migos mean.

You know somethin', we ain't really never had no old money

We got a whole lotta new money though, hah

(If Young Metro don't trust you, I'm gon' shoot you)

Cookin' up dope in the crockpot (Pot)

We came from nothin' to somethin', n*gga (Hey)

I don't trust nobody, grip the trigger (Nobody)

Call up the gang and they come and get ya (Gang)

Cry me a river, give you a tissue (Hey)

My b*tch is bad and boujee (Bad)

Cookin' up dope with a Uzi (Blaow)

My n*ggas is savage, ruthless (Savage)

My b*tch is bad and boujee (Bad)

Cookin' up dope with a Uzi (Dope)

My n*ggas is savage, ruthless (Hey)

We got 30s and hundred-rounds too (Glah)

This article was originally published on Aug. 18, 2017