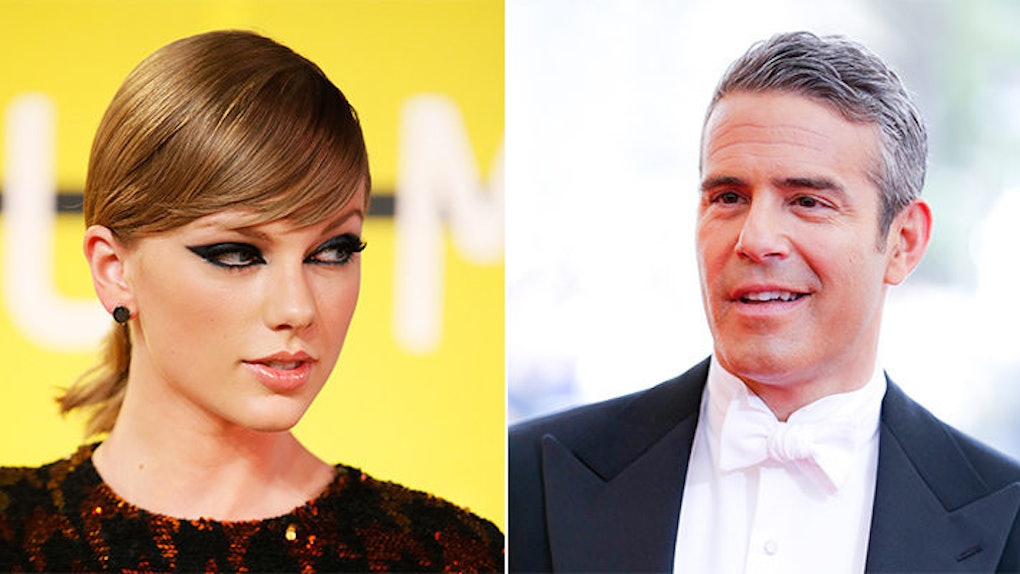 The advice above may have been the most useful words uttered in the history of Germanic language had they reached Andy Cohen's ears earlier.

The "Watch What Happens: Live" host ran into the "Bad Blood" singer at the after-party for the 2016 Met Gala and, in an innocent attempt to help the Grammy winner find an empty seat, promptly pissed all over his dreams of ever joining the Taylor Swift squad.

Why I felt I needed to get involved I will never know (maybe I was auditioning for her squad?), but I innocently said exactly the wrong thing to her, which was: 'Your friend Katy is sitting in the corner and there's plenty of room around her… She asked, 'Katy who?' and I said, 'Perry,' at which point she clearly let me know that she's the exact opposite of her friend.

Catching his slip-up immediately, Andy assumed a quick joke would smooth things over. He continued,

I kind of gasped, realizing she was in the most famous feud of all the feuds… I said at least now she knows where not to go, which I thought was a nice button on the conversation and made it all a laugh… She didn't agree… The capper is that she now thinks I'm a dick and I wasn't even trying to be shady. I was just sticking my nose where it didn't belong.

As Tay Tay walked away, she spun to face her new mortal enemy -- Andrew Joseph Cohen of the St. Louis Cohens -- “commanding [him] not to say a word about this on [his] show and said that she's watching." Cohen wrote,

She's watching? Is that a threat? And is she watching?

That made me feel good momentarily good until I realized there might've been a 'fucking' thrown in there before 'your show,' or was that my scared imagination? (If she's watching my 'fucking' show, that makes it a little less exciting.)… I sputtered that I had no plans to say a word about it on my show… She didn't threaten me about putting it in my book… so here we are.

You can watch Andy re-tell the story below.

Oh, Andy, you tricky betch. What if you've ruined your only chance to have Taylor on a future episode of “WWHL”???