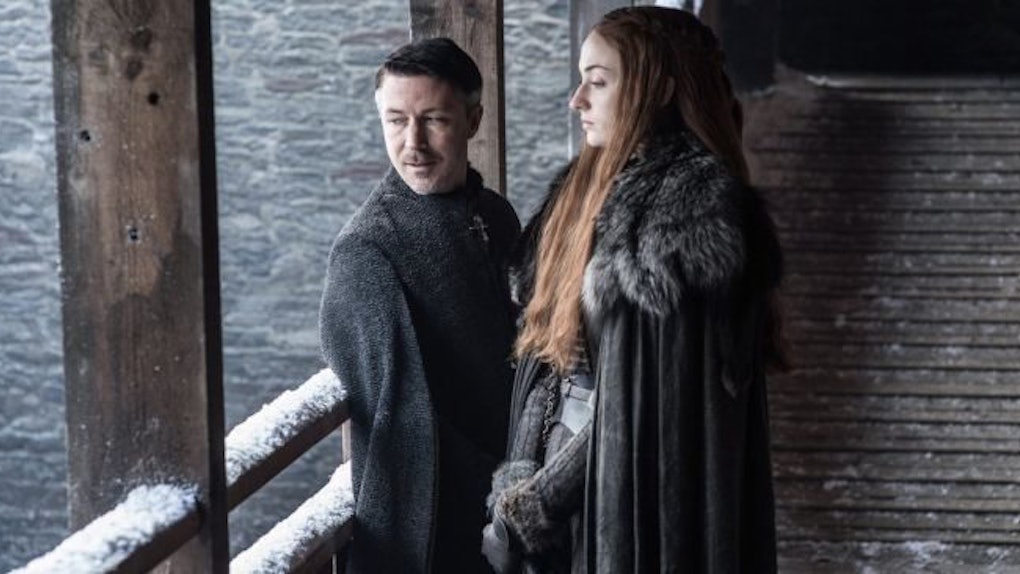 The lone wolf dies, but the pack survives. Sansa Stark — as eldest living Stark, now that we know about Aegon — is leading them. And Sansa is not here for all you Littlefinger stanners, so stand the f*ck down. Sophie Turner's tweets about Sansa Stark and Littlefinger are pure fire, and it's freaking amazing.

Turner dipped her toes into the perilous waters of the Game of Thrones fandom on Aug. 29 when she got involved in a Twitter discussion between two fans who (spoilers!) were arguing about the Season 7 finale of Game of Thrones — and particularly the scene where Sansa, as acting Lady of Winterfell, maneuvers Littlefinger into a confession of his crimes, publicly accuses him of murder and treason, and then, as he tries to stammer out a defense, has Arya cut his throat.

I cannot be an impartial reporter on this. That scene was awesome, and satisfying, and thoroughly, thoroughly deserved on Littlefinger's part, after he manipulated the whole of Westeros into decimating warfare with all his “chaos is a ladder" BS. (He also betrayed every Stark he ran into for seven seasons, which I think was probably more Sansa's point, but I digress.)

Turner, apparently, agrees. So when a fan started making noises about how Littlefinger's fate was undeserved, she jumped in with the receipts.

Side note, I wonder if it's embarrassing to be using the Twitter handle "SophieTurntits" and then actually have Sophie Turner jump into your thread?

Turner didn't stop there. She took down the fan's other arguments in Littlefinger's defense, too.

With, you know, all the plot points, details, and other things-that-actually-happened through the course of the series.

It's pretty awesome to see Turner standing up for her character, who has been something of a fan favorite-to-hate for years.

But through the course of this series, Sansa has survived so much that it's kind of unbelievable. She was a hostage of her family's enemies in King's Landing, she was the fiancée and punching bag of the most volatile sadist in Westeros, she was the hostage of an adult man with an unhealthy sexual obsession with her/her mother, and she was the wife and punching bag of the other most volatile sadist in Westeros.

Sansa has spent a lot of time surviving, and as she told Littlefinger — she learned from it.

Fans following the exchange were all about it, too.

I'm willing to bet if there was Twitter in Westeros, Sansa herself would be all about this, whatever mixed feelings she may have about executing Littlefinger.

The Queen In The North!