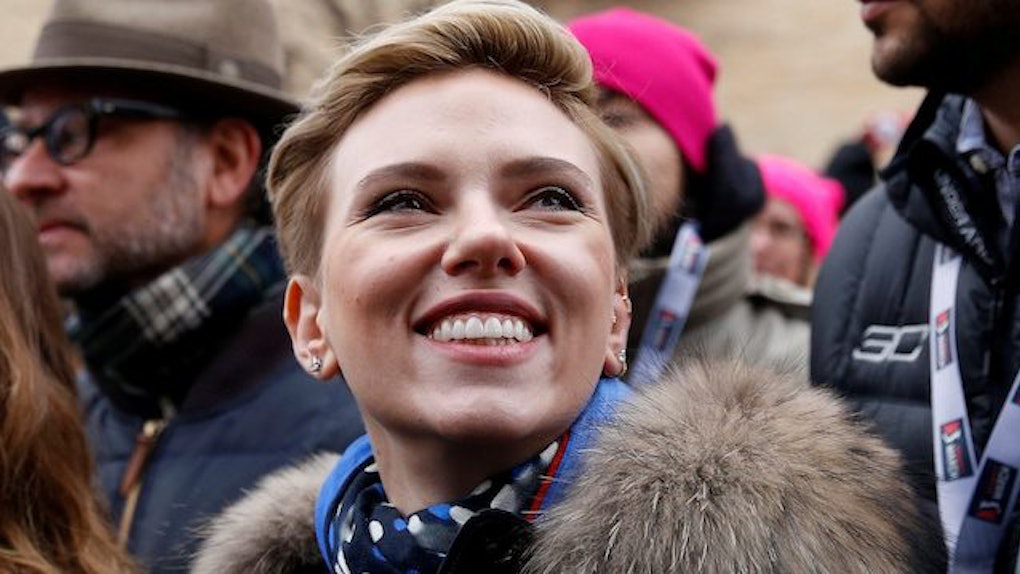 Scarlett Johansson Gets Real About Sexism In The Workplace

We all saw the statuses that popped up from the deepest, forgotten corners of our Facebook feeds after the national Women's March was over in January.

Women were sharing articles saying things like, "feminists are too 'out there,'" or, "feminists need to stop complaining and hating men."

And then there was my personal favorite, "Why are women marching for equality?! Last time I checked, we were equal!"

Now, I'm from Texas so I'm used to people from home posting statuses I don't agree with. But this stance on feminists and the Women's March genuinely blew my mind.

The word "feminism" is defined by believing in the equality of the sexes, but it seems people have very different views of what equality actually means.

Johansson was not only present at the Women's March on Washington, but she also decided to give a speech and share a bit of her own experience with Planned Parenthood.

Despite being completely absent from all social media platforms, the 32-year-old actress felt the need to speak out in support of an organization that helped her get health care when she was just 15 years old.

After receiving backlash for her speech (and of course, praise from others), Johansson told Marie Claire,

Maybe I'm being presumptuous, but I assumed it was obvious that women in all positions struggle for equality. It's always an uphill battle and fight.

Johansson is Marie Claire's March cover girl, and she embodied the feeling many women have had since the march.

Saying women are equal is a blanket statement thrown on top of a real issue with facts and figures to back it up.

According to the United States Department of Labor, there is a 21 percent pay gap between men and women. And this gap is even worse for women of color.

My experience with my close female friends and family is that the struggle is real for everybody. Everyone has been discriminated against or harassed. Sexism is real.

Although Johansson didn't mention the many available facts about gender pay disparity, she does speak to the truth many women in the workforce are well acquainted with.

You'd be hard-pressed to meet a woman in the workforce who hasn't experienced some form of harassment or gender bias when it comes to her paycheck or otherwise.

Johansson also talked about inequality she's faced in Hollywood, which is notorious for publicly paying men much more than it pays women.

Just because I'm the top-grossing actress of all time does not mean I'm the highest paid. I've had to fight for everything that I have. It's such a fickle and political industry.

As more women continue to speak out about the issue and their own experiences with pay gaps and sexism in the workplace, the stats will hopefully stretch even thinner.

In 1980 the pay gap sat at a 40 percent difference of what men made on average. And if you ask me, given that it's been 30 years, it's just not shrinking fast enough.