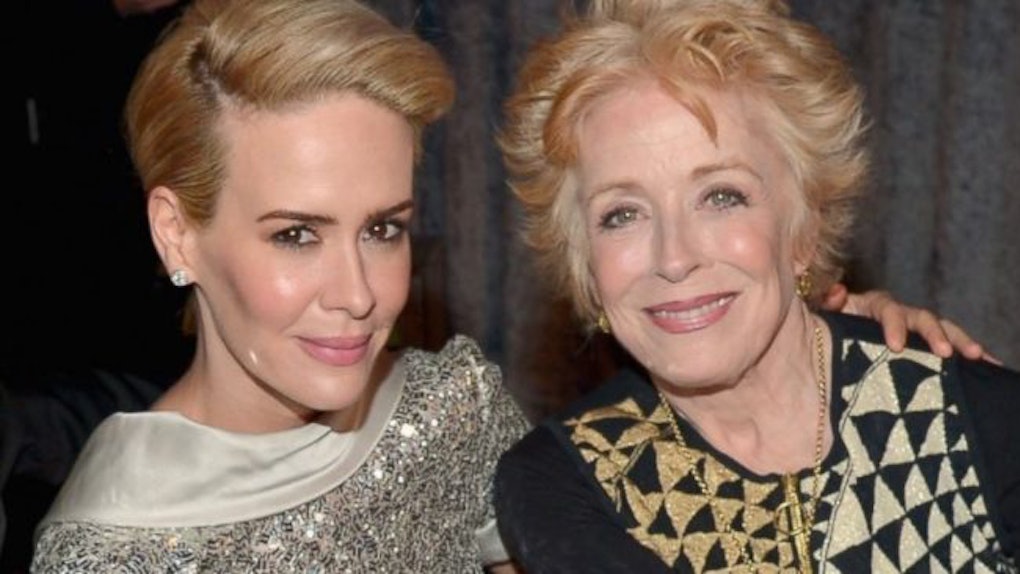 How Long Have Sarah Paulson & Holland Taylor Been Dating? It's Been A While

If there is one thing the Emmys are good for (aside from, ya know, honoring the year's most outstanding work in television), it's kicking off awards season as one of the most anticipated red carpet events of the fall, and, if there's one thing red carpets are good for, it's reminding us peasants watching at home that we're poor AF reminding us which celebs are currently dating. With that in mind, it's been a hard year for us, what with losing Chris Pratt and Anna Farris and all, but we can still rejoice over the fact that Sarah Paulson and Holland Taylor are dating and are more in love than ever.

Paulson and Taylor have been Hollywood's most surprising and inspiring relationship for a few years now. The adorable couple went public for the first time with their romance in December of 2015, but reports have suggested that they were dating for at least six months by that time. A few days prior to the couple publicizing their relationship, Taylor spoke about her relationship with a woman during a radio interview with WNYC. She didn't openly name Paulson as her partner in the interview, but she did say,

There's a very big age difference between us, which I'm sure shocks a lot of people, and it startles me. But you know, it's not a statement original to me — I've heard it as a joke once in my past, but as they say, 'If she dies, she dies.' . . . She thought it was funny when I said it, too.

Yes, there is a big age gap between the two — the American Horror Story actress is 42, meanwhile the Legally Blonde actress is 74 — but that obviously hasn't hindered their relationship, which is now going on two strong years. In fact, breaking the mold so boldly seems to be working for them. According to Taylor, the idea of marriage has come up between the girlfriends. She spoke on how, given her generation, marriage is not something that automatically occurred to her when she began dating Paulson, but Sarah, on the other hand,

But it's been a very casual conversation at this point, but it's not — it would be a very private thing. I would not do that publicly. But as a symbol, as a pledge, as a plighting one's troth I would see it — that it would be a wonderful thing to do.

Married or not, these two are a picture perfect couple, and they love to gush over each other from time to time. In fact, back in 2015, before any of us plebeians knew Sarah and Holland were an item, Holland tweeted a picture of her girlfriend looking stunning (seriously, Sarah Paulson, teach us how???) in a bronze and gold dress with the caption "When captions fail...", which should have been signal enough for us to pick up on their romance.

Obviously you can tell how enamored Holland is by Sarah, and Sarah clearly feels the same way. The AHS actress spoke with the New York Times last year about her relationship with Taylor, whom she called "probably the most exquisitely beautiful woman [she'd] ever seen," her past relationships with men and women, and her choice not to label herself as either "gay" or "straight"; she said,

If my life choices had to be predicated based on what was expected of me from a community on either side, that's going to make me feel really straitjacketed, and I don't want to feel that. What I can say absolutely is that I am in love, and that person happens to be Holland Taylor.

All in all, it seems like we couldn't ask for a more perfect couple in 2017. Sarah and Holland clearly love each other, and they obviously love defying stereotypes and dismantling the norms of dating. I for one can't wait to see them together on this year's red carpets.