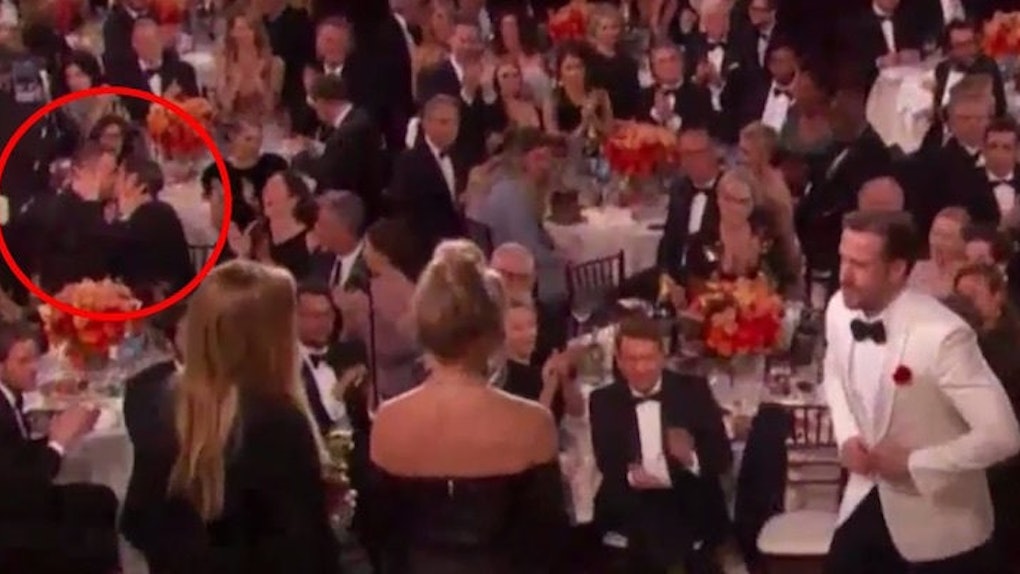 Ryan Reynolds And Andrew Garfield Kiss At The Golden Globes

Hi, hello, good evening, would you like to see a video of Ryan Reynolds and Andrew Garfield kissing passionately?

Of course you would. You're human, aren't you?

Here you go, ya filthy animals:

What's that? Again, you say? Well, if you insist!

You want it in a cropped, GIF form? Very well, very well.

You want it as a still photograph that you can just gaze at and project all kinds of nasty assumptions onto? Of course!

Now you want it from far away, so you can pick the kiss out of the crowd like some kind of makeout detective? Okie-doke!

Best "Where's Waldo" ever, am I right?

OK, OK, for those of you who want just a little bit of context, this all went down at the 2017 Golden Globes.

Ryan Gosling had just won Best Actor in a Musical or Comedy film for "La La Land," a category Ryan Reynolds was nominated in for "Deadpool."

While Ryan took the stage, other Ryan and Andrew, who was nominated for Best Actor in a Drama for "Hacksaw Ridge," just... went for it.

Now, if you are merely a casual fan of Marvel films, you just see two hot, charming men smashing their mouths together.

Not that that's not amazing, but I'm here to tell you, to fans of the "Deadpool" and "Spider-Man" comics, this kiss means so much more.

To make a long story short, a lot of people ship Deadpool and Spider-Man together. Like, a lot.

So much so that they even made a new comic series about it, just to please those fans, called "Spideypool."

Cleary, Ryan and Andrew are well aware of this.

So, in conclusion, SpideyPool is real, nothing hurts, and I'm gonna need Marvel Studios to sort their shit out so we can get that kiss to happen on the big screen ASAP.