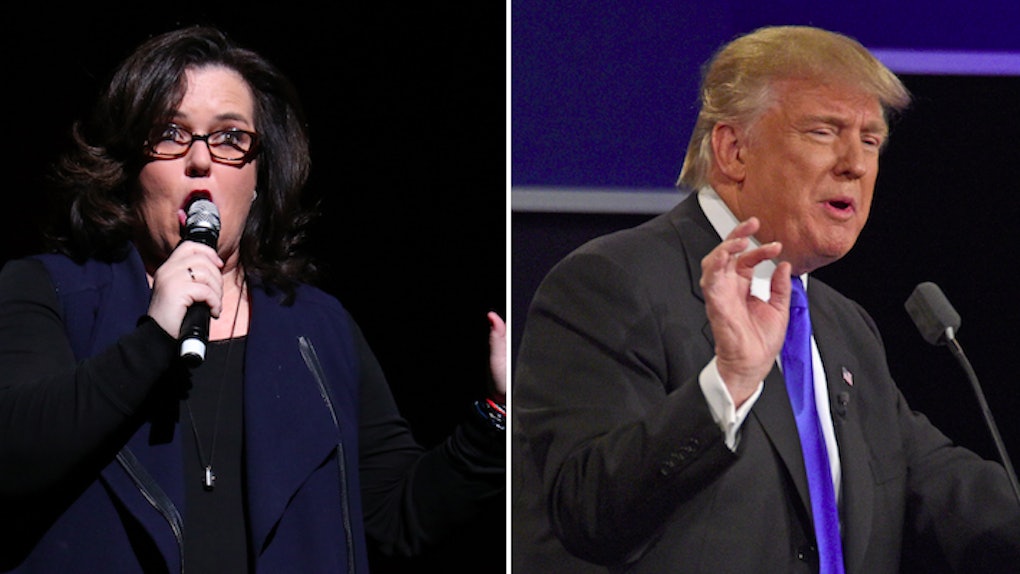 Rosie O'Donnell flung more than just Kooshes back at Donald Trump in this recent exchange of words, which is a little depressing, because I really miss those things. #BRINGBACKTHEKOOSH

In case you live in a cave and didn't watch the first presidential debate, let me fill you in. No, you know what? What are you doing with your life when the Taliban can find time to watch Hillary and Trump debate but you can't?

But I digress. Donald Trump responded to Democratic presidential nominee Hillary Clinton's accusations of misogyny, which included some of his remarks he specifically made toward Rosie, by saying,

Rosie O'Donnell, I said very tough things to her, and I think everybody would agree that she deserves it and nobody feels sorry for her.

"Everyone would agree that she deserves it?" Whoa, Donald... I'm going to build a wall around that ridiculous claim and make you foot the bill (if you can actually afford to pay it -- release those tax returns!).

Needless to say, Rosie was not exactly riveted by these remarks.

The 54-year-old took to Twitter to understandably vent about Trump's justification of bullying her repeatedly.

It's fitting that Rosie suggests Trump hold his nose in this tweet, because during the first 20 minutes of the debate, Trump sniffed... like, a lot.

Unlike Trump, Rosie says she can actually substantiate her claim that she opposed the Iraq war.

If you needed a refresher, Rosie posted the segment on "The View" that started their feud back in 2006.

Of course, you come at Rosie, you're going to get a piece of Madonna's mind.

Rosie finished her epic takedown of Trump on Twitter by sending out some love to her supporters.

Well done, Rosie. Despite Donald's continuing denial to own up to the things he's said in the past or to apologize for his previous insults or to, you know, apologize for anything at any point, it's nice to see someone stand up to him so proudly.