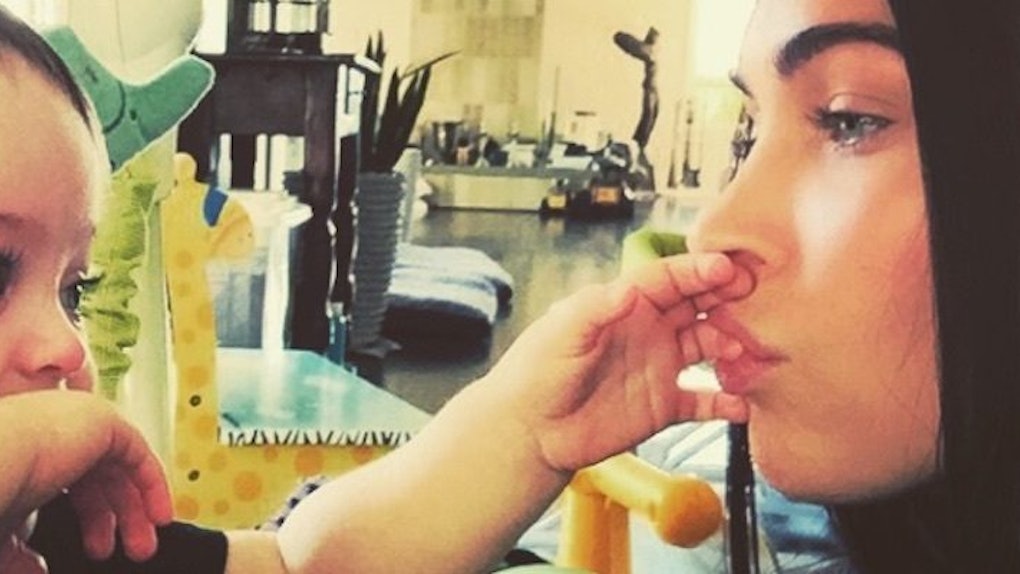 Remember earlier this year when Megan Fox was taking real estate advice from her unborn child? Yeah, you do.

During a visit to “Jimmy Kimmel Live!” In June, the then-pregnant actress told the host her baby had been sending her messages to make a big-time purchase.

You don't hear an audible voice, but I feel like you receive messages from the child if you're open to it… For instance, this baby wanted me to live somewhere else, so we're moving to a whole different place in Los Angeles because I feel like that's where this baby wants to be raised.

Since that appearance, Megan has safely delivered healthy baby boy Journey, who is shockingly nothing like Annette Bening's character in “American Beauty.” Yet.

Journey has officially joined the family, and dad Brian Austin Green is losing it over how adorable his newborn son truly is.

In fact, he's losing it for all his kids.

He posted a photo of the couple's eldest son, Noah, on Instagram on Wednesday, marveling at “how good looking he is.”

He also showed middle child Bodhi some fatherly love, sharing a pic of the 2-year-old trying out a new look.

Before Journey was born, Megan admitted to ET while Bodhi wasn't too phased by the concept of a younger sibling, Noah was amped enough for the both of them.

The older one is excited. Bodhi is too young… He gets it, but he's still in that sort of oblivious phase, like, 'What are we playing right now?' He's not thinking about the future. But Noah's really excited. He's actually really maternal, and he can't wait to feed and hold and pet the baby.

Luckily for Noah, the time has come to bond with his new sibling and teach Bodhi the joys of being a big brother. After he's done with his wigs, obviously.