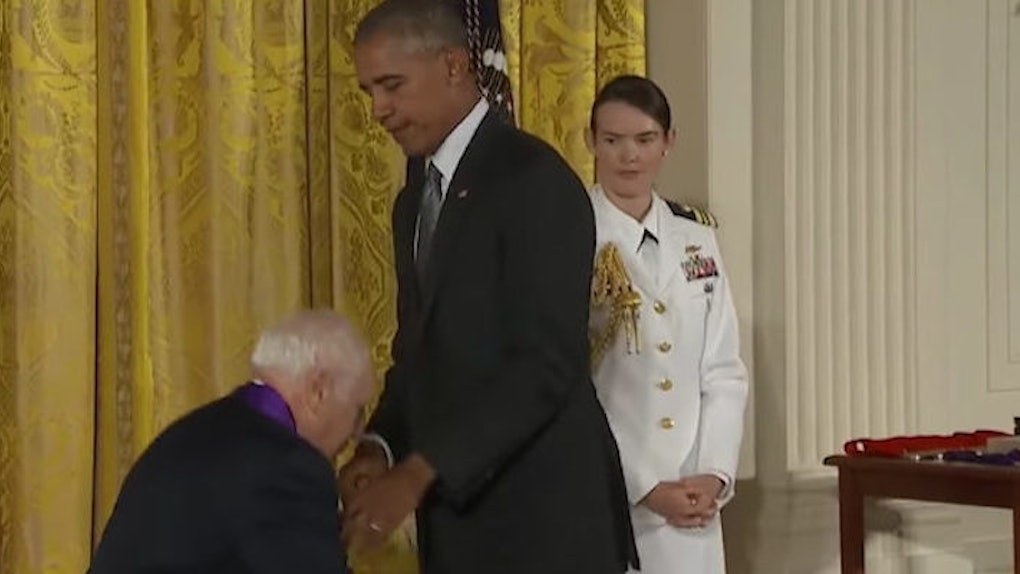 "Alpha, this is Omega. I have eyes on Eagle! An old man is trying to take off his pa-... oh, wait never mind. That's only Mel Brooks. Looks like he's doing a bit, sir. Yes, POTUS is safe, over."

This is how I imagine the Secret Service might have dealt with the fact that a 90-year-old comedian almost removed the pants of the most powerful man in the world.

No word yet on what DEFCON level we're currently at as a result.

While receiving the 2015 National Medal of Arts on Thursday, living comedic legend Mel Brooks performed some serious shtik to lighten the gravity of the situation.

How'd he do that? By trying to lighten the gravity of the Commander in Chief's trousers.

Not only that, but Mel was so smooth, he really could have gotten away with it. Like, Obama didn't even notice at first, but when he did he was all smiles.

I think the only person more surprised than I was about the ballsiness of this move was this official who gave President Obama the medal to bestow upon Mr. Brooks.

"UH WHAT IS HE DOING DOWN THERE?"

But seriously, this is classic Mel.

"Oh, were you taking this prestigious award seriously? Well, I'm going to make the leader of the free world drop trow. HOW DO YOU LIKE THAT?"

When it comes to this prestigious award, I can only imagine that Mel has two words to say: "Thanks, Obama."

However, on behalf of the entire US of A, thank you, Mel Brooks. You've inspired many generations of comedians to find new, groundbreaking ways to make people laugh.

Even if one of those ways is just trying to make someone a Commander in Briefs.