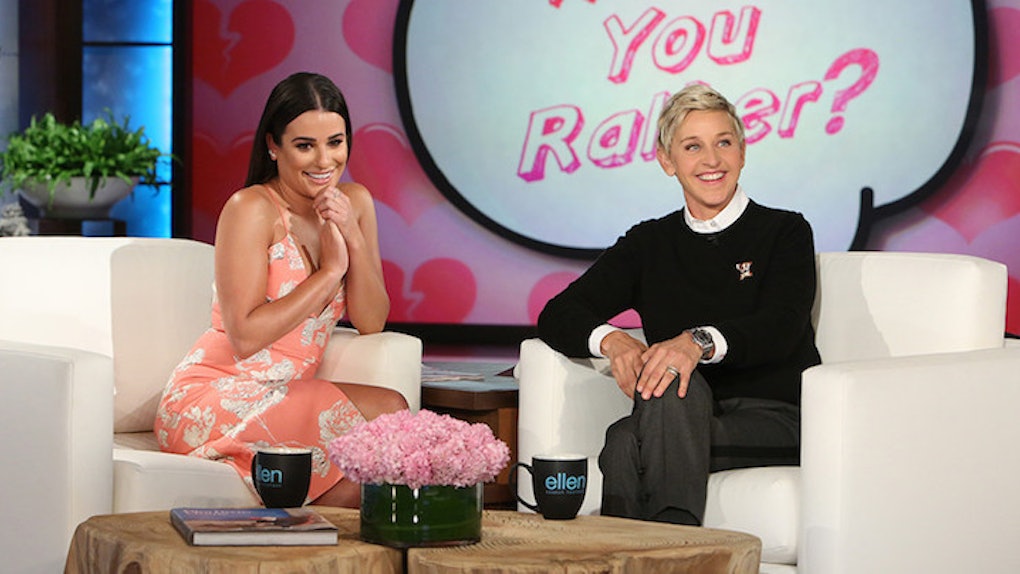 Two things you should know about Lea Michele: 1) She is totally cool being naked whenevs, and 2) she has one massive crush on Michael B. Jordan.

The former "Glee"-er made a stop by "The Ellen DeGeneres Show" to promote this season of "Scream Queens."

While there, Ellen decided to help Lea Michele pick out a new boyfriend as Lea is currently a miserable single wreck. (JK, she's doing fine, everybody. LEA MICHELLE DON'T NEED NO MAN!)

Here is a basic rundown of Lea Michele's "Would You Rather" flowchart:

It's cool, I didn't want to be included on this list anyway. Whatever.

There was an obvious theme to this list with most of the names mentioned being dudes who were linked to Taylor Swift at one point.

When asked about Tom Hiddleston, Michele got candid about how he just broke up with Taylor so it may not be the best time to be linked to "The Night Manager" star, saying,

He's got too much going on, Tom Hiddleston. I can't get with that. I can't, it's a lot.

It wasn't all relationship talk during her time on the show, though. She and Ellen also had to discuss how she bared it all for her recent Women's Health magazine cover.

When asked where she got the courage for the shoot, Michele said,

I just turned 30, so I figured, 'Why not?' I feel in pretty good shape, and it was very interesting, though, just walking around naked, going, 'I'm ready!'... I mean, I definitely am comfortable. I was on Broadway for a while and I had to do some nudity stuff for 'Spring Awakening,' so I'm pretty comfortable being naked... I feel everyone [at the photo shoot] was more nervous than I was.