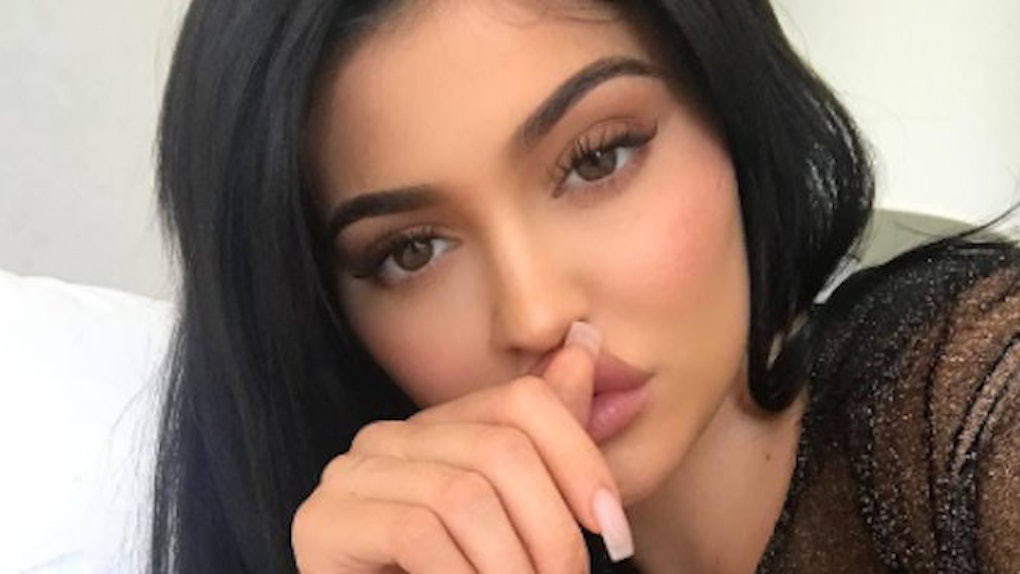 Why Did Kylie Jenner Get Lip Injections? The Star Was Made Fun Of

You guys know Kylie is my girl. In all of my years of Kardashian research, I've developed a long-winded, heavily-theorized thesis on the how, what, and whys of the youngest sister's life. It covers everything from what I think it takes to survive being Kim's sister to owning your own house at 18 years old. Still, one question that looms ever so heavily over all of us is, why did Kylie Jenner get lip injections, ultimately? To which I respond: I mean, oof... why wouldn't she?

Here's what I mean: Being raised on television since the age of 9 in arguably the most famous family of all time has gotta mess with your mind and sense of reality. Watching her sisters soar to various extremes of success that often stem directly out of their famous physical appearances would obviously make anyone think, "Hmm... maybe it really does matter how I look."

Jenner's older sisters are notorious for their plump features, including doe eyes, round bums and puffy, pouty, lips. Jenner openly and often admitted in the Keeping Up With The Kardashian Series that she was always insecure about her lips as a young teenager.

Then, one day and seemingly over night, she appeared with a new pout that we would all be talking about for years to come.

In the beginning, it was like a phenomenon. Jenner denied (or avoided) admitting to any form of enhancers or lip injections, and instead introduced the world to the concept of over-lining her lips, i.e. drawing a fake, extended border around her natural lip line and filling it in with lipstick.

Still, she knew she could only avoid the conversation for so long, and eventually admitted on a KUWTK episode that she received temporary lip injections.

In one famous scene, older sister Kim gave some sisterly advice to Kylie on her transformation.

I've always told Kylie we all have our own insecurities and there's nothing to be ashamed of, it's just handling it the right way. ...If someone asks you about your lips, just be honest, just tell them, it's really not that big of a deal.

Kylie admitted in the same episode,

We have all eyes on us all the time, so, especially for me at my age trying to find myself... it's hard to not let it affect you.

Now, in her own series Life of Kylie, Jenner let us in even further on her decision to plump up.

In the Sept. 10 episode, Jenner explains in a therapy session that when she was just 15 years old a boy she had a crush on told her her lips were small after kissing her. Great. JUST GREAT, GUY.

I was 15 and I was insecure about my lips. I have really small lips. And it was like one of my first kisses and a guy was like, 'I didn't think you would be a good kisser because you have such small lips.' But I took that really hard. Just when a guy you like says that, I don't know, it just really affected me. I just didn't feel desirable or pretty. I really wanted bigger lips.

Preach. I get it. We relate. We understand. We are here for you and you look amazing and it is your body and you do what you want!

It must be a confusing line to walk in her position, wanting to promote self-love and beauty while still defending the decision to take control over your insecurities and feel empowered to change what you don't like.

More than anything, Kylie, we respect your choices to do whatever you want.