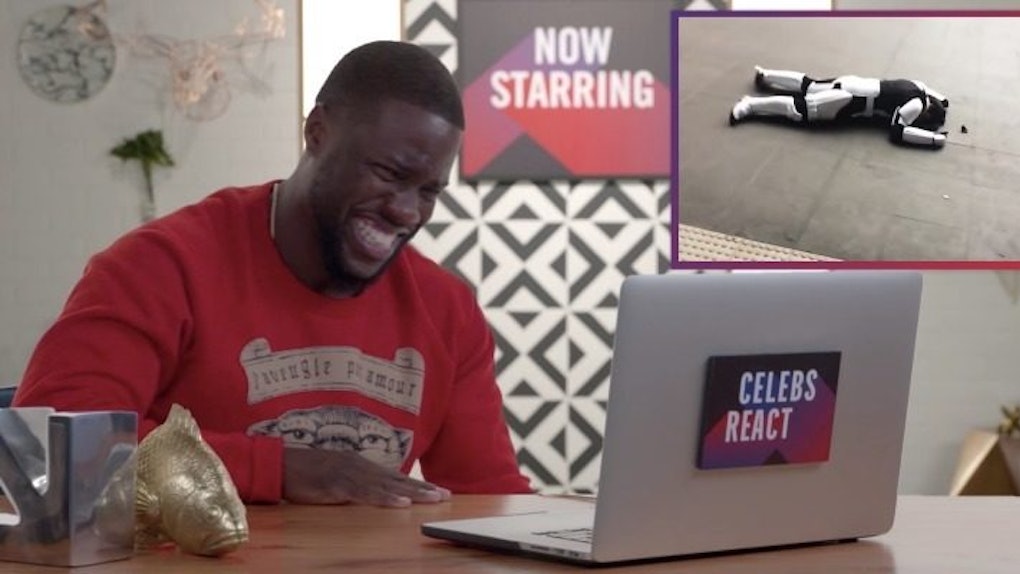 Have you heard about the new series "Celebs React" from Fullscreen?

As you might've guessed from the title, this is an entertainment series that features your favorite celebrities reacting to some pretty awesome, hilarious shit.

I don't know about you, but I spent Monday night watching "Star Wars: Episode VI - Return of the Jedi" on TBS. My girlfriend was less than pleased, but it was epic, man.

Anyway, I bring up my sad Monday night because the first episode of "Celebs React" has stars reacting to hilarious "Star Wars" videos.

As you can see in the video above, it's really funny to watch a Stormtrooper fall down a flight of stairs, and that humor is not exclusive to just normal folks.

Kevin Hart and Mark Cuban love that shit, too.

You make us laugh all the time, Kev, you deserve to chuckle at someone else's pain.

According to Mashable, "Celebs React" is the brainchild of Benny and Rafi Fine, who have been creating this kind of viral content since before YouTube was even a thing.

I know... that's like, a really, really long time ago.

Apparently, Fine Brothers Entertainment boasts over 20 million YouTube subscribers and their videos garner about 150 million monthly views. Judging from this first episode of "Celebs React," it's not hard to see why.

It's awesome to watch our favorite celebrities star in their own pieces, but it's oddly entertaining to watch them be just like us and react to funny stuff just like everyone else.

Though it may not seem so at times, celebs are people, too.

In case you're wondering, a new "Celebs React" video will reportedly be released every Tuesday, from November 1 until December 20.