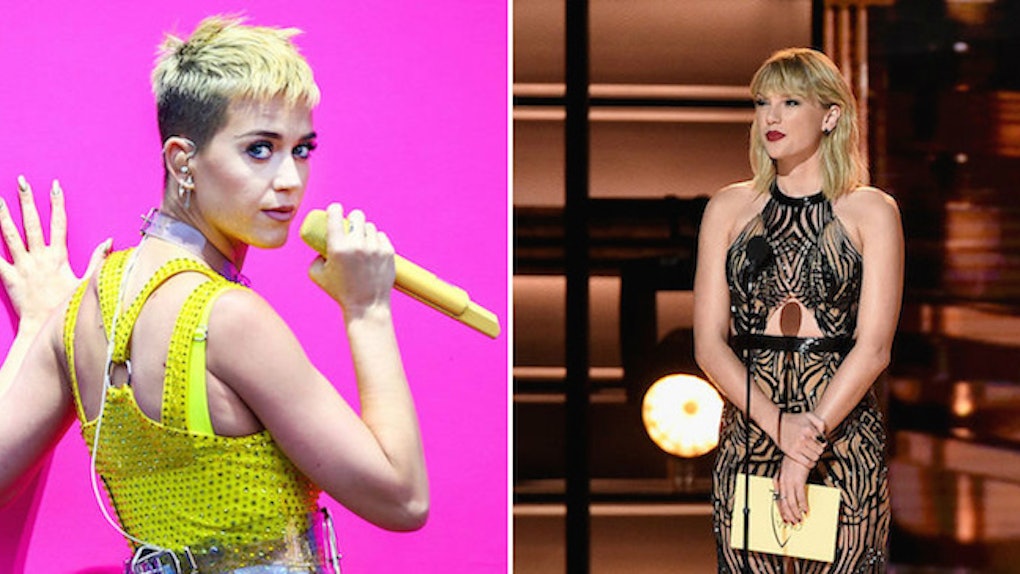 Will Katy Perry & Taylor Swift Reunite At The VMAs? Fans Have A Theory

The full list of MTV VMAs nominations was announced Tuesday, July 25, and Kendrick Lamar, Katy Perry, and The Weeknd are nominated in the most categories. There are also rumors that Katy Perry will be hosting the VMAs, but there's no confirmation on that front.

Fans have also developed an insane theory that Katy Perry and Taylor Swift will reunite at the 2017 VMAs. They think if Perry was hosting the show, that would be the perfect platform for her and Swift to come together and publicly put an end to their years of fighting.

Even though Swift hasn't released any new music other than her single "I Don't Wanna Live Forever" with Zayn Malik (which is nominated for Best Collaboration), fans think it's possible Swift will be awarded the Video Vanguard Award at the 2017 VMAs. The award went to Rihanna last year, Kanye West in 2015, Beyoncé in 2014, and Justin Timberlake in 2013.

If Swift gets the Video Vanguard Award, she'll obviously be making a big appearance at the VMAs. And if Katy Perry is hosting the VMAs, that means Perry and Swift will essentially be the stars of the show that night.

So this fan theory might actually hold some weight. Perry and Swift like to do things big, and the VMAs is one of the biggest award shows of the year. Swift also took the stage with Nicki Minaj at the VMAs a couple years back to show there was no more beef between them after a summer of fighting, so she's no stranger to making public showings of unity at award shows.

Swift and Perry reuniting in such a public manner to squash their five years of beef would definitely be a sight to see, especially since Perry has been saying she wants to end all of the fighting with Swift for months now.

In the meantime, I will still be petitioning for Lin-Manuel Miranda to host. YOU KNOW IT WOULD BE GREAT.