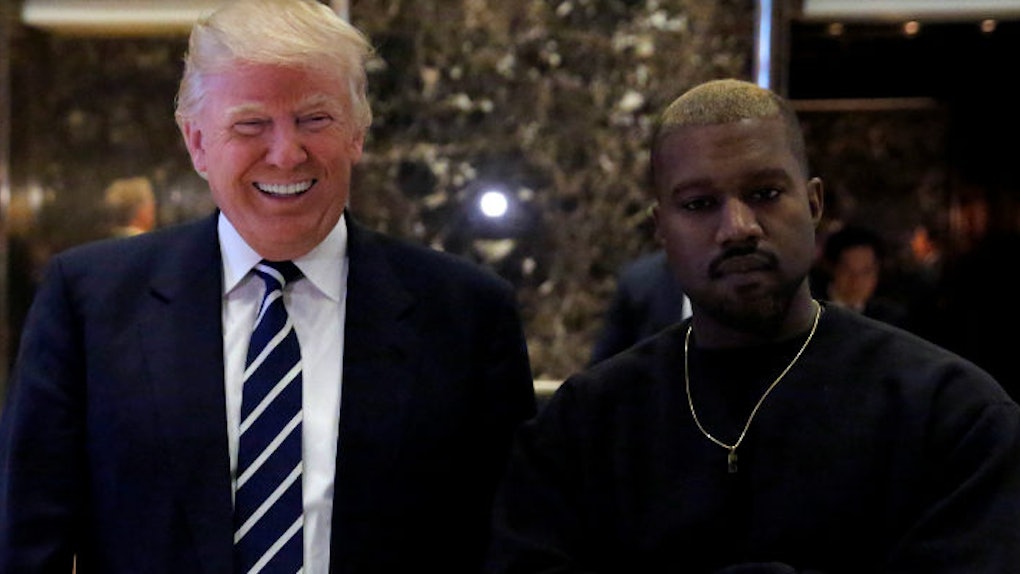 Here’s The Convo Kanye West And Trump Probably Had

But how did the conversation at Trump Tower really go down?

Something tells me it went a little something like this:

Kanye West: Thanks. I had no idea, Donald.

Donald: Yeah, 'yuge fan. Going to change the National Anthem to "Watch the Throne." More fitting, really. When Putin comes over for Thanksgiving, I want him to say, "Wow, how commanding. The best. I love that guy."

Kanye: Wow, that's quite an honor.

Donald: Vlad likes you too. Even though he's not a fan of The West.

Kanye: Look, I wanted to talk-

Donald: Thank you, by the way.

Kanye: Uh, for saying I would have voted for you? No prob-

Donald: For the hair.

Donald: Your hair. You've obviously changed your hair blonde to match mine. Love it. Melania loves it. She even whispers your name during sleep, you know, in between the crying. Billy Bush, who is hiding in my safe house, also loves it.

Kanye: Uh, the hair change is really not because of your-

Donald: Yeezus... can I call you Yeezus?

Donald: Look, Jesus with a Y (sorry, that's how I remember it mnemonically), as president, I'm going to be the best-

Kanye: Best. Of all time.

Donald: Careful. After Inauguration Day, I could have you locked up for that.

Donald: I'm kidding... I will have Russia hack into your laptop though. Don't want Taylor to get ahold of that. Probably have a recording of something scandalous like me, right?

Donald: Ray J? Is that short for Rudy Giuliani? Because I have that, too.

Donald: Can I get free Yeezys?

Kanye: Sure, what size are you?

Kanye: Sorry, I didn't catch that.

Kanye: You're a men's size three?

*someone knocks on the door*

Donald: No, I told him not to-

Kanye: What the hell is he-?

Donald: I can explain.

Vladimir: Do you vant to vin all the Grammys?

Vladimir: I can rig Grammys. Make you President of Grammys. J'yes?

Vladimir: I can make you President of Syria. Just please add me to "Famous" song. Please.

Donald: Too bad. Here take this as a sign of good will.

Vladimir: Do you vant to-?