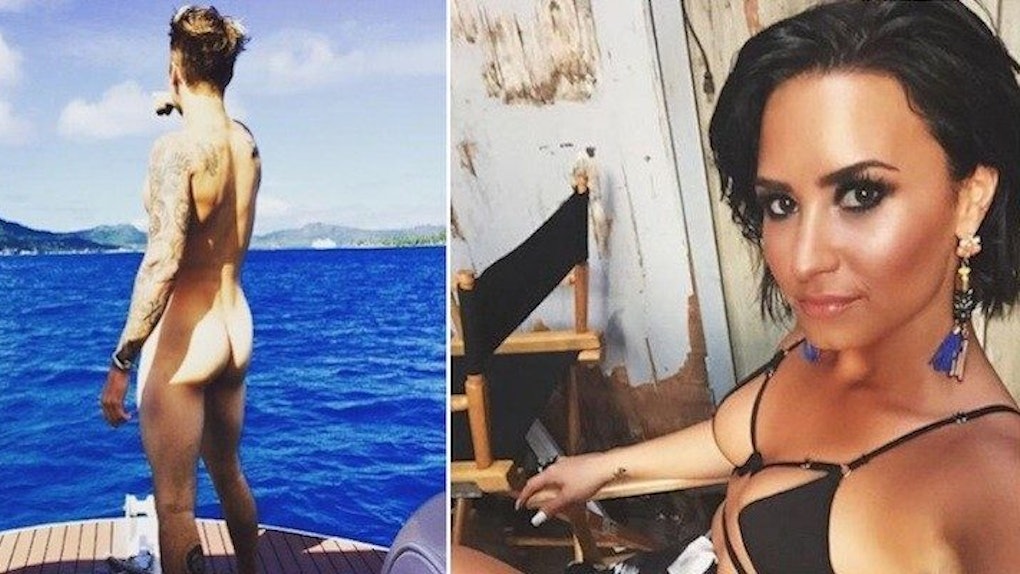 When Justin Bieber posted a picture of his white ass to Instagram, he probably knew it would break the Internet, so to speak.

But, it's unlikely he predicted what else the photo would do: highlight the impossible double standards women face every day.

Bieber's butt pic soon accumulated two million likes, and of the 600,000-plus comments, a vast majority are from fans expressing their love and/or excitement for the singer's naked body.

When women do the same thing, they're often called names or even censored by the media platform itself (as Chelsea Handler famously was multiple times after posting photographs where her nipples showed).

To highlight this disparity, Tumblr user moanhowell took a screenshot of the comments on Bieber's post and compared it with comments on a photo recently posted by Demi Lovato where she's wearing a bikini top and what appear to be board shorts.

Moanhowell also showed how Bryana Holly was shamed for posting this photo of herself on Instagram.

The posts inspired others to share similar examples of double standards in the media, citing both actual events and hypothetical situations.

So Rihanna got her Instagram got deleted for a promiscuous photo but Justin Bieber is allowed to be freely naked? #doublestandards — simon (@ItsSimonVU) July 7, 2015

While we already know women in the media are held to impossible standards, seeing how violently the responses to male and female nudity clash is more than a little jarring.

Now that we have an audience lets talk about double standards shall we? Why praise Justin Bieber but hiss at Kim Kardashian?! — your majesty. ⚡️ (@Nadia20) July 7, 2015

Fortunately, ladies know how to take a stand...

lmao wow if taylor swift showed her butt to the world she'd be a "slut." but if justin bieber does it, its "hot and sexy" #doublestandards — nina loves luke (@otratIrh) July 7, 2015

...and the growing interest in gender equality and women's rights issues means our voices will only continue to get louder.

So it's okay for Justin Bieber to post a nude photo. Yet god forbid a female should ever do something like that. I hate double standards. — ❤️ (@theonewithelly) July 7, 2015