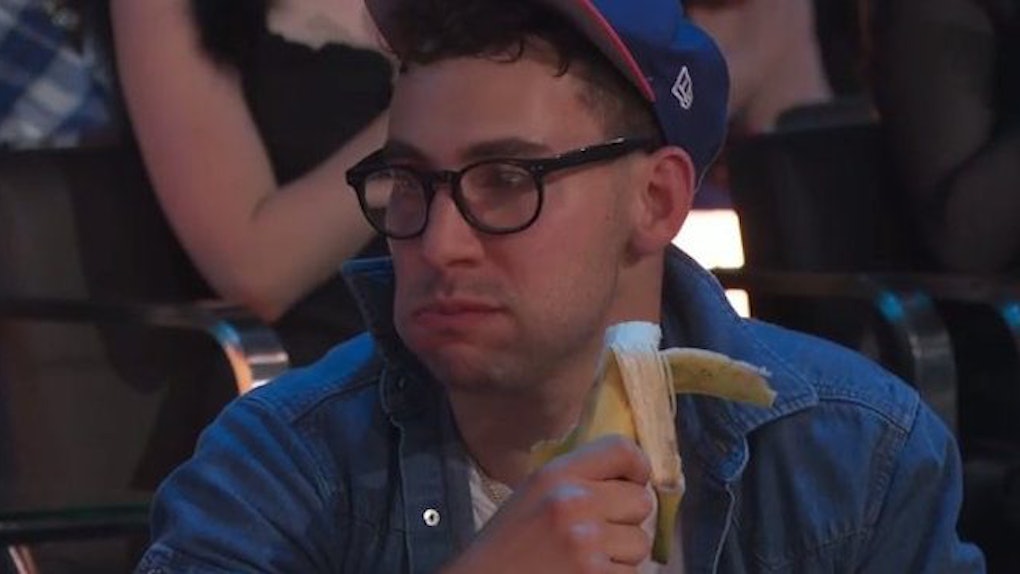 You guys, sometimes, during award shows, the only thing going through my head the entire time is a constant stream of "WTF?" And sometimes, I feel alone in that respect. But other times, Katy Perry wears a literal iridescent space suit on stage during her intro for the 2017 VMAs, my "WTF" stream of consciousness starts, and then, I happily realize I'm not alone. Enter: Jack Antonoff, the lead singer of Bleachers. Jack Antonoff eating a banana at the VMAs during Katy Perry's speech is quite possibly the perfect representation of me during awkward award shows 24/7.

It goes without saying that everyone was certainly anticipating some sort of crazy intro from Katy Perry at this year's VMAs, and what we got was certainly... interesting, to say the least. I mean, she came out on stage in a weird space suit, and she spent a lot of time trying to be sarcastic about the state of the world right now. She brought out a rack of clothes as if she were about to change into a new outfit and picked out a red handmaid's outfit (you know, like the ones from The Handmaid's Tale). Blessed be the fruit, I guess, Katy? Anyway, Jack Antonoff's face eating this banana during that whole debacle is pretty much the most relatable reaction I've seen yet:

Jack didn't even stop at a banana, for f*ck's sake. YOU GUYS, HE LITERALLY FACETIMED LENA DUNHAM WHILE EATING A SANDWICH DURING THE VMAs. I 100 percent aspire to Jack's level of IDGAF about award shows.

Yeah, unfortunately for Katy, Jack wasn't the only one whose reaction to her VMAs intro was a little less than enthusiastic. Twitter didn't really seem into the whole bit either, and most people thought it fell short on the funny factor.

I will say, Katy does have a point that the world right now is pretty freaking confusing, so maybe her entire intro was just a complicated metaphor for the confusing state of society? IDK, you guys, I'm just trying to make sense of things here.

Regardless, the night is still young, and Katy still has time to turn this hosting gig around. I believe in you, Katy! Just make sure Jack Antonoff doesn't have any more bananas.