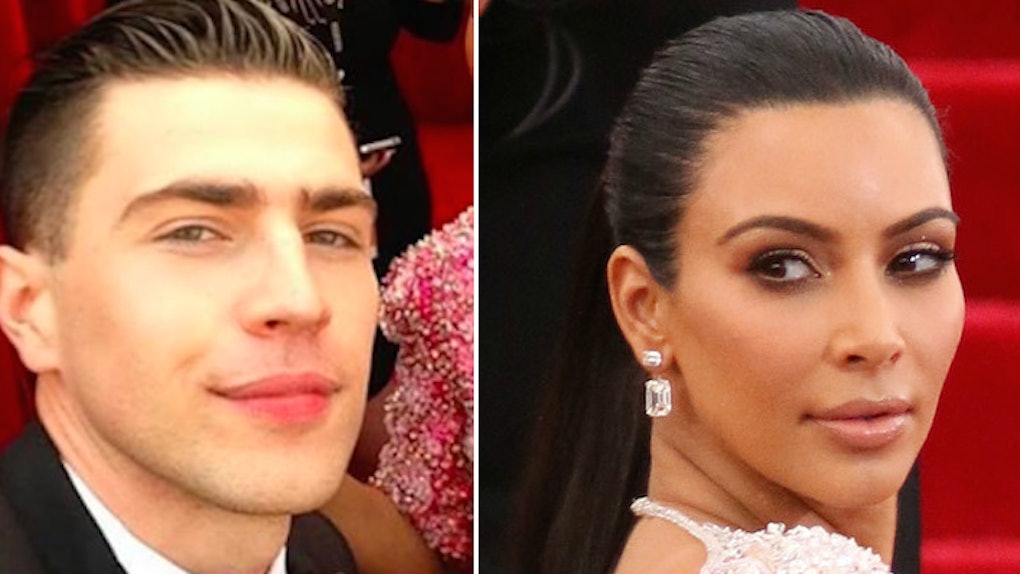 A week after the Ukranian prankster* grabbed Gigi Hadid and hoisted her off the street as she left the Max Mara show in Milan, Sediuk was nabbed by a bodyguard in Paris while crouching to kiss Kim Kardashian West's butt.

Now, he claims his actions were for the greater good. The 27-year-old former reporter wrote in a post on Instagram his decision to kiss Kimmy's rear came from a need “to popularize natural beauty among teenage girls” by "protesting Kim for using fake butt implants."

Wow. Well, praise whatever thumbless god created this unfunny version of Sacha Baron Cohen no one asked for because he's changing teen lives.

One day, these teenage girls are going to be confident, healthy, grown women. When that day comes, you can bet Sediuk is going to grab them in the street like an old sandwich.

He also claimed it was a complete coincidence he was outside L'Avenue on Wednesday as Kim was entering, swearing he "didn't know she was going to be there."

For the past two years, Sediuk has not worked as a legitimate reporter, but he's used his time off to evolve as a social commentator. LOL, JK. He's doing the same basic, entitled shit that got him fired from his job at Ukranian TV station 1+1 back in 2014.

Despite being terminated for his antics, Sediuk still considers himself an authority on professional, unbiased journalism.

In an Instagram post Thursday morning, he criticized media outlets like Paper Magazine and Vogue for taking sides and calling him a "scumbag" in reports. Sediuk cursed the "unprofessional" nature of subjective reporting and carved out some extra space at the bottom of his rant to suggest his latest victim was largely unaffected by his conduct.

He called Kim "a woman who was so 'scared' after the prank, that she rushed to the hotel to post yet another nude selfie."

Scared or not, if Kim knew Sediuk — a cisgendered, adult man who's keenly tuned into the fraught existences of teenage women -- tried to put his lips on her butt for the benefit of little girls like her daughter, North, perhaps she won't press charges.

*Ryan Atwood is a prankster. Peter Funt was a prankster. From 2003 to 2007, Ashton Kutcher was the Prime Minister of the Republic of Pranks. Vitalii Sediuk is not a prankster. Physically accosting people on the street is not a prank. If it were a prank, more of us would have thought to do it, but we don't, because it's just assault.