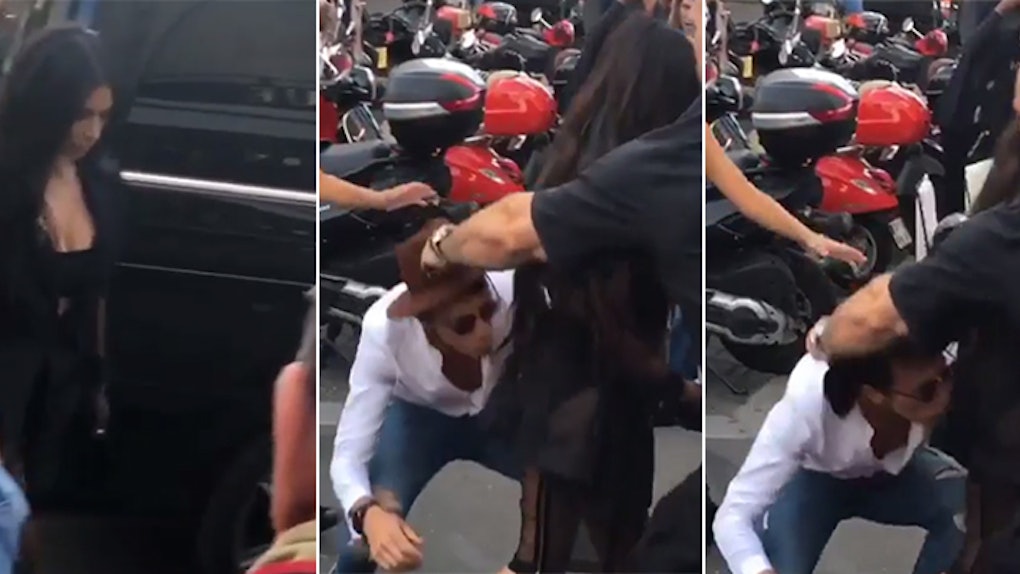 Kim Kardashian is the latest victim of assault. And she happened to be assaulted by the same man who attacked Gigi Hadid in Milan.

The "Keeping Up With The Kardashians" star was in Paris when the incident occurred. She was walking from her car when the stranger approached her from behind and attempted to kiss her butt.

The video shows the man being tackled the ground immediately as security came to Kim's rescue. The reality star, looking frazzled, made her way safely passed paparazzi.

The man has been identified as Vitalii Sediuk who is known for "pranking" celebrities at events and public appearances.

Another video captured by the Daily Mail shows additional footage of the prankster running away after the assault.

According to the source, Sediuk had attempted to grab Kim two years ago as she arrived for Paris Fashion Week in 2014.

Just a week ago, he grabbed and picked up Gigi Hadid while she was walking back to her car during Milan Fashion Week.

Badass Gigi Hadid was able to elbow her attacker in the face and fight him off. Kudos to you, Gigi. What a dick.

As pictured above, Sediuk is wearing the same exact hat and sunglasses to disguise himself.

Fortunately, the model appeared to not be injured from the assault.

Gigi went to Twitter after the incident to thank her boxing coach and warn other women to prepare themselves for these kinds of situations.

She also called out people who criticized her for "lashing out." Clearly, her response was a completely normal (and appropriate) reaction.

Vitalii Sediuk, you messed with the wrong girls. Gigi Hadid and Kim Kardashian can kick your ass any day. Stay strong, ladies. We're here for you.