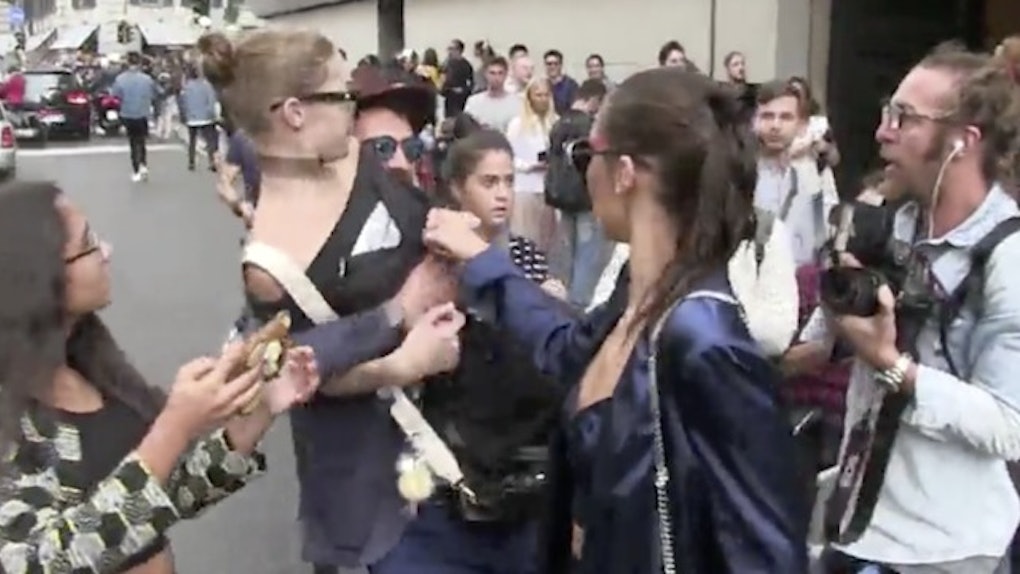 One minute, Gigi Hadid's causally walking out of a fashion show with her sister. The next minute, she's on the verge of a street fight in Italy.

The struggle occurred when a random man come up from behind the 21-year-old supermodel and picked her up. After she gave the man a few elbows, he let her go and skipped away.

Video of the incident was captured in the clip below.

The man is rumored to be the infamous Vitalii Sediuk, who's made his name pranking celebrities like Kim Kardashian and Anna Wintour. In one of his most famous stunts, he tried to kiss Will Smith and ended up getting slapped in the face.

On this occasion, the man ended up getting elbowed in the face and probably would've gotten worse if he hadn't run away while her crew held her back.

Gigi and Bella Hadid are in Europe for Milan Fashion week, where they have both been killing the runway, as per usual. The two sisters had just exited the Max Mara show when Gigi was grabbed from behind.

The model addressed the incident on Twitter in response to a headline from the The Sun, which said her reaction wasn't "Model Behaviour."

Gigi knows she gave the guy that work, too. That much is clear after she made sure to note how quickly he scampered off.

and had EVERY RIGHT to defend myself. How dare that idiot thinks he has the right to man-handle a complete stranger. He ran quick tho /p>— Gigi Hadid (@GiGiHadid) September 22, 2016

Oh, and if you're surprised by how prepared the 21-year-old was to get her hands up, you need not be. It's not like she's never put on a pair of gloves before.

You know what they say: You ain't got to get ready if you stay ready.

Citations: Furious supermodel Gigi Hadid lashes out at fan and has to be held back by security after prankster lifts her up as she leaves Milan fashion show (Mail Online)