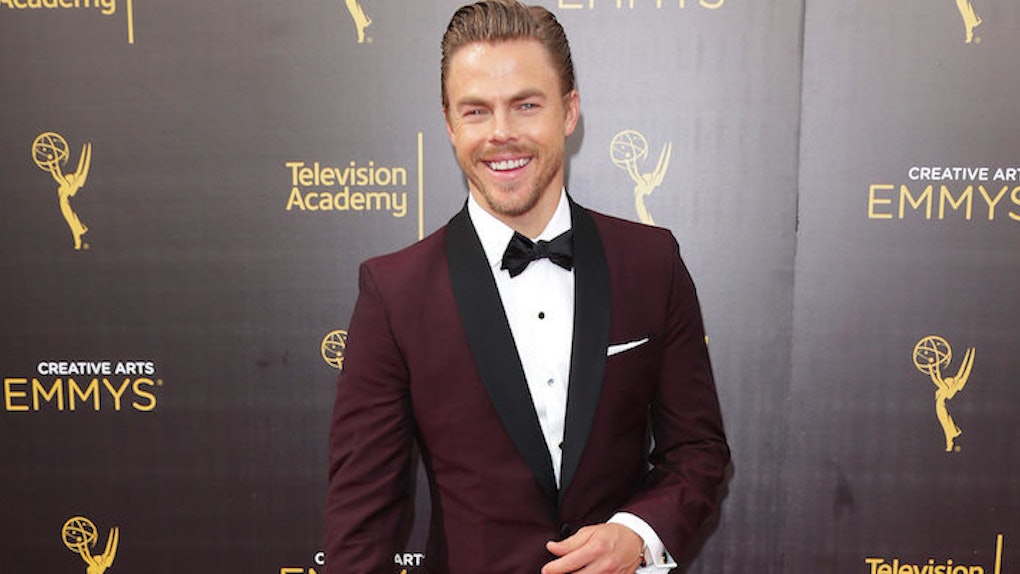 Derek Hough Stood Up To Lochte Protesters on 'DWTS'

There has been a lot of controversy surrounding six-time Olympic gold medalist Ryan Lochte lately, but few would assume that drama would translate over to normally family-friendly reality TV.

Yet, that is exactly what it did.

On Monday evening, two protesters ran to the ballroom floor on the 23rd season premiere and dancer Derek Hough made a move to defend his "home."

Two men ran in front of the host of the show, Tom Bergeron, to yell at the camera while they wore shirts that sported Lochte's name with a red circle around it and a line through it.

Shortly after Lochte and Cheryl Burke performed a foxtrot, the two male protesters ran to the floor. The older man yelled and approached one of the cameras and was tackled by security.

Hough took to the stage and told security to "get them out of here."

This is my home and I was just so shocked that people would come here and be so negative. This is a safe place for people to learn a new skill and seek redemption or start a new chapter in their life and that's what Ryan is trying to do and I just felt so defensive that someone would try and ruin that for him and for everyone watching, so I took it upon myself to make sure they were escorted out. I wanted to protect my home.

They quickly tried to cut to commercial break, but both Lochte and Burke were affected by the moment in a behind-the-scenes cut. To show support, the audience chanted Lochte's name after the incident.

Ryan was backstage and close to tears. Everyone makes mistakes and I really hope America gets to see the guy we are all getting to know, which is a really, really nice guy.

This comes after Lochte's controversial time in Rio, where the swimmer had fabricated a story about being robbed at a gas station.