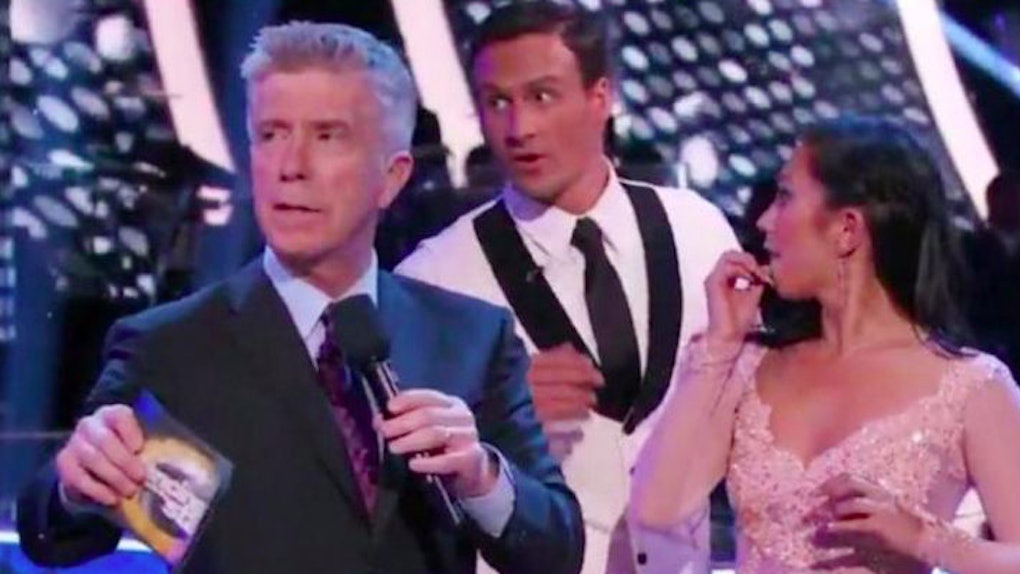 Ryan Lochte seemed to be on a mission of self-redemption on Monday's premiere of "Dancing With The Stars."

However, following his foxtrot dance routine with Cheryl Burke, two protesters got up and stormed the stage, positioning themselves in front of host Tom Bergeron.

Needless to say, it was a scary televised moment. What can I say? These fools rushed in.

The two men were wearing shirts that had Lochte's name circled in red with a strikethrough crossing it out, and when one of them approached the camera, a security guard shoved him into Lochte, Burke and Bergeron.

Yeah, hands off the camera, bud, or you're going straight into an Olympic gold medallist dressed to the nines.

Here's an audience member's video recording of security tackling one of the protesters.

In the video at the top, the camera stays on judge Carrie Ann Inaba, making the moment truly unnerving -- as a viewer you have no idea what's going on.

It's clear from this clip showing Lochte learning some fancy choreography that Ryan wanted tonight to go smoothly and didn't want to let anyone down.

Despite what happened afterward, Ryan absolutely nailed the foxtrot to "Call Me Irresponsible." Irresponsible is also what I'll call these two dudes who stormed the ballroom stage.

According to People, Cheryl cried following the nerve-wracking scare, and Ryan was visibly shaken.

Can you blame him? I mean two dudes just came out of nowhere and approached him on-air! If it were Michael Phelps, he'd probably just do his scary stare, but this is Lochte we're talking about!

Derek Hough reportedly yelled "get them out of here" before security gave them the ole heave-ho. You tell 'em, Derek!

When they came back from commercial, Ryan told Bergeron the following,

So many feelings are going through my head.