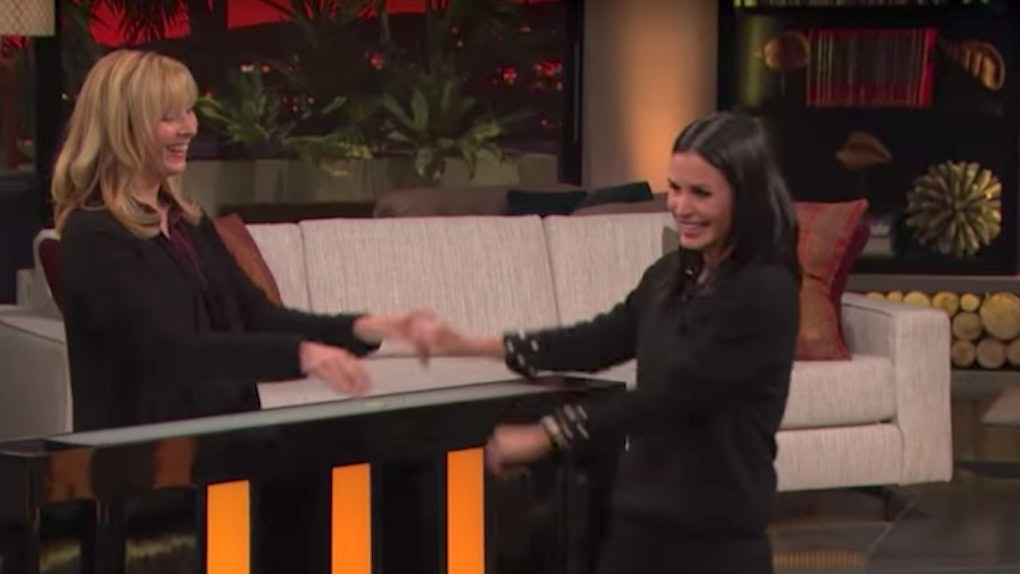 Who knows "Friends" trivia better than cast members of the show?

Courteney Cox and Lisa Kudrow made an awesome team on "Celebrity Name Game" where they had a bonus round of "Friends" trivia for the audience.

And man, did they kill it.

Courteney Cox is actually an executive producer of the show and Lisa Kudrow was a recent guest.

They were able to answer nine "Friends" trivia questions in just 45 seconds.

A character or place from the show appeared on a big screen behind Kudrow, and Cox had to give her a description until she guessed it right.

It started off easy, with the name, "Chandler Bing." All Cox had to say is, "I was married to him!"

It was so cute to see Kudrow's face light up when Cox said, "You sang a song about it," and she immediately knew the answer was "Smelly Cat."

Kudrow also got to show off her awesome Joey Tribbiani impression with his famous quote, "How you doin'?" Classic.

For the last answer, all Cox had to do for Kudrow to guess "David Schwimmer" was say "hi" in the most Ross way possible. Of course, she nailed it.

Hey, Courteney, have you been practicing your Ross impression?

The only one Kudrow stumbled on was "Ugly Naked Guy." She at first said, "Naked Ugly Guy," but corrected herself pretty quick.

It was heartwarming to see these two hang out on TV again.

Wondering what these pals have been up to? You can see Cox in the 2016 movie "Mothers and Daughters" alongside Susan Sarandon. Kudrow recently guest-starred in the second season of Netflix's "Unbreakable Kimmy Shmidt" and you'll see her in the new dramatic thriller "The Girl on the Train," which comes out October 7.

Now, excuse me while I go binge-watch season three of "Friends" on Netflix.

Citations: You Have To Watch Lisa Kudrow And Courteney Cox Nailing Some “Friends” Trivia (Buzzfeed)