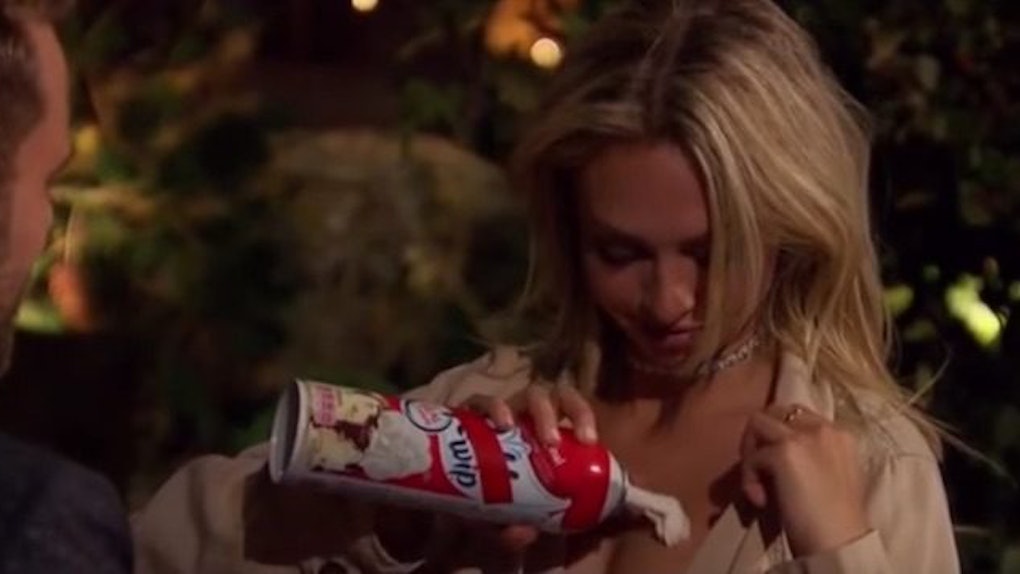 It's starting to seem like even “Bachelor in Paradise” isn't enough spotlight for Corinne Olympios, whose bizarre behavior and quotable one-liners on this season of “The Bachelor” were its only saving grace.

This woman does not belong in some ensemble cast of rejects. She needs her own series. Maybe “The Bachelorette” isn't her speed, but an “I Love New York”-ish series could be perfect.

WAKE UP, MARK CRONIN. THIS IS YOUR CALL TO ACTION.

The queen of cheesy pasta and sexual bargaining talked to ET about some of her more memorable moments on season 21.

Regarding the infamous whipped cream scene, Corinne told the site,

It was Nick [Viall]'s birthday, actually, which no one really knew… It looked a little more provocative than I meant it to be.

While it's unclear how her decision to strip down naked under a trench coat and spray whipped cream on her boobs “Varsity Blues” style could be perceived as anything but provocative, this is the precise sort of risk taking that made Nick's season watchable at all.

Corinne is the voice of the people.

If any of us were invited out on a date only to end up scooping cow shit with a bunch of other women, we'd have the same reaction she did.

Why was that a date?! I'm still confused by that. It deeply upsets me. It disturbs my soul!

Though there was no shortage of animal poop on the show, the human poop was hard to come by.

There's laxatives in every bathroom… Pooping is very hard... There was a week when we are all like, 'I haven't pooped in seven days!' ... We were all bloated.

Bloated or not, Corinne is a goddamn star whose time on television was cut short too soon. She deserves another chance to Make America Corinne Again, and she deserves it now.