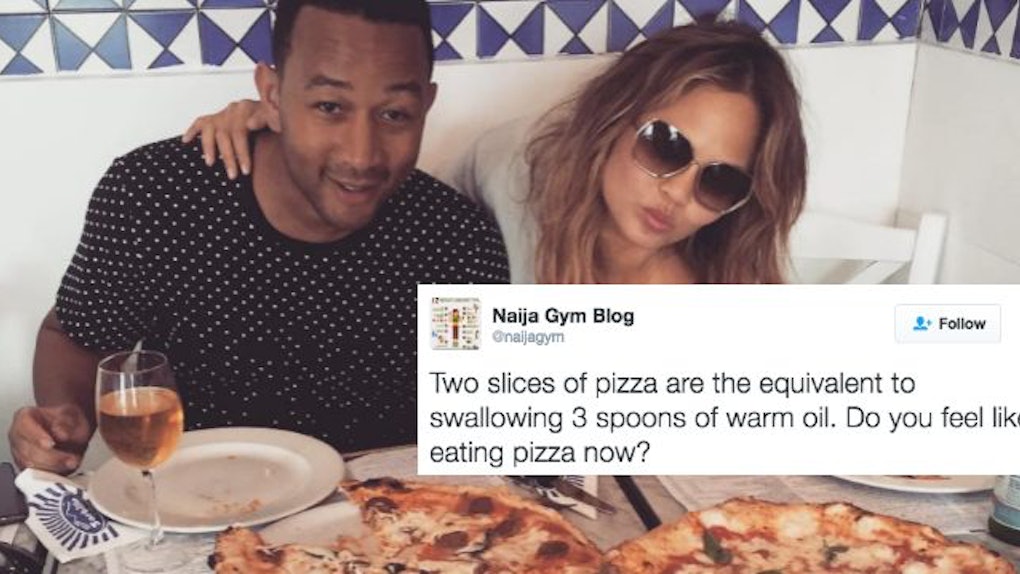 I'm from New York so you can already assume two things about me. First, I say "bada bing, bada boom" all of the time. Second, pizza is my life force.

I was on the phone with my brother this weekend, whom I haven't seen since the holidays, and all we discussed was how good pizza is. We agreed it's straight up ambrosia, nectar of the Gods.

That said, I feel personally attacked by this fitness blog's tweet about pizza.

If warm oil was wrung out of a dish rag that was used to clean up the pizza grease out of a brick oven, I would ask you for way more than just three spoonfuls, OK?

Thankfully, I'm not the only sane one on the internet.

Chrissy Teigen immediately tweeted the exact same thought I had after I read this.

I do mean I just said "Yep" to this ridiculous question.

Three spoons of warm oil isn't even gross? If we're talking about warm olive oil, some salt and pepper and some fresh bread to dip it in, then I'm even more on board?

Pizza is good for you. Science has explained why we're addicted to pizza. Some pizza places even give us tiny plastic tables inside of our boxes and even they serve a purpose.

As it turns out... pizza is the love of my life.

There are literally millions of us...

We will never be silenced.

*Literally eating pizza as I write this*

You just can't get between a person and their love for the greatest food known to man. I would chug straight-up motor oil if it meant I could get my hands on a New York Slice.

But I swear to god, if you show up with a Chicago-style deep-dish pie, I will slap you so hard your mother will feel it.

Citations: Fitness Blog Tries To Shame Followers Into Not Eating Pizza — Except NOBODY PUTS BABY IN A CORNER (BroBible)