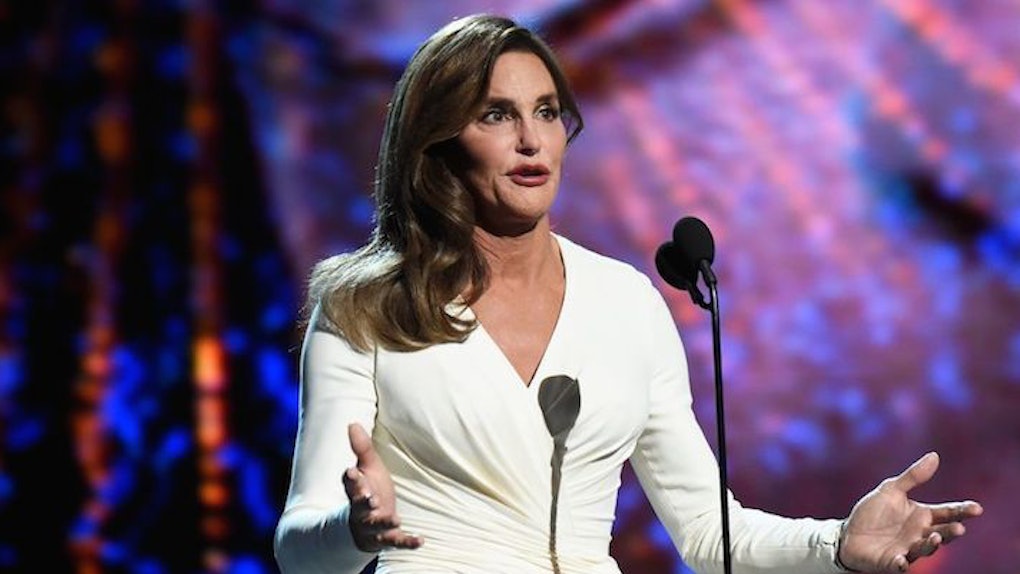 What Society Can Learn From Caitlyn Jenner's ESPYs Speech

I love someone very dearly. I love him to death. I always have, and I always will. But, whether he accepts this or not, he has bigoted opinions about LBGT issues and people.

I will admit I understand why he is the way he is.

He was raised in a Filipino-Catholic household, and this is how he was taught to view the world. This was the only perspective in his life; it’s all he knows.

I've always believed people should never have to justify how they feel. Despite knowing all of this, his ignorance breaks my heart.

We watched the ESPYs together last night. Caitlyn Jenner was on stage accepting the Arthur Ashe Award for Courage when she mentioned the hope — the need — for society to respect the transgender community.

As she continued on, I couldn’t help but notice him shaking his head. He went on to discuss how this is “all scripted for dramatic effect. The Kardashians just want money.”

He referred to Caitlyn as a “she,” and then he immediately took it back and called her a “he.”

In that moment, I realized why we need a public figure like Caitlyn Jenner and why representation matters.

During the ESPYs, it was announced that the suicide attempt rate for the transgender community has reached up to 41 percent. That is practically half of the community.

Can you imagine what it’s like to not only have people constantly identify you as the wrong gender, but also to have people all around you— people you don’t even know— feel like they get to have a say in who you are?

Regardless of whether or not you relate to this perspective, just imagine being in that position. If that’s not heartbreaking, I don’t know what is. It’s no wonder the self-harm rate is so high.

Here’s the thing I wish he would understand: While our identities serve as a major part of who we are, they will never define us entirely. But, they do help us to understand who we are and our needs in this world.

We cannot control who we inherently are. And lives should not be taken because of that.

Suicides and murders -- including Mercedes Williamson, the ninth confirmed transgender homicide victim in the US this year alone -- are in no way acceptable.

Would he just shake his head and call me dramatic? Would he take the time to listen to me?"

But, it’s not about me. I’m straight, and I’m cisgender. So, instead, I think of all my friends and all the people who do identify within the LGBTQ community.

I think about how much I love them and how much I admire and respect them for everything they have accomplished. I think about their bravery, which I will never fully grasp or comprehend.

Then, I think about him. I feel this disconnect because I love him, and I can’t reiterate that enough.

Along with that, I love my friends, and I hate that he doesn’t fully understand them or want to understand them. I hate how I feel anxious or nervous to bring these two entities together in my life.

Though this isn’t exactly about me, I want to reiterate why this affects me.

Even if I am just a Starbucks-loving, basic, straight-edge girl, I hate how I have to hide my friends' identities from this one person in order to protect them from his judgments.

They have been open about who they are, and it makes me feel awful I feel the need to hide that to protect them.

I don’t want him to feel uncomfortable, but I certainly don’t want to lose my friends for the way he feels. I especially fear my friends will see me differently due to his perspective.

But, if he could just listen, he would hear and understand what Caitlyn Jenner’s speech was all about.

Even if this were all for the money, the fame, the attention or for whatever it may be, at least we are finally and publicly having this very important conversation that needed to happen a long time ago.

Yes, people are different from one another. In fact, we should encourage and embrace that.

But, most importantly, in order to get to the point of acceptance, we first need to conquer the bare minimum. It’s a baby step, but it's monumental.

Gay, lesbian, bisexual, transgender, queer, questioning, asexual or pansexual: Regardless of your identity, we all deserve to be heard.