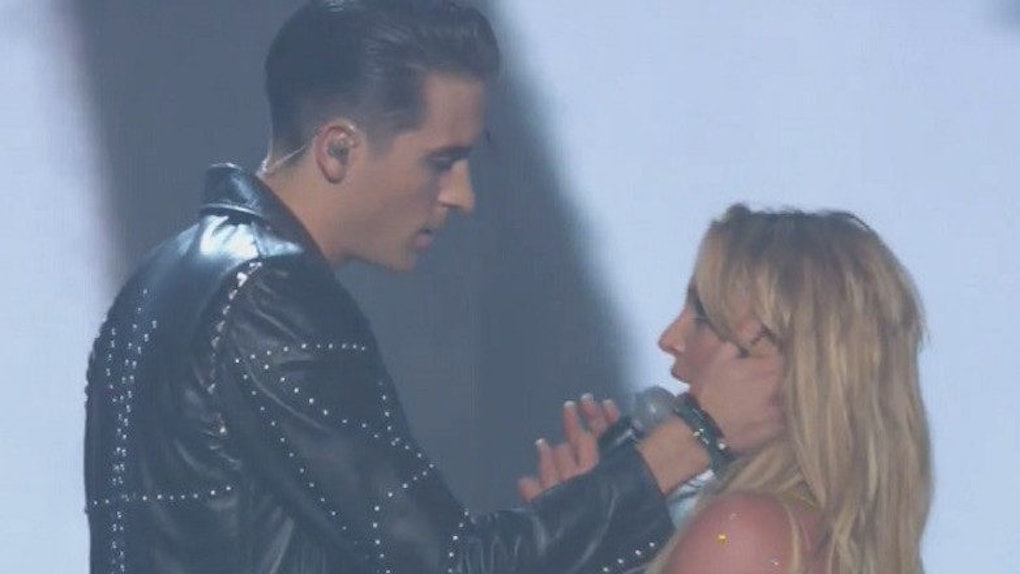 Britney Spears Denies That G-Eazy Tried To Kiss Her

The real standout moment from Britney Spears' performance at the VMAs wasn't her strutting around in a Borat-esque outfit, nor was it the background dancers that looked like human QR codes.

No, it was the moment when G-Eazy tried to go in for the kiss, and Britney performed a massive swerve to the right. Sorry, G-Eazy but you're not Madonna.

She even shook her head as if to say "nope." Take a look at the cringe-worthy televised rejection.

Basically, G-Eazy is all of us on a first date getting turned down after the walk back to the car.

But now, Britney Spears is shutting down the rumor mill that G-Eazy even went in for the kiss in the first place.

While talking with 92.3 AMP Radio, Britney admitted that she didn't think his neck grab-swoop combo was actually a move, saying,

No, I don't think so. He has a girlfriend!

Well, the video begs to differ. And even if I had a girlfriend and was dancing with Brit, I don't know what I'd do. It's a hypothetical question that I hope to one day answer (call me, Britney).

The "Make Me" singer also opened up on whether or not the now famous crotch grab of G-Eazy was planned, saying,

In rehearsals, there wasn't really anything planned for us to do, so when we got there… I didn't honestly really know what I was doing, and I kind of do something similar to that in my show in Vegas, so I went on automatic with what I do performing live, and I just did what I do to the dancers in Vegas… We did rehearse. We had one rehearsal. We didn't really touch each other. It was just like, 'Hey, OK, you do your thing. I'll do my thing.'

What do you when you don't have "anything planned?" Why, you get handsy, that's what!

And seriously, Brit. When it comes to G-Eazy's moves, he's not that innocent.