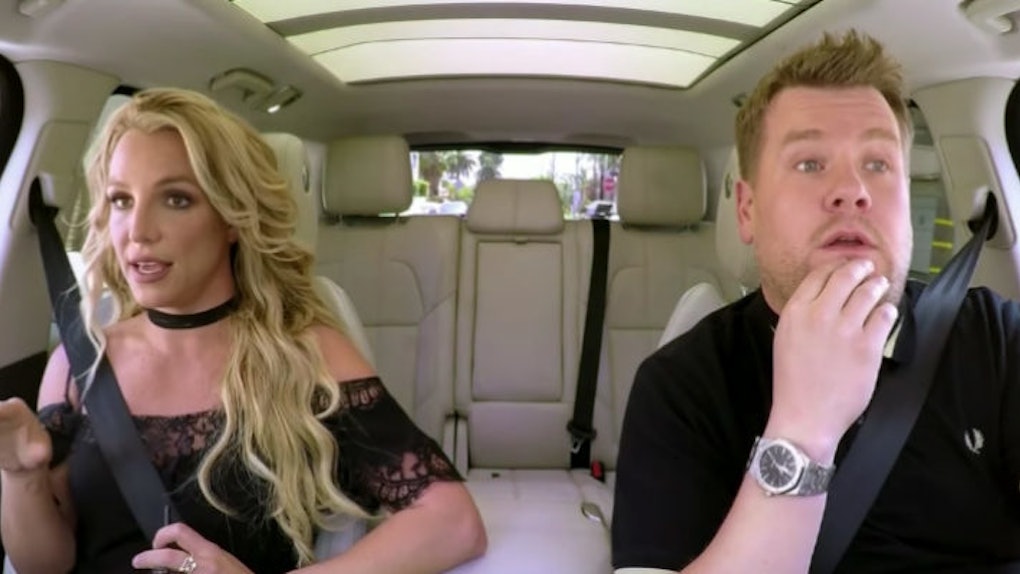 Britney Spears certainly hasn't been afraid to speak her mind lately, and we're loving it.

Just recently, she brought up Justin Bieber's nudes, and now we have all the deets about her appearance on "Carpool Karaoke."

Spears, whose ninth studio album, Glory, dropped today, appeared on 103.5 KTU's "Cubby And Carolina In The Morning," and she was pretty candid about the now-famous James Corden bit.

When asked about about her experience in the car with James Corden, Britney replied,

Yeah, it was fun, it was really fun. The guy was just so incredibly sweet. I had no idea he has kids, he's a teddy bear. I was like, 'I just want to hug you right now'. It was a little awkward like driving by grocery stores. People walk by and there are like 18 cameras around us. This is just so awkward.

The radio host then asked her if she had prior knowledge of what songs Corden planned on playing. She said,

I don't remember. Well he controlled the whole thing, and sometimes I got onto him and said, 'I don't want to hear that song again'. They didn't show that part...

Answering the natural follow-up question -- exactly which songs she didn't want to hear -- the Queen of Pop said,

Of course 'Baby' and 'Oops'. Oh my God, and he kept playing them. He put a wig on for it. Yeah, I totally went along with it.

We can't really blame Britney for not wanting to hear those songs, especially when she's got so many other fire bops.

Big ups to both Spears and Corden for creating something so fun and nostalgic (and especially Corden for rocking that Spears outfit).