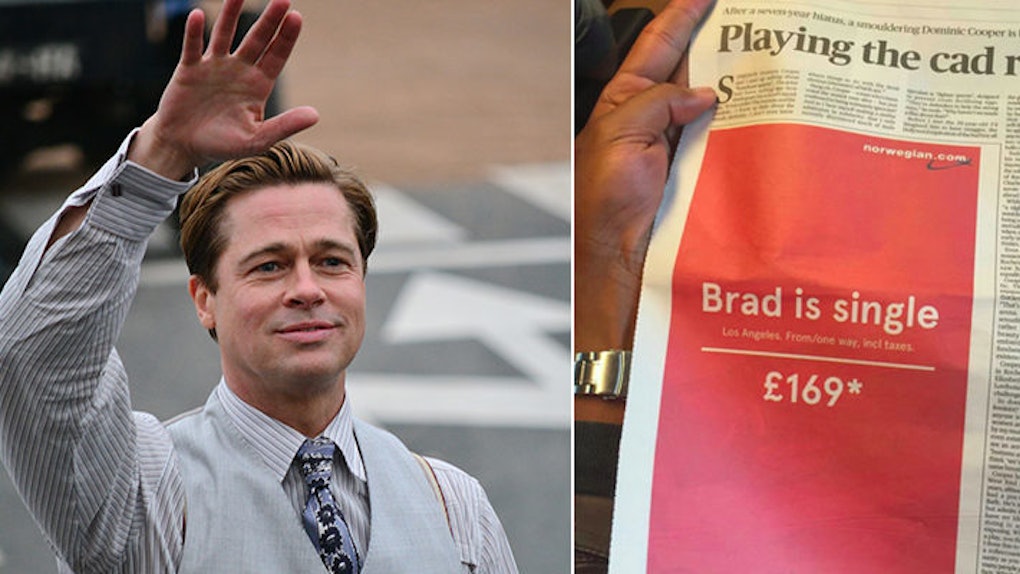 An airline is offering you a cheap flight AND a husband.

Has the man of your dreams been unavailable for years? Is he recently divorced and in need of companionship?

The airline created an ad in the London Evening Standard to promote a one-way flight from London to LA using the newly single actor as incentive.

Hopefully people don't take the ad too seriously, though, since Brad Pitt 100 percent did not agree to this.

I guess that's a risk Norwegian Airlines is willing to take.

Things get a little more questionable when you remember Brad Pitt is currently being investigated for child abuse following a fight on their private plane.

According to insiders, Pitt appeared to be “drunk” and was “yelling” while the plane took a stop at Minnesota's Falls International Airport.

The incident occurred on Wednesday, September 14.

I guess Norwegian saw the drama as a great opportunity!

According to Twitter, people seem to be a fan of the airline's marketing and are already looking into purchasing flights.

Hopefully we'll find out more details on Brad and Angelina's divorce soon. If you can't wait to get answers, book a trip to LA and ask the man himself.