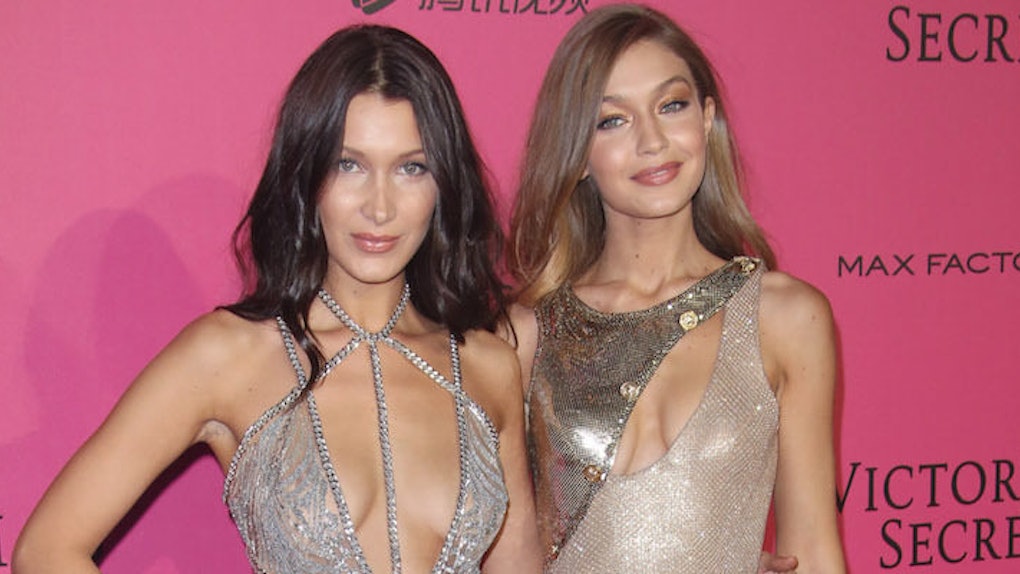 It's me, a very beautiful woman who knows all about sex appeal and never once accidentally farted on her high school boyfriend in front of their friends while sitting in a hammock.

That was probably you. It was not me. I am sexy.

I also have an evolved understanding of Gigi and Bella Hadid's sisterly supermodel bond. Why? Because I, too, have a beautiful sister. We look great in pictures and support each other's dreams.

Thursday, following the November 30 shoot of the Victoria's Secret Fashion Show in which both Hadid sisters walked, Bella shared a photo on Instagram.

I cried when I saw my sister put her wings on for the first time.

Some of you may be wondering why Bella cried. Isn't this a joyful occasion? A major achievement? Yes, it is.

My sister Natalie and I comprehend Bella's profound emotional support of Gigi better than most because we are stunningly attractive and steadfast in our commitment to being the wind beneath one another's wings.

Here we are, both looking (most people would agree) equally as sexy as Bella and Gigi, celebrating one another's realized dream of getting Taylor Swift tour tickets from our parents for Christmas one year.

This achievement is equally as special as walking in the Victoria's Secret Fashion Show (most people would agree).

You may also notice, much like Gigi and Bella, Natalie and I do not suffer from disparate levels of attractiveness.

Despite being younger and not having her own pair of indoor earmuffs (pictured above), Natalie (L), is no less show-stopping than I (R).

Sure, Gigi has been in the modeling business a hair longer than Bella, but the VSFS sees both sisters on the same stage, sharing the same success and the same degree of gorgeousness.

Natalie and I are equally gorgeous and sexy, so while we understand sibling rivalry, we don't perceive any difference in sexiness between the two of us.

Yes, I am older. I have more experience being hot and I have glasses that help me make better direct eye contact with men and modeling agents, but my sister and I are, above all else, equals to one another and the Hadid girls.

Ask absolutely anyone (most people would agree and I cannot stress that enough).

Controversial as it sounds, being sexy hot starts during childhood and is a lifelong journey toward perfection.

Gigi and Bella occasionally post throwbacks to remind fans they have always been impossibly gorgeous.

The truth is, their beauty is genetic and likely unattainable, just like mine and Natalie's.

Check us out as sexy child farmers below.

It bears repeating (though I really do think most people would agree), the only way to truly understand the lives of sisters like Geeg and Bels is to walk in their shoes.

Understandably, many of you do not have the opportunity to do so, being either sibling-less, having unsexy sibs or being very unsexy yourselves.

Take it from someone who is so breathtaking, her sister and her sister's boyfriend are always saying stuff like, “You'll definitely find someone to love. Please stop eating this food. We are trying to have a nice dinner, just the two of us” --  sister sexiness and sister support are two full-time jobs.

You don't want this burden. Leave it to us.