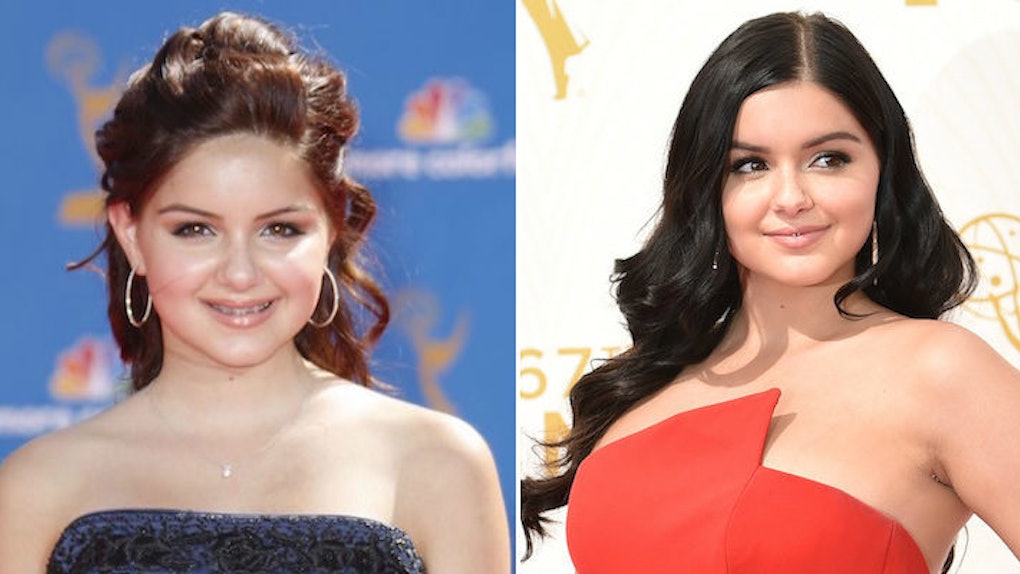 Listen, Ariel Winter has been to a lot of Emmy Awards Shows.

She's been to one every year since she was 12 years old, to be exact.

Thanks to "Modern Family's" seemingly never-ending winning streak, the 18-year-old actress who plays Alex Dunphy was low-key raised on the red carpet.

On the show, Alex is an introverted bookworm who judges her older, wilder sister.

But in real life, Ariel Winter has become something of a sex symbol herself, wearing skin-tight outfits to Drake concerts and showing off her curves on Instagram.

And while it's mostly OK to appreciate the natural beauty she's been graced with, I'm here to make you guys all feel really weird about it by showing you pictures of her at the Emmys as a pre-teen.

The very first year Ariel walked the Emmys red carpet was in 2010 when she was only 12.

She was sporting braces and a beaded bracelet like any 12-year-old would.

The next time she hit the carpet, she was 13 and still rocking those braces.

Ariel was actually criticized for wearing such form-fitting dresses on the carpet at such a young age, but she explained because of her figure she didn't have much choice.

In 2012, Ariel was finally free of the metal in her mouth and flexed those pearly whites on the red carpet.

At the age of 15, Ariel went with the dress every girl wears to her freshman prom (but she pulled it off a lot better).

And last year, Ariel looked more like the Ariel we know today.

This was also Ariel's first Emmys following her breast reduction surgery in the summer of 2015.

Ariel and the rest of the "Modern Family" cast are headed to their seventh year at the Emmy Awards — which means a whole new year of scrutinizing a teenage girl by her looks!

Before we do, just one photo of Ariel from 2009, just to make sure you feel sufficiently weird about ogling over her recent pics. (Not from the Emmys, but from the premiere of "'Under The Sea 3D.")