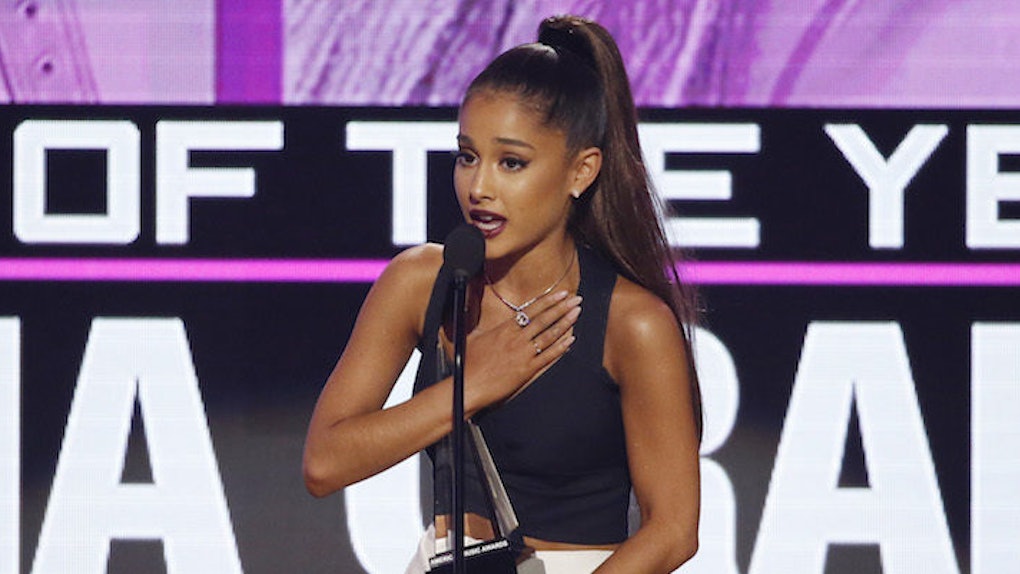 Ariana Grande won Artist of the Year at the American Music Awards Sunday night, and there are no words to describe how emotional she got on stage while accepting the top honor.

Really, though – she almost lost it halfway through her speech and had to turn away from the crowd to stop herself from bursting into hysterics.

If I was her, I'd definitely be on the floor in a puddle of happy tears.

She beat out some BIG names for this. I'm talking Drake, Justin Bieber, Selena Gomez, Adele... and even Beyoncé.

After admitting she was shaking, the "Dangerous Woman" singer gratefully accepted the award and began thanking everyone who's helped her throughout her journey this year.

She started by thanking her fans (who voted "so, so, so much") and expressed her immense appreciation for them. Then, she stated she'd love them "with or without" the award.

As an Ariana Grande fan, I teared up a little.

WE LOVE YOU TOO, ARIANA.

Just when her speech was going strong, she stopped herself again and expressed how nervous she was. With her award in hand, she said,

I can't believe this; I'm shaking. I'm nervous. This is horrible.

As nervous as the singer appeared, she was still insanely poised and adorable as ever. She's a pretty crier, that's for sure.

After thanking her family and Dangerous Woman team members, Ariana visibly fought back tears as the crowd didn't hesitate to cheer her on with support.

But right when she bounced back, the music came on and signaled the end of her speech.

After hearing the closing tunes, she wrapped her emotion-filled speech up in a heartfelt way that made me love her even more.

I just want to say that I'm so thankful for art, and I hope that whatever it is that I create in my life that you feel a little bit of light, and I hope that I can bring joy to you and make you feel unified and happy, and I love you.

At that point, I sobbed more than she did.