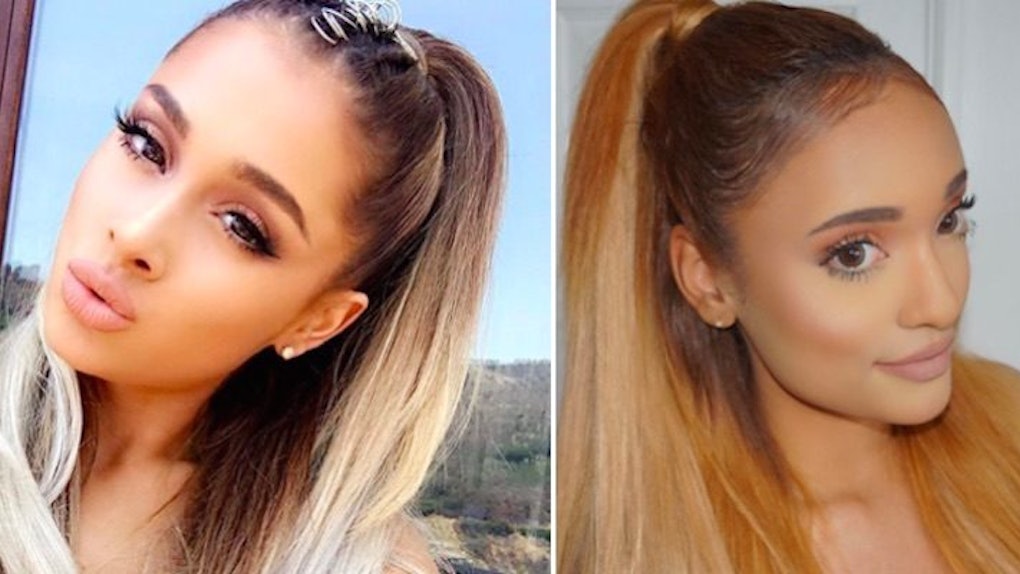 There's A Beauty Vlogger Trying To Be Ariana Grande, And It's Working

Charles Caleb Colton once said, "Imitation is the sincerest form of flattery."

Unless, of course, someone is basically trying to be you by copying every damn thing you do.

From Kim Kardashian copycats to Taylor Swift's long lost twin, there are all sorts of celebrity look-alikes who will make you do a serious double take.

However, there's a new celebrity copy cat that's creating quite a stir on social media.

Allow me to introduce you to YouTube style vlogger, Jessica Teekasingh, aka JessChic.

Now, if your first thought was "Wow that girl looks a hell of a lot like Ariana Grande," you're not alone.

Since Teekasingh seems to have Grande's signature style down to a T, you can only imagine how confusing this must have been for fans who spotted this Ariana Grande doppelgänger galavanting around Disneyland.

Despite looking like a carbon copy of Ariana Grande, Teekasingh claims that she doesn't mimic the star's appearance.

However, some of their photos seem way to similar to be coincidental.

Well, I'm pretty sure the same thing is going on here.

Check out the pictures below to see to see this Nickelodeon diva's doppelgänger.

It's not hard to see that Jessica Teekasingh is getting some serious style inspo from Ariana Grande .

They have the same go-to moves...

Not to mention, the same signature expressions...

...so, obviously, Teekasingh rocks the same look on the reg.

...so it should come as no surprise that Teekasingh does, too.

If Ariana posts a polaroid photo on Insta...

...it's only a matter of time before you see one on Teekasingh's feed.

Ariana has been a big fan of the doggy face Snapchat filter for some time now...

...and, apparently, Teekasingh is too.

Check out the video below for a closer look at this Ariana look alike.

Citations: Dangerous woman! YouTube star with striking resemblance to Ariana Grande says she was bombarded by confused fans during a trip to Disney World - despite DENYING she was the singer (Daily Mail)