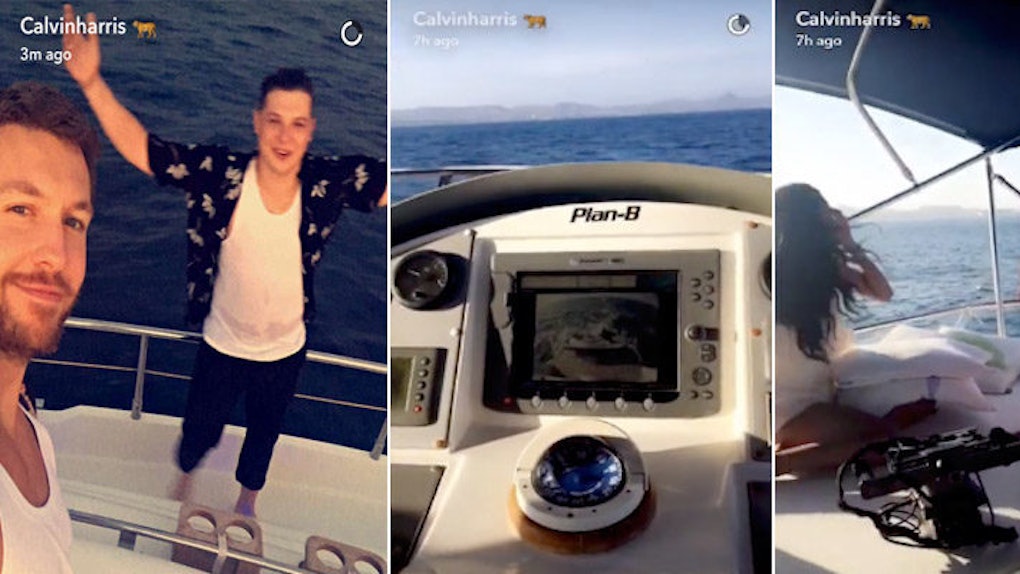 It looks like the 32-year-old DJ is trying his best to move on from Taylor Swift after their split. The couple called it quits early June, and since the breakup, Taylor has already moved on to English actor Tom Hiddleston.

But WTF has Calvin been up to lately? Is he OK? Well according to his latest Snapchats, it looks like he's doing just fine.

The DJ spent Tuesday afternoon relaxing on a luxury yacht with a group of beautiful women.

He first added some videos of him messing around on the boat. Silly Calvin, be careful!

Then he posted this selfie to his Snapchat story and captioned it "I write songs." LOL, BYE CALVIN.

I wonder if Taylor and Calvin are still friends on Snapchat. I feel like there's a 90 percent chance he hired these random women off Craigslist to take a pic with him just to make Tay jealous.

What? You've never done that before?

Oh, and can we talk about Calvin's boat for a sec? IT'S CALLED PLAN-B? Whatcha tryna say, boy?

I mean, he did unfollow her on Twitter and blocked all her fans, BUT BESIDES THAT, it looks like things are good and dandy!

Calvin, I hope you had a wonderful boat ride and made great memories with these sexy ladies.

If you ever need another girl to make Tay jealous, hire me. I've been told I'm a four out of 10 on a good day, so, I got you.