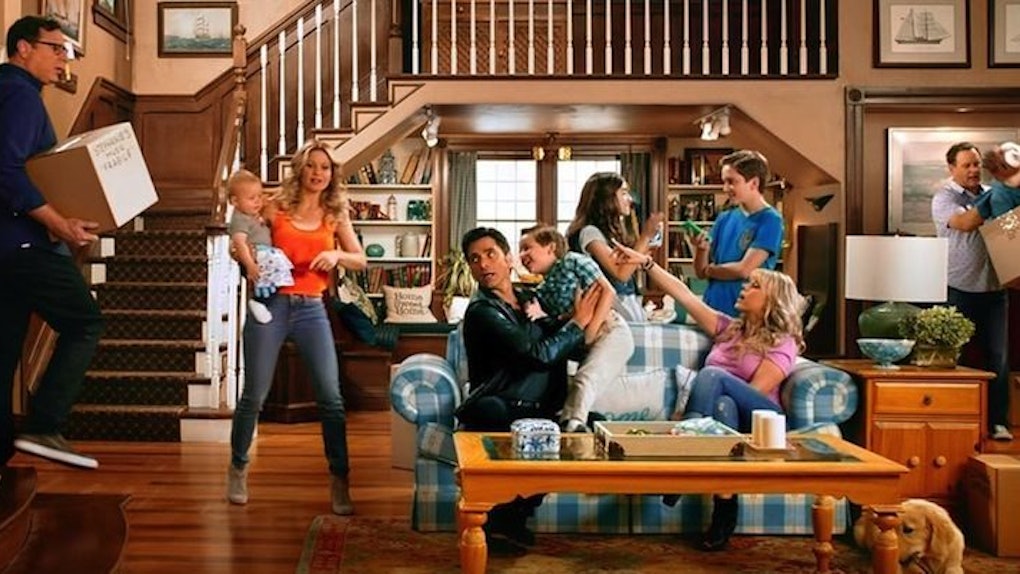 Whether we wanted it or not, “Full House” is back.

“Full House” is the latest casualty in Hollywood's never-ending battle to exploit our childhoods for money by making reboots.

Studio executives know we're gonna watch new episodes of our favorite canceled shows, and they LOVE to take advantage of that fact.

Netflix rereleased the Bob Saget flagship show -- under a new name, “Fuller House,” and without as much Bob Saget -- at 3 am last night, and I decided to watch all of it in one sitting, tracking my psychological state in the process.

What I found out is “Fuller House” can really eff somebody up if not watched responsibly. It's going to take approximately $74,000 worth of therapy to fix what "Fuller House" did to me.

Below are the notes I took while watching the show.

Let's get a couple things out of the way. “Fuller House” picks up 29 years after “Full House” ends.

Nobody emotionally aged since we last saw the show. Danny is quirky, Jesse is a heartthrob, Joey is A RIOT, Steph is a free spirit, Nicky and Alex are still twins.

The only real difference is DJ has three kids and a spouse who is dead. Like father, like daughter? Too soon? Sorry.

Also, Michelle is obviously not there because… well, even in this made-up story, the Olsen twins have more demanding social schedules than the rest of the cast combined. Four minutes in, they make an awkward joke about this fact that essentially reads,

HAHAHA! THEY'RE MORE SUCCESSFUL THAN US! HAHAHAHAHAHA!

I will forgive episode one for how crappy it is. It's super heavy-handed, but it also kind of needs to be. If this episode didn't have a Mr. Woodchuck-sized pile of “Full House” references, then, honestly, what would be the point? It was actually kind of nice. Is it possible to get nostalgia from a series premiere? Because that's what I'm feeling.

Here is the one weird thing about the episode: All the characters act like they haven't seen each other in 29 years. It's like the family split up when the show ended and then got together right when “Fuller House” started. They keep saying stuff like, “Man! We still look great!” and it just feels weird and wayyyyy too forced.

I'm still awake and doing pretty well. Kimmy and her aggressively Spanish daughter Ramona moved into the “Full House” house, and honestly, they started to move into my heart as well.

The big star of this episode is Uncle Jesse's leather jacket, by the way.

The breakdown of jokes through the first three episodes of the show goes as follows:

38 percent: Someone says something important, and another person begins to answer but gets distracted by a cell phone.

29 percent: An older person says “selfie” or “fleek” or “Facebook” or “Instagram” or any products by Apple -- or just references a modern TV show in general.

12 percent: Someone makes a very specific reference to an earlier episode of “Full House.”

3 percent: jokes about how Mary-Kate and Ashley aren't on the show anymore.

1 percent: jokes involving Macy Gray. Nope, that is not a typo. She makes a real cameo, and it's BIZARRE as hell.

"Whatever happened to predictability" isn't an excuse for the heavy-handedness of this effing show. Somewhere during the end of episode three, I just started getting angry at how lazy the writing on this show is. Nobody has real conversations. Everyone just does his or her own Letterman “tight 5,” and somehow, it all kind of translates into communication.

This is probably what it's like to live with Carrot Top.

I never thought I'd ever say these words, but there is a nice, raw roughness to the original theme song that gives it the hard rock feel I'm missing in the new one.

On that note, Candace Cameron-Bure is a national treasure.

I'm starting to think about the universe this family lives in and how the family dealt with major national tragedies. Where was Kimmy Gibbler when Hurricane Katrina happened?

Did Comet live to see our nation's first African American president? Were DJ's kids born before or after the housing bubble?

I've legitimately been wondering how long Uncle Joey waited after 9/11 before he made his first joke and what that joke was. I think it had to be something topical and pro-America, right? Like I imagine he was at some club, and when he got to the microphone, he yelled,

Hey! Osama bin Laden! How about you CUT. IT. OUT?

And then he got a full standing ovation.

With that little joke the audience -- and America as a whole -- was probably able to emotionally find a way to start to deal with the events of that September day.

This is all I've been thinking about for 20 minutes. What's happening to me...

WTF!?!?!! STEPHANIE TANNER BOMBSHELL AT THE END OF EPISODE FIVE IS RANDOM AS HELL AND ABSOLUTELY HEARTBREAKING!!! THIS IS WAYYYYY TOO MUCH EMOTION FOR 5:50 AM ON A FRIDAY.

On that note, I wonder what Comet's funeral was like.

I'm starting to go nuts. The mixture of sleep deprivation and miserable child actors made me question my reality.

I've been Googling skincare regimens for a while because everyone is super hot in this show and has amazing skin. Time was FANTASTIC to the Tanner clan, and honestly, San Francisco is, like, one big Abercrombie catalogue.

It's like the Tanner-verse is just full of dudes who look like the Winklevoss twins had a five-way with Chris Hemsworth, Channing Tatum and young Burt Reynolds, and it somehow resulted in a baby.

I wonder how far science is from enabling men to have babies with other men. I say by 2022, this becomes a reality.

Anyway, Stephanie just did some joke with a cell phone. I don't know. It was a weak, miserable joke. The audience laugh-track liked it, and that made it worse.

You know who isn't in this show at all after the first few episodes? Saget, Stamos and Coulier. They GHOST from the show after like the second episode, except for occasional sporadic cameos.

I bet one of the uncles or Danny is secretly a Donald Trump supporter in the show or, like, aggressively anti-Planned Parenthood. Dads tend to have awful views like that, and Danny Tanner is the dad-iest dad of all time. I also bet he says stuff like, "Why not #AllLivesMatter?" all the time.

I'm currently watching the sunrise set to Kimmy Gibbler's voice. This should be a torture technique to get secrets out of captured ISIS soldiers.

This Vine should explain my current mental state.

These sh*tty kid actors aren't doing anyone any favors, either. Get that kid from “Room” into this show. He'd SLAY it. He's, like, a 5-year-old Steve Buscemi.

HOW THE GODDAMN HELL IS STEPHANIE DATING HUNTER PENCE?!?!? HE CAN DO SOOO MUCH BETTER.

Side note: Hunter Pence is not a terrible actor.

One of DJ's kids -- I still haven't bothered learning any of these kids' names, by the way -- brought a cow into the house. They tried to get the cow out of the room, and one of the kids said,

This cow is going to give my mom a cow!

I laughed for 45 seconds straight.

I lost all concept of things I like and don't like. Eleven episodes of "Fuller House" zapped my cognitive reasoning abilities.

The sound of laughter is actually making me cringe. They have a laugh track going on this show, and it's causing a Pavlovian response of my lungs shrinking up in my throat any time the audience responds to anything.

The laugh track actually made me question my sanity. WHAT IS THE AUDIENCE LAUGHING AT?!?! WHAT AM I MISSING!?!? Right now, the audience is losing their f*cking SH*T over Kimmy making a really large sandwich.

That's it. That's the entire joke. They are laughing because this sandwich is bigger than most other sandwiches.

I'm missing something. I have to be. I'm the dumb one here. They ALL can't be wrong, right? I have to be the wrong one, right?!?!

I'm watching this show through my Xbox One and because I watched all 13 episodes in a row, I unlocked an achievement on Xbox Live called "I Can't Get Enough of This Show!"

I've never been more disgusted with myself. Finishing this show is, technically, an accomplishment, but in the same way eating an entire box of Cinnabons in one sitting is an accomplishment. Sure, you completed something, but also, ewww, you're a disgusting human being.

So, in case it wasn't obvious, this show is complete and utter cat sh*t. It's top-to-bottom awful. The writing is lazy, and the plot is simpler than a two-piece floor puzzle. Candace Cameron-Bure deserves better. We all deserve better.

I'm going to sleep for the next week.