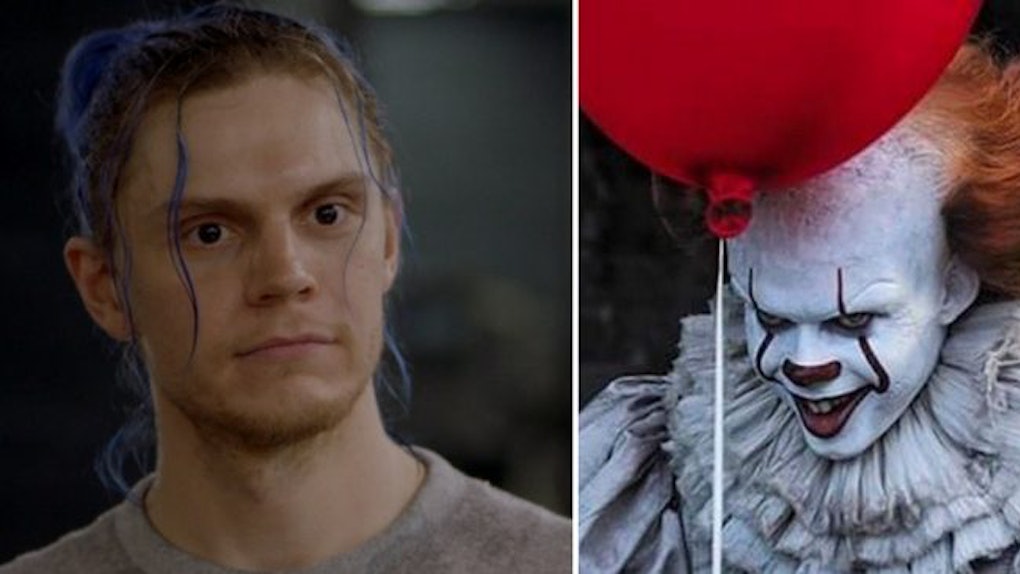 'American Horror Story: Cult' Easter Eggs Connect The Show To 'It' In The Most Horrifying Way

We're in the middle of the most terrifying circus ever right now, with creepy killer clowns coming at us from both the TV and the movie screen thanks to the success of American Horror Story: Cult and It, but it looks like the similarities between the two horrifying hits go deeper than the clown makeup. One of the American Horror Story: Cult Easter eggs sprinkled laid out within the terrifying new season actually connects the show with Stephen King's supernatural thriller It. As if things weren't already scary enough...

With all the murderous clowns and settings in quaint little northern U.S. towns, this season of American Horror Story already has a lot in common with It, and a closer look at the opening credits reveals the new season isn't done drawing similarities between itself and It. Specifically, you might notice a brief glimpse of a clown coming out of a coffin at the beginning of the opening sequence. No big deal, just your ordinary chilling creepiness, right? Well, not so much once you see that red balloon pop out along with him. As everyone who's seen It (or even just one poster or clip from the newly adapted horror movie) well knows, a clown holding a red balloon has got to be a clear allusion to Pennywise.

Check out the full opening credits for the American Horror Story: Cult below, and take note of that balloon segment about 18 seconds in.

The Pennywise shoutout is actually just one of the many classic horror movie shoutouts hidden within the opening credits. The carefully curated cavalcade of creepiness that is this season's opening sequence also includes Easter eggs connecting the season to Halloween, Silent Hill, and Nightmare on Elm Street. Rewatch the opening sequence again and see if you can pick up on all of them: there's a quick shot of a clown dressed to look like Michael Myers, a man in a hazmat suit standing in front of a carousel as an homage to the Silent Hill franchise, and a shadowed silhouette that unmistakably belongs to Freddy Krueger. The appearance of twins and bees may also be nods to other classic horror flicks The Shining and The Wicker Man, respectively, but those allusions aren't as clearly laid out as the others.

Though the opening credits are knee-deep in references and shoutouts to classic horror movies, this season of American Horror Story is a completely original plot. It follows married couple Ally and Ivy Mayfair-Richards (Sarah Paulson and Alison Pill) and how their lives become supernaturally horrifying following the election of Donald Trump as president, alongside the increased power and authority that a local man named Kai Anderson (Evan Peters) begins attaining following the election. Oh, and a cult of murderous clowns also figures into the whole thing.

But the series actually does have one very important nod to classic horror within its main story. As the horror blog Bloody Disgusting pointed out when the season was still in the process of filming, the bulk of the Cult season is set on the same street that Michael Myers stalked in the original Halloween. In fact, that reference is front and center, as the main home of the new season that Ally and Ivy live in is actually the Wallace's household from Halloween. I guess that house is just doomed to always be the creepiest place on earth.

The 2017 adaptation of It is still currently in theaters, and a sequel is in the works to be released at the end of 2019. Season 7 of American Horror Story, subtitled Cult, airs Tuesday nights on FX.