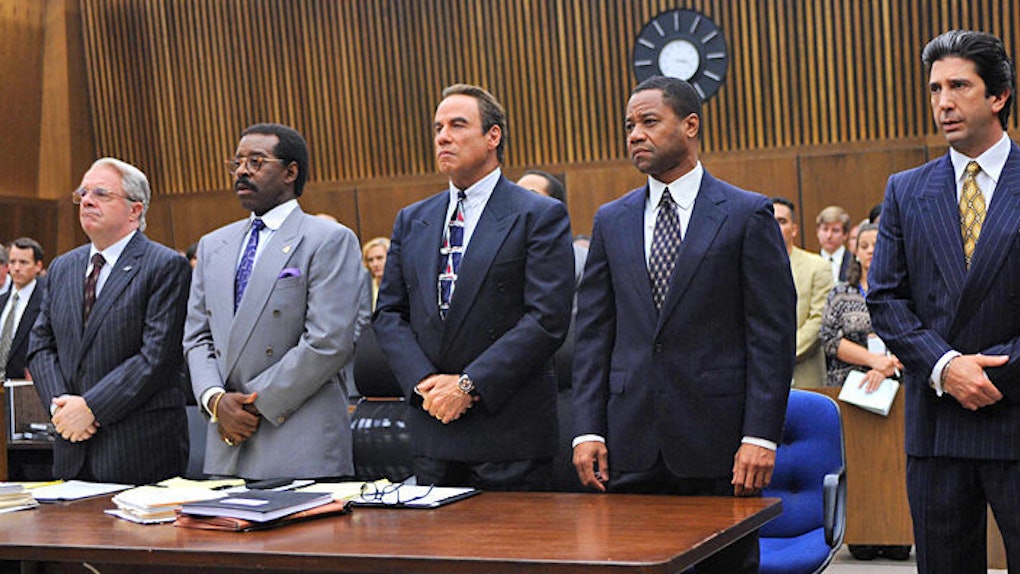 Have you been watching “American Crime Story: The People v. OJ Simpson”? Because, damn, you really should. Like, if you aren’t, fix that right away. Sorry to recommend yet another must-watch show, but this one’s worth it.

Yeah, it could have been a cringeworthy mess of pure exploitation, but to my surprise, the show has actually managed to give us a balanced yet entertaining take on the subject.

That said, while everyone involved does an impressive job of explaining the case, it’s still just televised drama. Watching it won’t give you the complete story.

Thankfully, there are plenty of books and documentaries out there to fill in the gaps. Fans of “American Crime Story” are already eagerly awaiting season two (even if this one isn’t over yet), but in the meantime, give these a look.

1. “The Run Of His Life: The People V. OJ Simpson” by Jeffrey Toobin

If “American Crime Story” whet your appetite for more info on just how Simpson’s dream team of lawyers managed to convince a jury to let him go free, Jeffrey Toobin’s book -- which served as the basis for the show -- should do the trick.

As a former prosecutor, Toobin has the right experience to tell this kind of a story, peeling back the layers of trial to clear up all the questions you could possibly have on this subject. The TV show gives a worthy overview of the case, but its main purpose is to entertain. Toobin’s book goes in-depth in a way TV drama simply can’t.

This episode in ESPN's “30 For 30” series strays from the traditional documentary format. Instead of having talking heads take us through the events of the day, the film uses news footage to recreate the experience many had of flipping through the channels when a certain white Bronco grabbed the attention of the entire country.

On a day when the New York Rangers were celebrating their Stanley Cup win, Arnold Palmer was wrapping up his last US Open, the World Cup was just getting underway and the Knicks were battling the Rockets in the NBA finals, most viewers were tuning in to the opening chapter of what would be one of the most shocking criminal cases in American history.

“American Crime Story” has taken the Simpson trial and turned it into compelling entertainment, but when it comes to revisiting the feelings we had as we saw this story first start to unfold, this documentary can’t be beat. And it’s currently available on Netflix.

3. “Without a Doubt” by Marcia Clark

Poor Marcia Clark. Her failure to wring a guilty verdict out of the Simpson trial turned a lot of people against her. In the words of the Internet: “You had one job!”

Clark’s book is her effort to tell her side of the story, making the argument that the cards were stacked against her from the start, and that getting a jury to put Simpson behind bars was simply never going to happen.

Worth checking out, if only to hear a perspective that often gets drowned out by much louder voices.

4. “Murder In Brentwood” by Mark Fuhrman

In post-Rodney King Los Angeles, relations between police officers and the black community were strained to say the least. And for many, Mark Fuhrman -- the officer who discovered much of the evidence used against Simpson in court -- became the face of racist cops.

The fact that he was convicted of perjury for lying about his use of racial slurs probably didn’t help.

In an attempt to reform his image, Fuhrman wrote this book to refute the defense’s claims that the evidence against Simpson was flimsy. Fuhrman insists that the LAPD botched parts of its own investigation, mishandling findings that would have brought Simpson down at trial.

For “Law & Order” junkies, this is an inside look at how the cops go about building a case.

5. “The Search For Justice: A Defense Attorney’s Brief On The O.J. Simpson Case” by Robert Shapiro

“American Crime Story” doesn’t try to hide the fact that Simpson’s elite lawyers didn’t always get along with one another. John Travolta’s character, Robert Shapiro, wrote this book to explain to the American public how he and his team managed to get their client a "not guilty" verdict.

In it, he criticizes his colleague Johnnie Cochran, whom he says focused on the “racist LAPD conspiracy” story to convince the public of Simpson’s innocence. (Toobin's book makes it pretty clear that Shapiro also played a large part in this strategy.)

Shapiro instead gives a play-by-play on how weak the prosecution’s case always was – at least in his opinion – and makes the claim that the jury’s verdict was completely in line with the “beyond a reasonable doubt” principle of American justice.

6. “Triumph Of Justice: Closing The Book On The Simpson Saga” by Daniel Petrocelli

We’re not watching “American Crime Story” to see how it all pans out in the end. We're from the future, so the fact that a jury will return a not-guilty verdict isn’t going to surprise anyone.

But the story doesn’t exactly end there. After the trial, the families of Ron Goldman and Nicole Brown filed a civil suit against Simpson that resulted in him being found responsible for the murders.

Sure, having to pay out money in damages isn’t the same as true justice, but it’s a second act to a case that most people assume ended entirely in favor of a guilty man. In this book, Daniel Petrocelli, the lawyer who represented Goldman’s family at the trial, shows readers how he managed to do what the prosecution couldn’t.

7. “Outrage: The Five Reasons Why O.J. Simpson Got Away With Murder” by Vincent Bugliosi

True-crime buffs already know Vincent Bugliosi as the prosecutor of Charles Manson and author of “Helter Skelter,” the definitive book on the Manson case. His take on the Simpson trial is equally engaging.

Drawing on his legal skills, Bugliosi makes an angry and impassioned case for Simpson’s guilt. While the defense team was happy to suggest that the LAPD may have conspired to plant evidence, Bugliosi picks apart this reasoning and just about proves that it was always a ludicrous argument.

Let’s face it: Lots of people are still angry about how the trial turned out. Bugliosi is one of the angriest, but he's also one of the smartest.

Not content to merely write a book on the case, Vincent Bugliosi also appeared in this extensive video program, produced to give the general public a detailed rundown of the case. Bugliosi’s goal isn’t just to convince us that Simpson did it. He already knows most people agree with that. Instead, he wants to make sure we fully grasp just how baffling that not-guilty verdict was.

At over seven hours, this is no brief look at the case, but it’s definitely thorough, and available on YouTube.

If you’re too far behind on the rest of your binge-watching to add something as lengthy as “Absolutely 100% Guilty” to your watch list, this episode of “American Justice” covers the major details of the case, featuring interviews with many of the key players.

Consider it a bonus feature to your “American Crime Story” addiction, giving you a behind-the-scenes look at the actual events from the perspective of the real-life characters.

So, think all this should hold you over until next season?