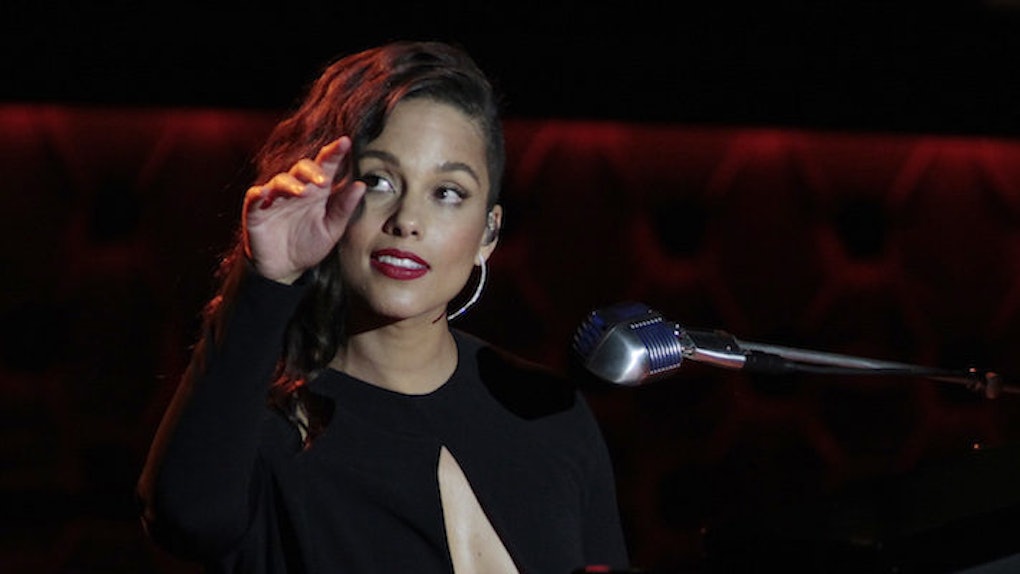 I'm a dude who does not wear makeup, and Alicia Keys' letter about not wearing makeup and being your authentic self still spoke to me, so that should tell you just how powerful and on point her letter is.

Oh, and her letter also started a #NoMakeup movement, so it must be doing something right.

In her open letter, Keys described how she always felt the need to cover and hide herself, even from a young age and continuing up through adulthood.

We all get to a point in our lives (especially girls) where we try to be perfect. Does it start somewhere in second grade after picture day when you wear your frizzy hair out 'cause your mama says it's beautiful but all your 'friends' laugh at you? You grab the brush and gel and pull your beautiful big hair back into the tightest ponytail you possibly can to contain your unique hair in a bun — hiding a piece of who you are in order to fit into a picture of what others seem to see as perfection.

If the "friends" laughing at you part doesn't hit home with everyone who grew up in America, I don't know what will.

Now, after years of being the chameleon and changing herself for the acceptance of her critics, Alicia Keys is done trying to please others. She's done hiding and she's done covering up.

It all started with something she did before starting work on her new unnamed album.

Before I started my new album, I wrote a list of all the things that I was sick of. And one was how much women are brainwashed into feeling like we have to be skinny, or sexy, or desirable, or perfect. One of the many things I was tired of was the constant judgment of women. The constant stereotyping through every medium that makes us feel like being a normal size is not normal, and heaven forbid if you're plus-size. Or the constant message that being sexy means being naked. All of it is so frustrating and so freakin' impossible.

These feelings first came out in songs, Keys said, such as "When a Girl Can't Be Herself." In the song, Keys says,

In the morning from the minute that I wake up / What if I don't want to put on all that makeup / Who says I must conceal what I'm made of / Maybe all this Maybelline is covering my self-esteem.

And Keys' negative feelings only got worse and worse over time as she became consumed by what other people thought of her. At least, that was until one day when Keys arrived at a photo shoot, without makeup, from the gym.

Over Keys' objections, the photographer, Paola Kudacki, demanded to shoot Keys as she was in her post-gym, natural state. And the impact, Keys said, couldn't have been greater: She never felt more free.

Here's a black and white version of the final photo from the shoot.

It was just a plain white background, me and the photographer intimately relating, me and that baseball hat and scarf and a bunch of invisible magic circulating. And I swear it is the strongest, most empowered, most free, and most honestly beautiful that I have ever felt... I felt powerful because my initial intentions realized themselves. My desire to listen to myself, to tear down the walls I built over all those years, to be full of purpose, and to be myself!... Once the photo I took with Paola came out as the artwork for my new song 'In Common,' it was that truth that resonated with others who posted #nomakeup selfies in response to this real and raw me. I hope to God it's a revolution. 'Cause I don't want to cover up anymore. Not my face, not my mind, not my soul, not my thoughts, not my dreams, not my struggles, not my emotional growth. Nothing.

In the time since she posted the letter, Keys has inspired others to go #NoMakeup. And, it seems like Keys means what she says because she appears to have been free of makeup herself for at least some time in photos.

Not that she needs makeup anyway because being a badass woman is always sexy.