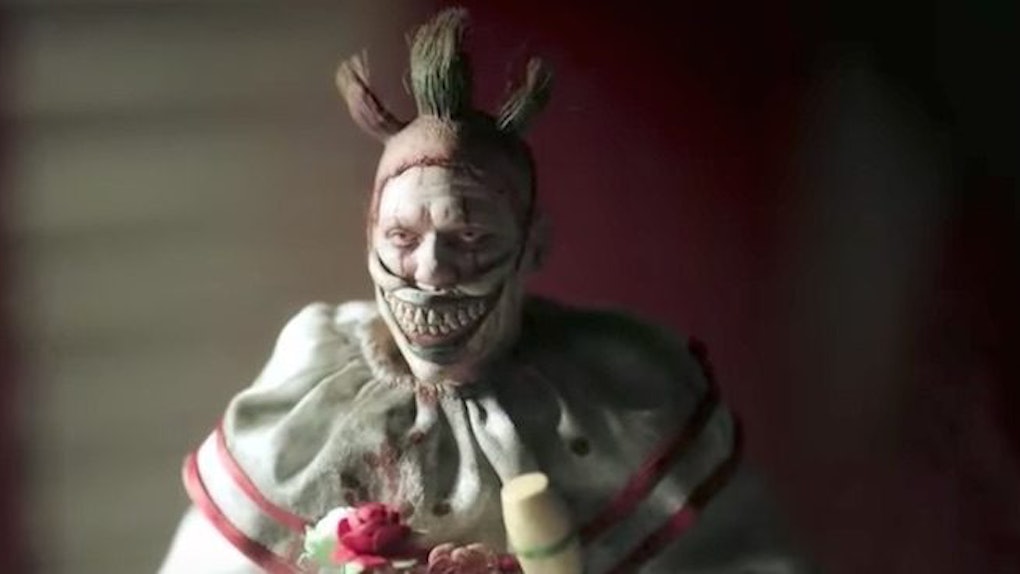 AHS: Cult hasn't even premiered yet and we're already shaking in our boots. If clowns give you the major heebie-jeebies, let's just say you'll probably want to cover at least one of your eyes while tuning in. The seventh installment appears to be sending in the clowns in a big way this season, and this American Horror Story: Cult theory connects them to the election.

We're already well aware that Cult centers on the days following the election of Donald Trump. The recently dropped trailer gives us a peak at what that might mean, and TBH, we expected more politics, fewer clowns. But this is Ryan Murphy-land and anything goes. Especially when it's extra creepy.

Sarah Paulson plays a Michigan woman dealing with the Trump election aftermath, yet her concerns don't seem limited to policy and cabinet changes. The coulrophobia -- that's fear of clowns, in case you were wondering -- increases to a fever pitch. And it's probably legit considering ALL THAT TERRIFYING CLOWN IMAGERY. The first clue is a flash of a Twisty comic book, Twisty: The Clown Chronicles. You remember this cuddly fellow from AHS: Freak Show, yes?

Then there's Billie Lourd's Winter Anderson, who appears to be some sort of wicked babysitter from hell, giving a child a Twisty figurine that is sure to haunt our souls for all eternity. The clip ends with another clown popping up in our faces to a soundtrack of screams.

You may remember the clown hysteria of 2016 that was all over the news last fall. The chilling sightings happened across the country, and while some of the events seemed harmless, a handful became violent or involved attempts at luring kids into the woods. Thrillist notes that some of the incidents took place in Michigan in the months leading up to the election of all places. Coincidence? Or not, when it comes to the AHS universe... They also recall the speculation that the phenomena wreaked widespread panic in a similar way the election did. The circus staples mirror our fears, or at least gives them a face. In a New York Times Opinion piece from back in October, writer Henning Fog theorized,"Politics and seasonal horror have found their perfect match."

American Horror Story: Cult is clearly picking up on the pairing in name of entertainment in a frightening fashion only they could execute. We'll know soon enough how this tale of killer clowns plays out. Sweet dreams, AHS fans. Don't let the bed bugs bite clowns dominate your nightmares.