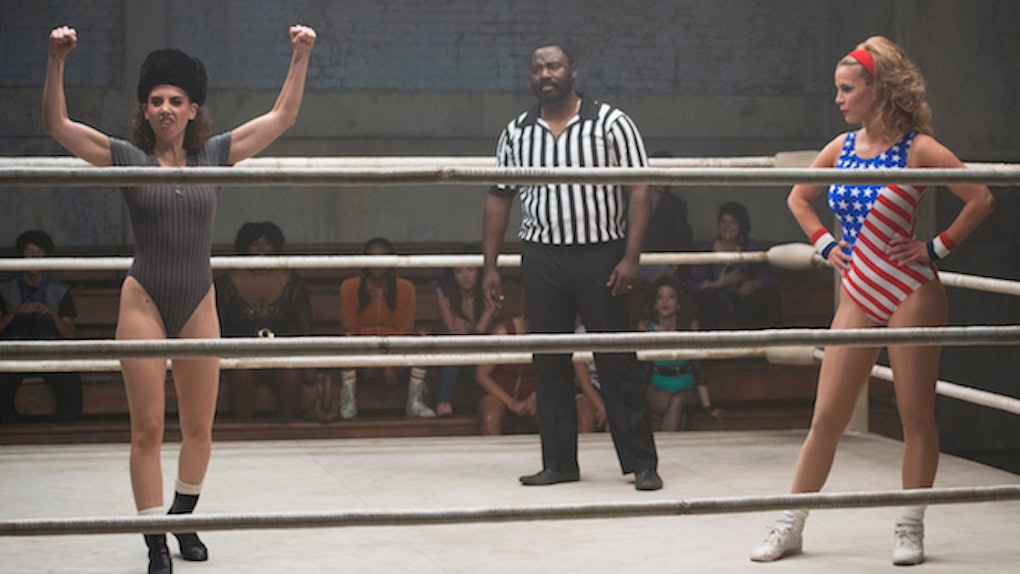 ‘GLOW’ Vs. The Real WWE: What To Know Before You Watch

With the success of Stranger Things, Netflix is heading back to the 1980s with their brand new series GLOW.

Based on the real TV show from the mid-1980s of the same acronym (which stood for Gorgeous Ladies of Wrestling), the original GLOW ran from 1986-1990. The independent sports entertainment programming was a series ahead of its time, treating the sport like the TV entertainment show it really is, and showcasing women as wrestlers who were equal to men in the ring.

But what do you need to know about wrestling before you sit down to consume the Netflix reboot when it arrives this Friday, June 23? Here are a few facts about wrestling, the WWE and the real GLOW.

Their "injuries" many times are are pre-scripted plot points. (Yes, the WWE has scripts.)

In today's world of wrestling fandom, the fakery (known in the industry as "kayfab") is well known and well documented. In fact, since the advent of reality television and social media, shows like the WWE's RAW and Smackdown use their audience's inside knowledge as part of the gag. (They also use it to spin off reality TV shows like Total Divas and Total Bellas.)

There's a reason every pay-per-view gets one of those "kids, don't try this at home" PSAs at some point during the broadcast. The men and women who wrestle for our entertainment take what are known as "bumps" on the regular. They also injure themselves regularly, some of which are then written into the script so they can go have surgery and some which are not.

3. As The Wrestling World Contracted, Wrestling On TV Expanded

Prior to the WWE, wrestling was a regional thing, with many smaller fiefdoms broadcasting events on local stations. The advent of cable (and the need for constant 24-hour programming) happened to coincide with one wrestling federation, known then as the WWF (now called the WWE), consolidating many of these independent circuits together. The wrestling world was contracting under one flagship.

But at the same time, the success of the WWF spawned just as many made-for-TV imitators who saw the success of wrestling as a fast way to get a hit show.

The original GLOW, with its all-women cast and highly '80s style gimmicks, was one of them. They also had a computer generated announce, the wrestlers would rap and the out-of-ring sketches were played for laughs.

4. That Being Said, GLOW Is Heavily Fictionalized

And it's kind of a shame too! Not that Netflix's show isn't interesting (each thirty-minute installment flies by, and in true binge fashion you keep wanting to press play on the next episode), but the original GLOW was actually created by Matt Cimber, who was Jayne Mansfield's husband (and Mariska Hargitay's stepfather).

The ladies who wrestled were trained initially by Mando Guerrero, at Barbarella's, an all-women's gym owned by Sylvester Stallone's mother Jackie. (Jackie Stallone was a regular feature on the show as well, playing the "owner" of the show, and was a "Face" throughout her time there.)

Wrestling has its own weird terminology. One of the more basic terms one should know going in is "Face" and "Heel." "Face" is short for "babyface," AKA a good guy. Some more famous "Face" characters in wrestling history include Hulk Hogan and Dusty Rhodes in the 1980s, and The Rock and John Cena in our modern era.

"Heels" are therefore the opposite of a "face." They are the villains, the ones you love to hate. Ric Flair in the 1980s was an infamous heel. Vince McMahon, whenever he has played himself on TV, is always the heel, the boss no one likes, the evil manipulator.

Some wrestling characters are always one or the other, due to their characters. But more often, wrestlers will turn from face to heel and back again over the course of their career, and as the script demands.

6. Women's Wrestling Has Always Been Treated By The Big Leagues As A Secondary Sport

The first time I saw a wrestling show, there were cage matches, villains in impossible costumes, lighting and theatrics, and a man who rose from the dead in an entrance the show still hasn't been able to top.

The there was the women's match, which involved pillows. And none of them looked like they could lift one another even if they wanted to. Over the years I watched as the "women's title" became a "diva's title" and the belt turned into a pink butterfly fit for a Barbie.

Women have always been secondary in the WWE. It's a man's wrestling show, done by men, written by men, conceived of by men. Women weren't asked to wrestle in cage matches, or ladder matches because the men simply didn't even consider that a possibility. They were there to titillate and then get off the stage so the real wrestling could commence.

7. Women Are Still Fighting For Equality In The Wrestling Business

It is ironic to me that GLOW arrives this week when the WWE has just reminded us of how far they still have to go in terms of equality.

Last year, when it looked like Hillary Clinton would win the presidency, a huge sea of change occurred in on-screen wrestling. The butterfly belt disappeared. A real belt took its place. The Barbie-looking wrestlers who might have been 115 lbs soaking wet were phased out, and actual Amazonian looking women (Charlotte Flair!) stepped up and began winning titles. There was the first ever Women's Cage Match, and the first ever Women's Iron Man Match. It seemed like the WWE had finally noticed it was the 21st century, and it was time to get with the program.

In 2017, the WWE had continued to try and pay lip service to the women's division as equal, but at every turn, they don't follow through. This past Sunday, we had our first Women's Money In The Bank Ladder Match. It was a historic event, another moment of women stepping up and competing in matches that were once unthinkable in their division. And nearly every wrestler (minus one) looked like women who could come out there and kick your ass without question.

That one, the small muscle-less wrestler, came out with her boyfriend. Said boyfriend then proceeded to climb the ladder himself mid-match, and win it for her. A reminder that though women may prove that they have the right to wrestle the same as men, men still run the show and men are still happy to undermine them and their historic moments at every turn.

We don't just need a show like Netflix's GLOW to remind us that once upon a time, there was a real women's wrestling league, and it ran on TV for four full seasons. The men who created it were jerks, mostly looking to make a buck. Yes, they also swindled the women into driving themselves into a business where people really get hurt for little pay and fewer thanks.

But those women were heroes up on the screen, and villains we could boo as warranted. They may have been misfits who were just trying to have wrestling careers. But in the ring, they were the Gorgeous Ladies of Wrestling.