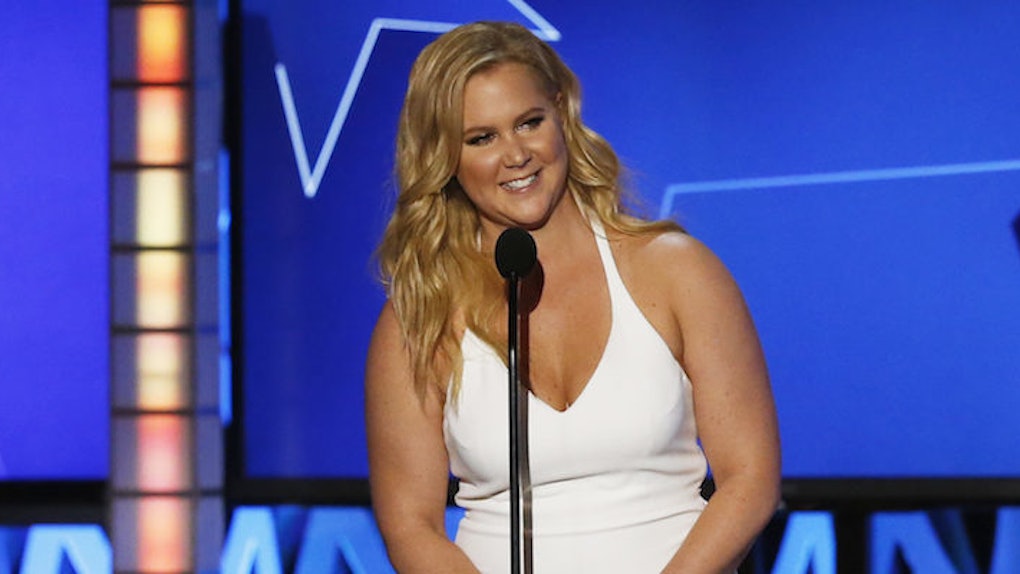 She's the woman that everyone can't stop talking about. She's not scared to spew her deepest thoughts or to discuss her love for sex and spaghetti (together or separate). Amy Schumer uses her raunchy, honest feminist comedy to take down sexism and stand up for women's rights. This feminist simply cannot be stopped. Here are 15 reasons why we love her:

Amy isn't afraid to show some leg or cleavage, or to talk about the sex positions she most enjoys. She even calls herself a “slut” proudly. Amy is making it socially acceptable for women to openly express their sexuality and to not be ashamed of having lots of sex.

2. She critiques the media's portrayal of women.

3. She says the word “pussy” proudly.

When Comedy Central tried to censor the word “pussy” on "Inside Amy Schumer," Amy fought back. She argued that saying the word “dick” on TV is perfectly acceptable, so “pussy” also should not be beeped. Comedy Central has since changed its policies, and no longer sensors the word.

4. She is making feminism appealing to women and men.

Amy is disproving the stereotypes that feminists hate men. By writing skits that are raunchy and hilarious, she appeals to both women and men. This is why 50 percent of her viewers on Comedy Central are men.

5. She is sparking conversation about rape culture.

Amy Schumer has never been one to avoid topics that are considered taboo. In her "Friday Night Lights" sketch, college football players ask if it's “OK to rape” in different scenarios, such as “if it's Halloween and she's dressed like a sexy cat.” Amy manages to be comical while making it clear that rape is not acceptable in any situation.

Amy is fighting the beauty standard that women need to be skinny by having pride in her curvaceous body and urging other women to do the same. After posing half-naked in an Entertainment Weekly shoot, she tweeted, "I want to especially thank @EW for not airbrushing me. For real very cool. Thank you. Proud size 6 yo!"

Amy has used several pro-choice jokes in her comedy shows, showing she thinks it is perfectly acceptable for a woman to get an abortion if she needs one. In one sketch, she jokes, “When [a friend] tells me “Amy, I'm pregnant,” I still don't know whether to be like, “Congratulations,” or “Do you need a ride?”

8. She supports other women.

Amy has been making headlines recently for her friendship with Jennifer Lawrence, who is another self-proclaimed feminist. When both were nominated for the Golden Globe for Best Actress, Amy joked, sarcastically, by saying, “I just blocked her number.” She later posted an Instagram photo saying “Congrats to my other sis,” and gave J Law a standing ovation when she won the Golden Globe.

9. She believes in herself.

Amy has proved herself to be a true feminist by showing that not only does she believe in other women, she also has confidence in herself. Amy gave a speech at the Gloria Awards and Gala, speaking of her previous insecurities and how she has grown. She said,

I am a woman with thoughts and questions and sh*t to say. I say if I'm beautiful. I say if I'm strong. You will not determine my story, I will. I will speak and share and f*ck and love and I will never apologize to the frightened millions who resent that they never had it in them to do it. I stand here and I am amazing, for you. Not because of you. I am not who I sleep with. I am not my weight. I am not my mother. I am myself. And I am all of you, and I thank you.

10. She called out Hobby Lobby on its birth control legislation.

In a birth control commercial parody, Amy mocks Hobby Lobby's decision to restrict their female employees' access to contraceptives through their health insurance because of the corporation's religious beliefs. In her sketch, Amy jokes that you should “Ask your mailman if birth control is right for you,” insinuating that only a woman can decide if she should get birth control.

11. She is challenging gender roles.

In her movie "Trainwreck," Amy swaps traditional gender roles with Bill Hader's character Aaron. Amy is the typical player and Aaron is the romantic. Amy likes to have a lot of sex with a lot of people, while Aaron wants to be in a monogamous relationship. This movie showed that not all men and women fit their stereotypes.

12. She has another feminist comedy in the works.

Amy reportedly spent the holidays working with Jennifer Lawrence on a script. In this raunchy comedy, Amy will play a flight attendant with her sh*t together, and J Law will play “a mess.” The two are excited to reveal their new work.

13. She thinks women are beautiful at any age.

In her "Last F*ckable Day" sketch, Tina Fey, Julia Louis-Dreyfus and Patricia Arquette have a picnic celebrating Julia's “last f*ckable” day, or the day when the media no longer deems her sexy enough to play the female love interest. Like a true feminist, Amy calls out sexism in the media.

14. She is fighting against domestic violence.

After there was a shooting at a screening of her movie "Trainwreck," Amy teamed up with her cousin, Senator Chuck Schumer, to lobby for tighter gun laws. This legislation will require background checks for anyone who wants to purchase a gun. This aims to prevent those with a history of domestic violence and severe mental disorders from purchasing firearms.

"Inside Amy Schumer" has been renewed for a fifth season, she scored a Golden Globe nomination for her role in "Trainwreck," and she was even asked to replace Jon Stewart as the host of "The Daily Show" (she turned it down). Amy has gained acclaim for saying what she thinks and standing up for what she believes in, so she highly deserves her feminist title.