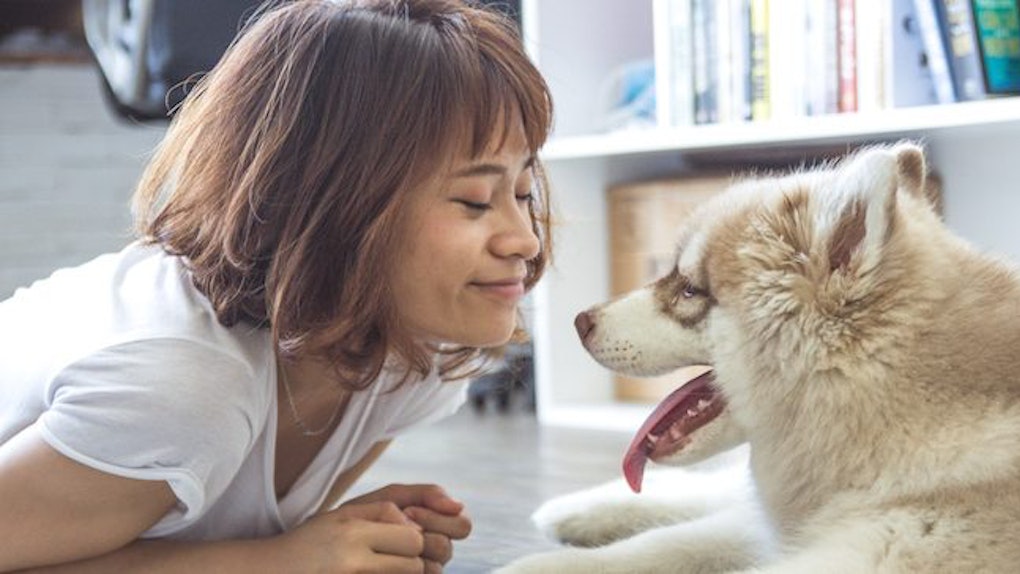 How Do Dogs Improve Your Health? 5 Ways Having A Pup Will Better Your Life

Listen, man's best friend isn't just your best friend because society says so, it's actually scientifically proven that furry little animals — specifically, dogs — make your life happier in more ways than one. When you see people walking their dogs, speaking to their dogs, and including their dogs as apart of huge plans, do not judge. These people understand the key to happiness and are absolutely doing something right in life.

When it comes to companionship, you have to choose wisely, and to put it frankly, especially in today's modern world, companionship from a four-legged pup can be so much better than from the human next door. It's sad to say it, but hey, science has backed this one up. There have been tons of studies conducted on the health benefits that canines have on our overall health, and the results are pretty eye opening.

From boosting self-esteem, reducing negative emotions, and improving an overall sense of self, dogs do more than just sit there and look cute. When you step through your door and are joyfully greeted by your canine, that actually has a measurable impact on the state of your psyche.

Below are five ways having a dog can increase the betterment of your life:

1. Your Dog Will Introduce Fitness Into Your Life

I'm not talking hardcore fitness, but enough to make a slight difference or… get you started or… at least get you moving.  According to a study published in the National Center for Biotechnology Information, dog walkers walked, on average, five hours a week, compared to non-dog walkers, who walked just about three hours a week.

That extra two hours a week of fresh air and light cardio could be all you need to improve your state of overall health, and you may not even know it.

2. Your Dog Will Help You To Hoard Less Negative Emotions

In a study published in the Journal of Personality and Social Psychology, researchers subjected 97 pet owners to a negative social experience. Participants were then asked to either write about their best friend or their pet, and, for the control group, draw a map of their college campus. Results from the study showed that people who wrote about their pets showed zero negative feelings and were just as happy, even after the negative social experience, whereas, the control group still harbored those negative emotions.

So, if you want to learn how to let that sh*t go, get a dog!

According the director of the Research Center for Human-Animal Interaction at the University of Missouri College of Veterinary Medicine, Rebecca A. Johnson, PhD, who spoke to Health, pets contribute to boosting self-esteem. "Pets are completely non-judgmental, don't have an agenda, take you at face value, and they don't care what you look like or how you behave — they love unconditionally, and that boots self-esteem," she said.

Besides, a study (same as above) published in the Journal of Personality and Social Psychology, found that dog owners tend to have higher self-esteem.

4. Your Dog Can Make You More Attractive

As in, to the opposite sex. Yep — science is vouching for this.

According to research conducted by Dogs Trust, the UK's largest dog welfare charity, owning a dog can help make the act of approaching someone a little less awkward. Of the 700 respondents who took a survey, over 95 percent said that they would feel more comfortable speaking to a stranger if he or she had a dog. For those who provided a reason behind this, two thirds said dog owners seem friendlier and more trustworthy.

Pro tip: if you're looking for love, get off Tinder and get yourself a dog.

I mean, between an increased level of fitness, more social interaction, reduced negativity, and a greater self-esteem, it's a no brainer that your puppy will, without a doubt make you a happier person.

But besides that, a 2009 study showed that the brain releases more oxytocin after interacting with a dog.

See? This is not a game people. Your pup serves a purpose.

There's a reason why people want to cuddle with their pets after a long day, or why people refer to their pets as if their actual members of the family: They are. Your puppy can do more for your mental health and well-being  than you've probably ever imagined. How's that for man's best friend?