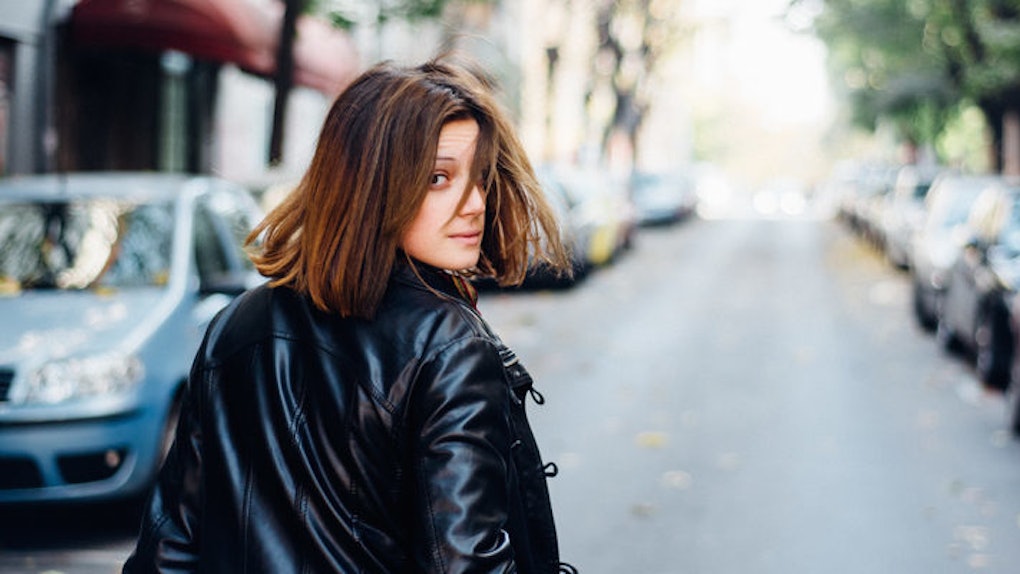 I Ran Into My Ex On The Street, And I Survived

Every girl's nightmare finally happened to me. Recently, on a Thursday -- a Thursday that I thought would be like any other -- I ran into my ex on the street.

My ex and I had a complicated relationship. It was on-and-off, hot and cold, up and down. One minute, he wanted to be my boyfriend, and the next, he wanted move to a different country to pursue his DJ dreams.

The break-up was mutual but messy. It went down a year ago. We stayed in touch for a while, but it didn't benefit either one of us; we were simply too different. We tried staying friends one final time, but it ended in betrayal and disappointment and arguments about who was more f*cked-up.

My very last words to him were "I hope you find what you're looking for." His very last word to me -- while slamming the door behind him -- were "Sayonara." Our ending was painfully bitter.

You have to trust me when I tell you I never thought I'd be able to move on from him. One summer, we got into a fight so big that I went home and didn't move from my twin bed in my stuffy, coffin-sized bedroom for three days. Three whole days. I lay curled up in a ball, so depressed that even my body was too numb to produce tears. Fast forward to three years later, when I hardly think about him anymore.

Last Wednesday, the night before I saw him, I was staying over at another guy's place. It wasn't a guy I'm seeing seriously, just a guy that keeps me busy when I'm feeling, uh, restless.

We had a nice night, and when I woke up the next morning, I was in a pretty good frame of mind. I hadn't slept very much and was debating over whether I should wear my chic, all-black, hip-hugging outfit or throw on my dude's sweatshirt and call it a day.

F*ck it, I thought. I'll go with the all-black. Maybe I'll even rock my loud fuchsia lipstick. I'm only young once.

I was even blessed enough to still have bed-head. It's safe to say I looked unusually good. All smiles, I trekked to work.

My co-worker Gigi and I had just gotten out of our morning meetings when we decided to run out and grab some coffee. We were gabbing about all the f*ckboys in our lives -- typical girl stuff -- as we approached the sidewalk outside my office. In my peripheral vision, I caught sight of a blond guy walking toward us.

I turned forward to face him. Hmmm, he's cute, I thought to myself. Still immersed in conversation, my mouth was moving at a mile a minute. Then I realized something. The blond was my ex. The stature, the metallic sunnies, the slightly off-center nose. Yep, it was him. He looked just like I remembered him.

My mouth stopped moving. He stared at me and I stared right back at him.

"That's your douchebag ex?!" She stood silent in solidarity, jaw on the ground and all, right there with me.

He passed us, looked briefly back at us, and kept walking while we continued standing there, staring at him. We didn't speak a word, but the glances we exchanged spoke a thousand words.

And I can't help but laugh again at the pure irony of my circumstances: I was knee-deep in gossip about f*ckboys; I almost didn't wear an outfit that slayed; I left another man's apartment that morning with only that man on my mind.

You know that cliched-as-hell theory that you'll see your ex when you least expect it? It couldn't be any more true. When it happens, yes, it will seem unbelievable. Yes, you will run home and tell all your girlfriends. Yes, you will be in shock, and you'll have to find a way to force your blood back into circulation. But there's no feeling more free than seeing someone you thought you'd never get over and feeling nothing. Not one thing.

If Gigi and I had left just 30 seconds later, we wouldn't have seen him. Was it fate? Or just coincidence? I don't know, but maybe things like this do happen for a reason: to remind us how far we've come and how strong we're capable of being.

Because sometimes we can't tell just how much we've changed until we're smacked in the face with something brutally obvious. I know I couldn't gage my own progress until last Thursday.

I never thought I'd be ready to see someone who spent nights inside of me, holding me and telling me he loved me after our relationship had ended. I expected to feel heartbroken all over again. I certainly never expected to laugh it off.

If there's anything I've learned from seeing him, it's that I can overcome anything. And if I can, you can. More likely than not, you won't see him when you want to; you'll see him when you don't need to.

When you do see him, you will survive. The fantasy of running into an ex is more jarring than actually running into him. Remember: He's your ex for a reason. It doesn't matter how good or not-good the relationship was; as long as you have faith in yourself, you'll be surprised how resilient you can be.

On a day when you look put-together but effortless, feel fabulous but unprepared, and expect nothing but the usual, you will see your ex. And if you're lucky enough, you truly won't give a damn.