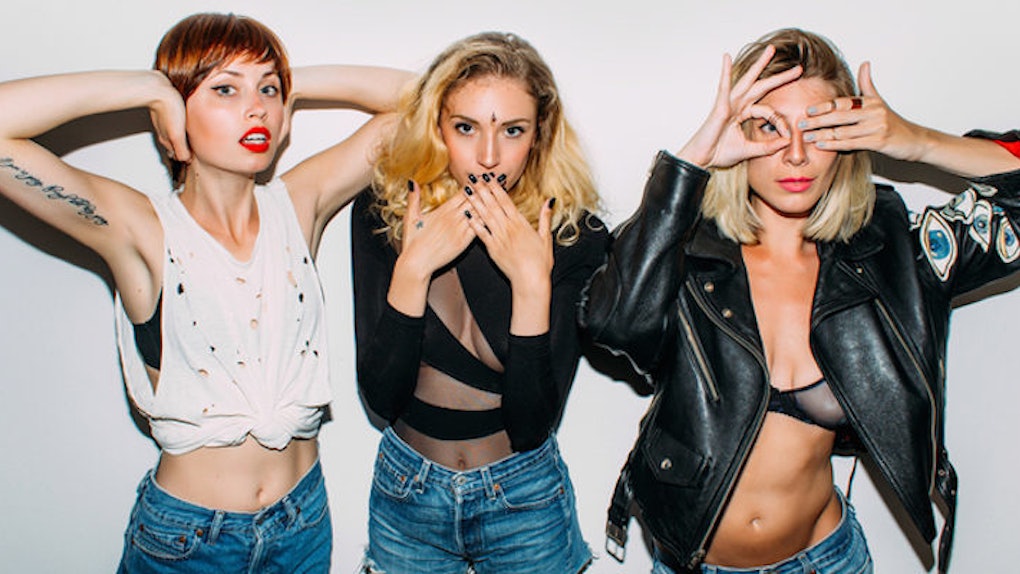 Being the “crazy” girl when it comes to dating seems to have become everyone's worst nightmare (thanks, dudes). I say this only because I wake up to a minimum of one text every morning from one friend or another panicking about the “crazy” thing they did last night or begging me to help them draft a text that doesn't come off as “crazy.”

I, myself, have struggled with this fear big time. But what's funny is that I've started to notice that all my fear has managed to do is make me more crazy. That's because when you think about the working definition of “crazy” we have created for ourselves, it's basically any display of emotion ever.

As you can imagine, avoiding any display of emotion ever in a romantic relationship that is realistically totally charged with emotions is pretty unnatural. And, as a result, pretty insane.

What's funny is that these rules don't even work! Seriously. I followed them religiously for the large majority of my (admittedly short) dating career, and I would bet large sums of money that there are probably some ex-flings who think I am an absolute lunatic. Because denying your feelings is pretty insane, too. Especially when the person you're seeing would rather you just be up front.

I mean, think about yourself in these situations. Would you rather someone be elusive and weird, or just tell you what they're thinking? I, personally, choose the latter.

I have decided to draft a list of everything women have, for one reason or another, decided is “crazy” in dating. Read through and realize HOW CRAZY trying to not be crazy really is.

OK, first of all, liking him in the first place? Total freak move.

2. Telling the person you love that you love him.

OMG … you love someone you talk to every day and regularly have sex with?! Are you completely INSANE?

Only thing worse than catching feelings is admitting you have them.

Why would you TELL him what's going through your head? That's so unnecessarily dramatic. Just ghost him. Then complain when the guy you actually like ghosts you.

5. Responding to a text too quickly.

Respond immediately and let him know you were desperately sitting by your phone and waiting for his text to come through like some sort of pathetic, clingy, obsessive LOSER … ? No, thank you.

6. Sending too many texts in a row.

You can maybe get away with two if ABSOLUTELY necessary. But any more than that, and OMG, you are a certified lunatic.

And don't think you can avoid the whole double texting problem by consolidating your two texts into one longer message. That is crazy, too. Just, like, try to have less thoughts you want to share.

8. Having the last word in a text conversation.

No matter what happens, whoever has the last word LOSES.

9. Spending too much time “typing” in the text box before you send your message.

Yeah, so obviously you're going to draft any and all texts in your notes, THEN copy and paste them into the text box, just like a totally normal, sane person would do.

10. Caring when the person you've been hooking up with screws you over.

12. Saying something when you feel like you were screwed over.

Thinking you were screwed over and complaining to your friends about it to no end while you either ice him out or pretend like everything is totally fine is one thing. But actually TELLING him how you feel? You've lost it.

13. Wanting to be exclusive.

BUT WHY WOULD YOU WANT THAT WHEN YOU CAN HAVE MULTIPLE RELATIONSHIPS MAKING YOU THIS INSANE?

14. Saying that you want to be exclusive.

Only thing worse than wanting it is saying it. As per usual.

15. Wanting more than whatever vague casual sex agreement you have as of now.

Why would you want more? Because you like him?! See #1. You're a psycho.

16. Being the first to bring up the “what are we” conversation.

If he wants to know, he'll ask you. If you want to know, it is your duty as a sane girl to shut up.

Crying is the absolute most crazy thing you can do. NEVER cry.

18. Hanging around for too long in the morning.

You're a cool busy girl with places to be. GTFO of there as soon as the sun comes up!

Um, have you heard of texting?

Only thing more insane than calling.

21. Opening his Snapchat too soon.

And letting him automatically KNOW just how obsessed with him you really are.

22. Watching his story when he didn't watch yours.

And just admit that you're more into him? HARD PASS.

23. Requesting him on social media before he requests you.

LOL, could you BE any more obsessed with him?

24. Social media stalking of any sort.

OMG and — even worse — accidentally liking one of his pictures.

25. Being a normal human with normal communication skills.

Because being sane means being a sociopathic robot, duh.