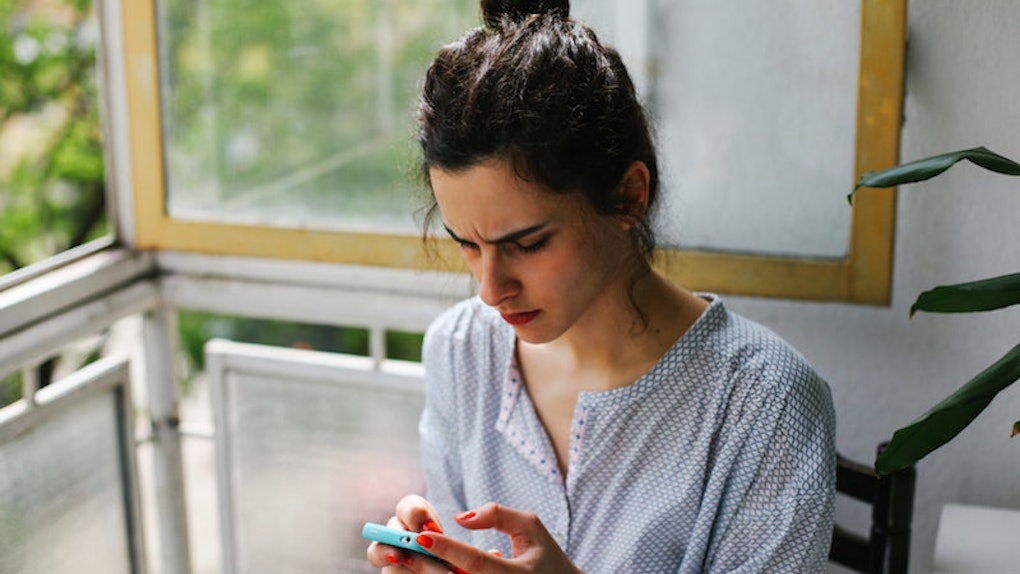 Social media is definitely taking a toll on our lives.

Some people argue that social media has ruined the idea of dating, since we now know so much about our crush before we've even gone on a first date.

What I hate the most about social media is the purgatory we are put in between Snapchat and texting.

Snapchat is seen as a more casual way to chat for a few hours or so, but in all honesty, if you're going to Snapchat someone all day… why wouldn't you pick up your phone and text them instead? Are they really that cheap?

I don't get it. Who wants to see the SAME picture of someone's face a million times in a row?

And then, to add insult to injury, sometimes you just don't know why someone is Snapchatting you instead of texting. Is it just more convenient? Can they not be bothered to text you?

Here are three questions you should ask to figure it out.

But for some reason, they don't like you enough to go to iMessage and send you a text.

Then why are they wasting their time?

Chances are if they're Snapchatting you, they most likely know you, which means they probably have your number. But texting you would just be way too much work, wouldn't it? You'll have to let your gut be your guide on this one.

If they Snapchatted you first, you can safely assume they do want to talk to you.

But make sure you know if it was a mass Snapchat or one directed at you specifically.

How can you tell?

It's difficult sometimes. But let's be real. The more vague the Snapchat, the higher the chances that it's a mass snap.

Anyone who has ever been in "Snapchat purgatory" can agree that it's extremely annoying. You want to stop responding, but you can't.

You want to ask them why they keep Snapchatting you because texting would be way easier and less awkward.

You want to punch whoever created this notion of Snapchatting over texting in the face because IT SUCKS.

Maybe Snapchat is simply a more casual way of communicating with other people and it's as simple as that.

But maybe it's a way for the person Snapchatting you to receive the attention they need to feel good about themselves. Maybe it has nothing to do with YOU, but everything to do with you simply answering their mass Snapchat.

We may never know unless we confront the ones who leave us hanging by a frayed string in "Snapchat purgatory." And we all know that's not going to happen.

So we will sit here and we will wonder until we can't wonder anymore.

Thank you, Snapchat for making life a little more complicated that it needs to be.