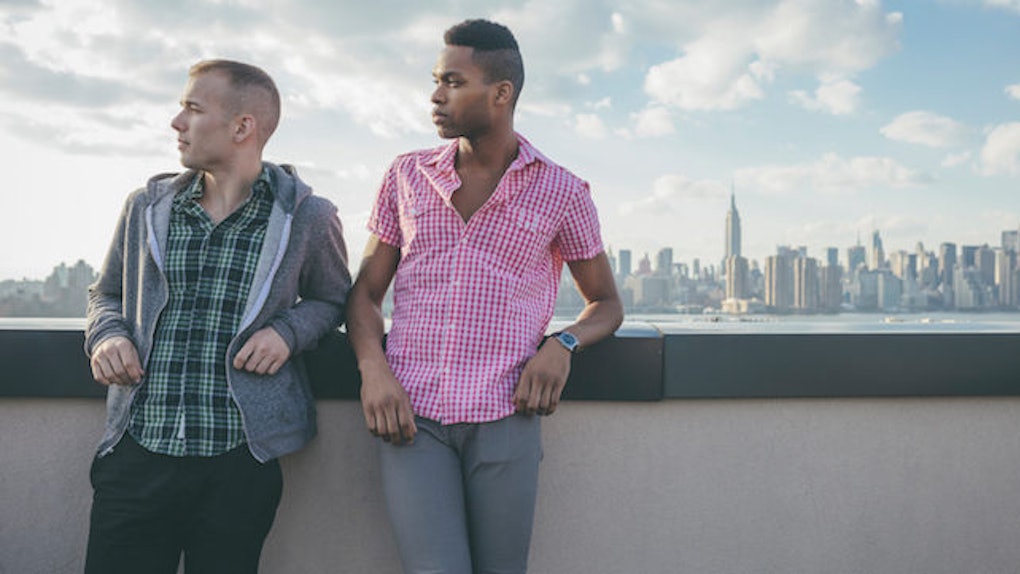 As someone who crawled his way out of the closet three years ago, you would think I'd have picked up on more telltale signs of blatant homosexuality.

Unfortunately, I'm still as oblivious as most others, and unless a man's penis is dangling right in front of me, odds are, I have no idea what their true sexual orientation is.

Dating apps like Tinder and Bumble have different settings that make it incredibly easy to figure out. And gay bars are called gay bars for obvious reasons.

Aside from the more in-your-face signs, the aesthetics of gay men and straight men aren't as different as you think.

Grooming and making sure you look comfortable and well-kept has become time well-spent for all guys — not just us fashionable queens. It seems like straight guys have to balance their gym time with their manicures and spray-on tans.

There's certainly nothing wrong with a little maintenance, but with all that upkeep, how are straight women going to differ between the put-together bros and, well, guys like me?

Below, you'll find three ways to tell if he's gay or if he's just an attractive, well-dressed straight man.

1. Boobs do absolutely nothing for him.

You finished your weekly squat routine at the gym, and as you were hurrying out, you accidentally knocked over a beautiful man's orange mocha Frappuccino.

Feeling terrible (while catching his perfect blonde hair and round ass), you exchanged numbers, promising to make it up to him.

While you never met for that cup of joe, you have been sending him flirty texts and the occasional half-naked selfie in hopes this expensive membership makes you fit and finds you love.

His response? A solid thumbs up!

And instead of a coffee date, he offers to take you shopping. That bra you had on is sooooo not your color.

2. One of his favorite hobbies is grinding on other dudes.

It's a night out with the girls, and as you push your way to the crowded bar, you end up sandwiched next to a particularly tall, dark and handsome gentleman.

Are those leather pants he's wearing? It's too dark to tell, so you flutter your eyelashes in pursuit of that free drink and, hopefully, some quick mouth-to-mouth action.

You're a classy lady, so even though he bought you (and himself) an iceless cosmopolitan, you give him space and watch from afar as he dances awfully close with his equally cute friend to Ariana Grande's "Into You."

Oh, and it looks like he knows all the words, too! Can this be any more perfect? It's like you were definitely made for each other.

3. He basically tells you he's a flaming homosexual.

You've buddied up with that new guy at work, and after some witty banter and lunch breaks at the Gap, you finally made weekend plans for a movie.

You're not exactly sure if he's into you, but fingers crossed he finally makes a move during this digitally-remastered afternoon showing of "The First Wives Club."

The lights are dim, and you can't help but stare as he tosses popcorn into those perfectly crafted, shiny lips.

You start to lean in and... is that strawberry you smell? He immediately realizes your intention and stops you short.

"Girl, let me let you in on a little secret," he says.

He tongue pops and goes back to watching the movie.

Is that obvious enough for ya?