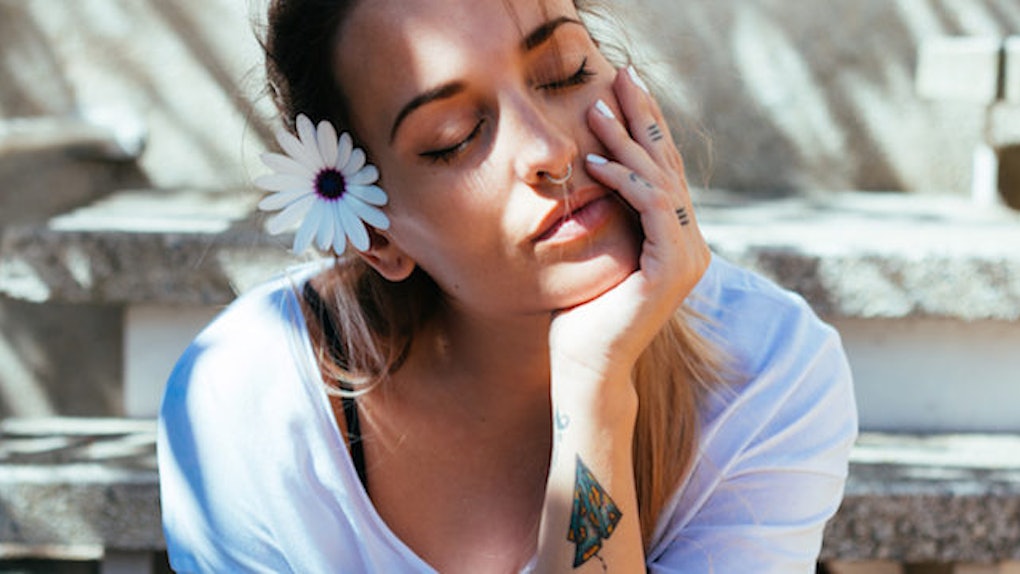 Why You're At Your Sexiest Right After A Breakup

I have a sick confession to make: I feel a little sliver of jealousy when I find out a friend of mine has just had her heartbroken.

I know it's twisted, but no amount of antidepressants or therapy quell the envy I feel for the brokenhearted.

Yes, I feel horrendous for her (sort of). Yes, I'm wildly empathetic to how broken she feels (sort of). However, I can't help but feel envious because I believe that when you're heartbroken, you're also at your sexiest.

I believe that when you're heartbroken, you're also at your sexiest.

I know I sound like I've really lost my mind this time, but please hear me out, sweet kittens.

When you're heartbroken, you have this really powerful, glittering ~aura~ that follows you around like a flattering shadow. You exude a profound "I'm going through something epic" energy that's fascinating.

"What's that girl going through?" we ask ourselves as you walk by us, a beautiful, forlorn expression sprawled across your complex face. It's clear you're in the thick of something, and as curious entities, we're dying to know what that something is.

You also have this sexy, effortless, "I don't give a fuck" attitude. And there is nothing in the world that turns me on like a woman who doesn't care what anyone thinks about her. Not in a false Instagram-meme, transparent, millennial way, but in a real way.

And when you're heartbroken, your world feels like it's crashed and burned into a million pieces. So who cares what the tired masses think of you when you're devastated from a breakup?

This is when women say how they really feel. They don't hold back. They stop being so damn polite and they aren't afraid to tell you you're acting like a dickhead.

Oh, I'm getting turned on just thinking about it!

Being sexy is all about being your most authentic, raw self. And breakups strip you of your protective outer shell and leave you exposed.

Then, the real you is on display, baby, and it's so refreshing. We're tired of all of these protected, guarded plastic girls. We're ravenous for something with more soul. And your gorgeously pained soul is all you have when you're heartbroken.

Breakups strip you of your protective shell.

A woman who has just had a breakup also has an air of wild recklessness about her. She's experienced the worst thing (or at least what she thinks it's the worst thing) that could possibly happen to her, so she's fearless now.

She's got an instability about her — an unsteadiness that keeps us on our toes.

And Ms. Leah will walk into the office, and we'll all sit up a little straighter. We'll all be tapped into Leah's energy because we don't know if she's going to be drunk, happy, enraged or in a heap on the floor. And that kind of unpredictability is hot.

It gets all the attention, and we flock to her. Because we all want the girl who garners the most attention, right?

But the most beautiful aspect of a woman who's healing from breakup wounds is the ~breakup glow~.

Something about a breakup works wonders for your complexion. And it's probably because a breakup is like a purge of epic proportions.

You're digging deep beneath your surface and pulling out all the toxins that have clogged up your pores and your life.

And that's what bad relationships usually are — dirt and bacteria that fester deep inside of you. The longer it's there, the bigger it gets. Your life becomes so congested, you don't have room for air or for new opportunities.

And when you do finally get a deep clean, of course it's going to hurt! Just like extracting a blackhead hurts, extracting a human being from your world is one of the most painful procedures possible.

Extracting a human being from your world one of the most painful procedures.

But it's also the most life-changing thing that can happen to you.

It's uncorrupted and open to new experiences. It has a fresh start, and we can all feel the sense of pending adventure radiating all around of you. It's an energy the rest of us are hungry for, but we're still too full of toxins to take in anything new.

So, babes, if you're in the midst of a breakup, trust me, I know it's gut-wrenching.

Sometimes, the foundation needs to come tumbling down because it was weak and unstable to begin with.

When your entire world has crumbled before your poor, little eyes, all the pieces of your once-stable foundation are scattered everywhere. It's chaos.

But now, you can take those pieces, and rebuild the foundation with your own capable hands, in any shape you want. You're a fucking architect, babe.

Sometimes, the foundation needs to come tumbling down because it was weak and unstable to begin with.

There is just something so intoxicating about a person who is in the powerful place of rebuilding her own life. It's inspiring. It's empowering. And most of all, it's sexy.

There is just something so intoxicating about a person who is rebuilding her own life.

There is no sexiness without soul. And you might not have bae right now, but girl, you got soul.