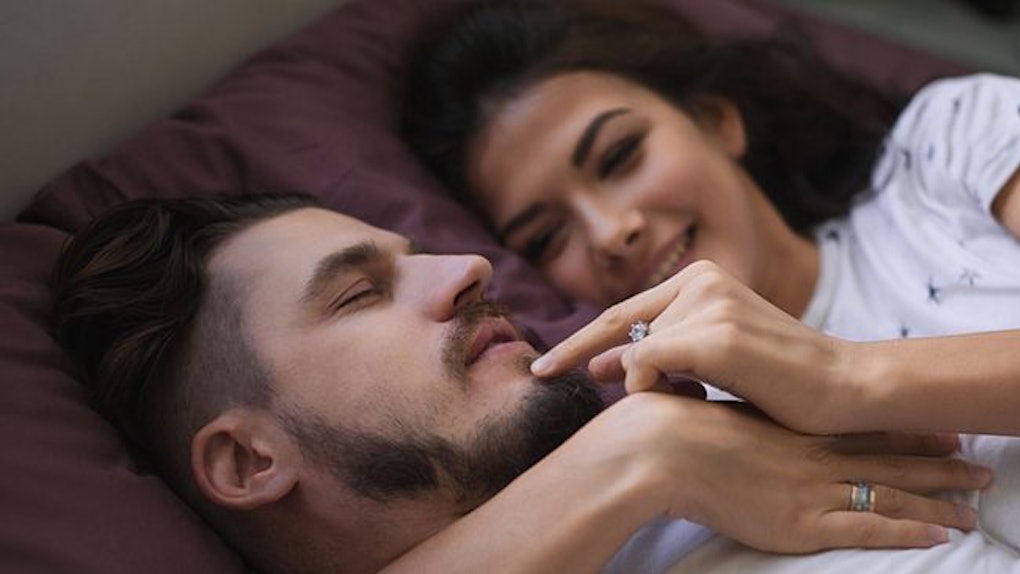 Why Does Sex Create Attachment? The Science Behind Sex & Feelings Of Love

Sex has made me do some dumb things over the years. Including ending up in relationship I didn't plan, simply because I got attached when we hooked up. Not because the sex was so mind-blowing that I couldn't give up that sweet D, but because the sex tricked my brain into thinking he wasn't the most emotionally stunted jerk on the planet. (He was.) But why does sex create attachment like this, even when you know better?

It took two long years, but eventually the logical side of my mind won the battle and I cut him loose. Still, despite knowing the relationship would never work, my heart was broken. I wondered, "How could I ever feel this way about someone else?" It was all very dramatic. But it didn't take long after getting him out of my system — literally, as it turns out — for the clear vision of hindsight to reveal how totally terrible that relationship was.

The good news is, I am far from being the only person to find myself in this situation. “It can be very common to feel attachment to someone after sex, since the brain releases oxytocin during arousal, stimulation of the genitals and nipples, during intercourse or orgasm. The release of this hormone after being physically intimate may cause a feeling of attachment and closeness,” sexologist Tanya M. Bass tells Elite Daily.

So, in other words, if my story is resonating with you, don’t be hard on yourself for getting attached. As it turns out, it's all about the brain chemistry.

1. The Love Hormone Is Real — And It's Powerful

Are you getting attached anytime you have sex with someone new, even if you didn't really think they were "relationship material" before y'all got busy? Don't blame yourself, blame the oxytocin that's released during sex, flooding your post-coital body and making you want to cuddle and connect.

2. Parts Of Your Brain Literally Shut Down During Orgasm

If you've ever thought your orgasm drove you "out of your mind," you're not actually that far off. As it turns out, the lateral orbitofrontal cortex actually shuts down during an orgasm. Why does this matter? “This region is considered to be the voice of reason and controls behavior," Medical Daily explained, in a story published in April 2014 titled Brain On Sex: How The Brain Functions During An Orgasm. “Many people feel a sense of confusion, weakness, or feel foggy and unsteady,” adds Bass.

Essentially, your brain shuts down and floods with cuddle hormones.

Have you ever had that friend (or maybe that friend is you… no judgment) who seem to be almost addicted to love? They jump from relationship to relationship, or keep taking back a partner who might not be the best influence. Well, they may be suffering from a type of addiction. It's called oxytocin dependency, and the struggle is real. “Many people find pleasure and thrive off the feelings that this hormone produced,” says Bass. “The release of the hormone can increase testosterone production in many individuals which can increase libido, feelings of lust and attachment.”

Oxytocin activates the reward center of the brain, creating a sense of euphoria. In fact, it lights up the same parts of the brain that heroin does. That cycle of reward can create a literal addiction to the neurochemical response to love. Yikes.

When you break it down and dig into the science, the attachment many people feel after sex can seem a lot less romantic. But, it can also be a relief to know a lot of what you're feeling isn't something you can control. It's your brain, and those pesky hormones doing what they've evolved to do. So while you might not be able to stop yourself from getting attached, you might at least be able to recognize what's happening. And knowledge (especially about how not to get caught up) is power.

This post was originally published on 9/29/17. It was updated on 8/15/19. Additional reporting by Rachel Shatto.

This article was originally published on Sep. 29, 2017